It was attended by some of the winners of the MMFF 2018, as well as by officials of the MMDA (Metro Manila Development Authority) led by MMDA and MMFF Chairman Danilo Lim. The event also served as the official launch of the MMFF 2019, which will coincide with the Philippine Cinema Centennial celebration and MMFF’s 45th year.

At the launch, the following details were announced regarding the MMFF 2019 enties:

-Deadline of submission of Letter of Intent: April 1, 2019 (Monday)

-Submission of Scripts and other required documents: May 31, 2019 (Friday)

-Submission of finished film and other required documents including official trailers:

Most movie companies though just sent representatives to receive their plaques, including Viva Films, whose film Aurora bagged the second best picture award.

In his short speech during the event, MMDA Chairman Danny Lim, lauded the inclusion of Rainbow Sunset in two international film festivals namely the Stockholm and Houston International Film Festivals. He also encouraged both moviemakers  and moviegoers to support MMFF’s regional short films such as Aria, which was produced by Angeles City’s Holy Angel University.

Aria, directed by Carlo Catu, is about the struggles of the hukbalahaps during the second World War. It will be released commercially within the year and will have a premiere screening in Pampanga. 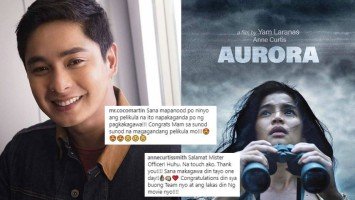