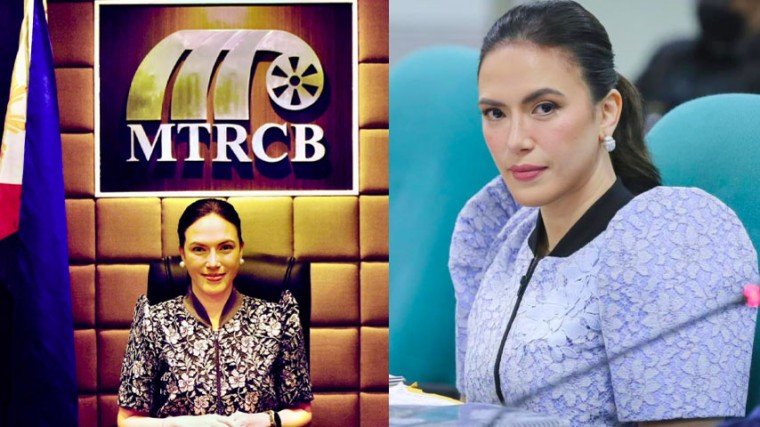 A former councilor of Quezon City, Lala Sotto-Antonio belongs to the Sotto clan. Her father, Senator Tito Sotto, may have had his share of political issues, but her mother, the actress-singer Helen Gamboa, has a spotless reputation in show business. Since she has a name to protect, Lala is well-advised to study carefully the moves she will undertake if ever she decides to regulate streaming services. Maybe she can look back and learn from her predecessors – most of whom were highly-accomplished men and women prior to being appointed to the MTRCB, but left this world with their reputations tainted.

During a recent budget hearing that would determine how much funds should be allocated to the Movie and Television Review and Classification Board (MTRCB), Senator Robin Padilla called for stricter measures to regulate streaming services online.

His concern to protect minors is understandable. As a father to several children (by different women, that is), he clearly doesn’t want young minds corrupted by lascivious content on the internet.

Sadly, there is not much newly-appointed MTRCB chief Lala Sotto Antonio can do to help monitor shows on Netflix, Vivamax, Viu and other streaming services. She wasn’t lying when she said that the scope of her agency is limited merely to classifying content on TV, tele-radyos and, of course, the movies.

And it was prudent of her not to have issued any statement about what the MTRCB plans to do about the excesses on the internet. All she said was to give her time to discuss the issue with her board members.

But does she really want that additional burden of running after sex scenes uploaded on YouTube and other platforms?

A former councilor of Quezon City, Lala belongs to the Sotto clan. Her father, Senator Tito Sotto, may have had his share of political issues, but her mother, the actress-singer Helen Gamboa, has a spotless reputation in show business.

Since she has a name to protect, Lala is well-advised to study carefully the moves she will undertake if ever she decides to regulate streaming services. Maybe she can look back and learn from her predecessors – most of whom were highly-accomplished men and women prior to being appointed to the MTRCB, but left this world with their reputations tainted.

For several years during martial law, the censors board was under the military. That was a tough time for filmmakers and TV producers. No one in the board seemed to understand art. Films were simply mutilated if there were scenes that were deemed offensive to the senses and especially if the story contained elements that were critical of the government.

And then in early 1982, the intelligentsia of the local film industry rejoiced when President Ferdinand Marcos assigned as censors chief Maria Kalaw Katigbak. The agency was then still called Board of Review for Motion Pictures and Television – or BRMPT.

Katigbak had the best credentials – a true overachiever. Born to accomplished parents, she managed to duplicate the achievements of her father and mother. Her father, Teodoro Kalaw, for instance, was the first head of the Board of Censors. She also became censors chief five decades later.

Her mother, Pura Villanueva, was the first Carnival Queen. Maria also became a Carnival Queen, who by then was also called Miss Philippines.
In the 1960s, Maria became a senator. Ferdinand Marcos was among her colleagues. Marcos originally wanted Carmen Nakpil to head the censors’ board. She refused the job and recommended Katigbak instead.

Film industry members were overjoyed. The honeymoon stage, however, was brief. Katigbak had the youth-oriented flick School Girls banned for exhibition. The film contained no nude scenes and was basically harmless since its stars were Dina Bonnevie, Maricel Soriano, and Snooky Serna. No one among them was a bold star.

More arbitrary rulings followed. This angered the local artists who denounced Katigbak by staging rallies. The industry and groups of serious moviegoers (academicians mostly) asked for her head. The public outcry reached Malacañang. The task to tell Katigbak that she was being replaced was given to then First Lady Imelda Marcos.

The story goes that on August 21, 1983, Mrs. Marcos invited Katigbak and Nakpil to a late lunch at the Gloria Maris restaurant at the CCP Complex. That was where the First Lady was supposed to drop the bomb on Katigbak. But before they could even start eating, Mrs. Marcos was called back to the Palace. Ninoy Aquino had been shot at the tarmac. Ninoy’s death saved Katigbak’s neck that time.

It took another two years before Katigbak was finally ousted. And this – she learned only from the papers. In her anger, she called the private line of Marcos and screamed at the President. Only she was capable of doing that.

Katigbak died quietly in 1992. In her lifetime, she contributed a lot to society. She headed the Girl Scouts and became active in the Red Cross. She also pushed for consumer rights and lent her name to various causes. Today, it is saddening to note that show business generally remembers her as the censors’ head who was the enemy of the industry.

Another much-maligned MTRCB chief was Manoling Morato. The son of Quezon City’s first mayor, Tomas Morato, Manoling was a gentleman to the core. He was a respected businessman and art patron prior to his appointment as MTRCB chair.

A product of the old school, he was very conservative in nature and that reflected on the board’s decisions. That also led to clashes with the industry. He was called names, really vile names. Till the end, he was still despised by movie workers. This was a pity since he was basically a good person.

Henrietta Mendez is practically in the same mold as Manoling when it comes to views. She was a much-admired Miss Caltex winner. A lawyer by profession, she was a beauty and brains combination.

Her undoing was the board’s decision to delete a scene in Schindler’s List, a very important film about World War II, which claimed millions and millions of lives in Europe and in the Pacific region.

For all the deaths that World War II claimed and the maiming of both soldiers and civilians – plus the rape of countless women, it was unthinkable for MTRCB then to play it coy. The objectionable part they wanted to delete? One scene of breast exposure.

To this day, Mendez’ name is still associated with the controversies that surrounded the local exhibition of Schindler’s List.

The MTRCB heads starting from Marissa Laguardia all the way to Jeremiah Jaro had an easy time. Purveyors of sex in the movies had found a new outlet by then – videos. They didn’t have to contend with the MTRCB anymore because they made adult films that were intended to be shown on DVD.

And now, the new outlet is cyberspace, which is quite difficult to regulate. To be fair to some streaming services, there are those that issue their own classification. Admittedly, there are also those that go overboard.

Will the MTRCB push for a new legislation that would allow the body to have power over online shows? If ever such bill is passed and enacted into law, the question is: Would they have the manpower for it?  Putting more people to monitor streaming services, including YouTube, may prove to be unmanageable for the chair.

For sure, some sectors are also bound to cry: Censorship! There will be further divisiveness in this county.

Of course, it is really up to Chair Lala to decide. Whatever her decision is should be respected. What’s important is for her to push for her beliefs and convictions.

But really – initiating the move for MTRCB to cover even streaming services will have its repercussions. It’s not going to be easy. She may need it like a bullet in her head.