HIGHLIGHTS & SIDELIGHTS: Sine Sandaan, a night of more than a hundred stars

On the night of September 12, 2019, the nation celebrated the centennial year of Philippine Cinema as filmmakers, moviestars, cineastes, and movie fans gathered under one roof to look back at the last 100 years since the first full-length Filipino film—Dalagang Bukid by Jose Nepumuceno—was shown on the same date in the year 1919.

That night, the event’s venue, the New Frontier Theater  in Cubao, Quezon City (once hailed as the biggest theater in Asia), was transformed into an Art Deco edifice to set as a reminder of the Golden Age pf Philippine Cinema. There, more than a thousand people working in and for the film industry, walked the red carpet as equals.

Later on, the guests were treated to a musical extravaganza—directed by Ice Seguerra—inside the theater. In between huge production numbers, 300 “luminaries and icons of Philippine cinema”—from grip handlers to international awardees—were given recognition for their contribution to the local film industry. The guests were also given a rare glimpse, through an audio-visual presentation, into the life of the Father of Philippine Cinema, Jose Nepomuceno, through the eyes of his son Luis Nepomuceno.

The event, dubbed as Sine Sandaan: Celebrating the Luminaries of Philippine Cinema, was spearheaded by the Film Development Council of the Philippines led by its chairperson Liza Diño-Esguerra. It just served as the kick-off party for the centennial celebration, which will culminate in September 11, 2020.

It was a nostalgic night as well a as hopeful one for the local film industry.

And by the sheer size of attendees and the obvious giant effort in mounting it, the Sine Sandaan was a huge success. 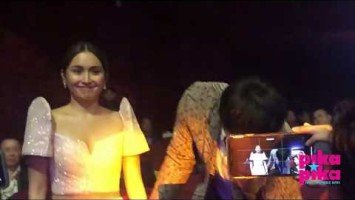 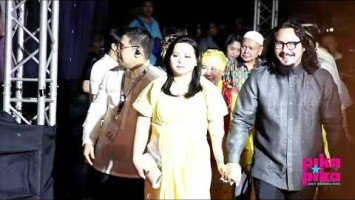