Showbiz writer-turned-comedian-turned-talent manager Ogie Diaz is now a father to a debutante as his eldest, Erin, turned 18 last August 15.

The father of five girls threw a belated debut party for his panganay. It was held last August 31, 2019, at the Luxent Hotel in Quezon City.

Erin, who chose the “Arabian Princess Theme” was indeed every inch a princess that night in her two intricately-embellished ball gowns, created by designer Edward Teng.

Dubbed Princess Erin that night, the debutante first came out in her fuchsia-pink gown, then changed into her royal blue ensemble during the second-half of the program.

The comic dad didn’t mind. It’s true, after all.

Ogie moved heaven and earth just to make his daughter’s dream debut happen. And he has the following people to thank for:
—Loi Villarama for styling Erin
—Mike Ruiz for styling the venue
—Charisse Tinio of Nice Print Photography for the pre-debut shoot and debut coverage
—Edward Teng for Erin’s gowns and the whole family’s garbs.

But Erin’s special guests that night were her fairy god sisters Vice Ganda and Liza Soberano, who are both her dad’s talents.

Vice, who saw Erin grew up, said he only wishes for Erin to uphold all the values that her Daddy Ogie has imparted with her through the years.

We wish that, too! 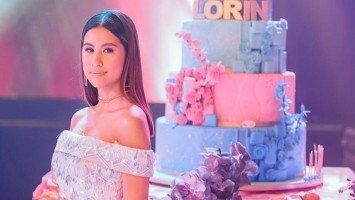 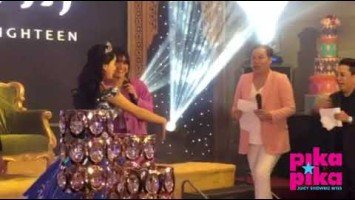 Pika's Pick: Jaya’s first born Sabriya just turned 14 and her mom could not...