These celebrity kids’ Halloween costumes will make you say “aww” 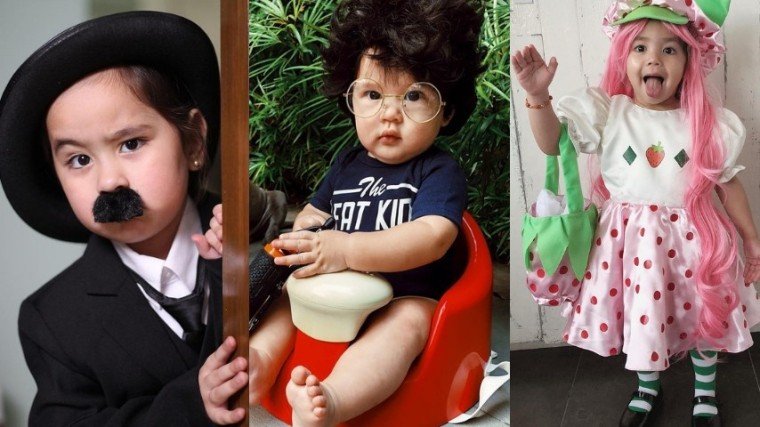 It may be the season of horror movies and spooky parties, but there’s no doubt that Halloween is a great holiday for kids. Think trick-or-treating and costumes—cute, clever, and creative costumes that let them live out their biggest dreams. Whether they’re dressed up as a superhero, princess, or even a YouTube content creator, these seven celebrity kids’ Halloween get-ups are sure to melt your heart. Check them out below:

For his first-ever Halloween, Baby Baltie—Isabelle Daza’s son—was dressed up as one of his mom’s good friends, Erwan Heussaff. Baltie’s costume came complete with “perfectly coiffed hair” and a shirt with the words “The Fat Kid Inside”—the title of Erwan’s blog.

Social media darling Scarlet Snow Belo charmed netizens this week with not just one but two costumes—a Monarch butterfly and a mini Charlie Chaplin. Cute as the butterfly outfit may be, we’d have to give this one to Charlie Chaplin. The small moustache looks so adorable on Scarlet’s face!

Lilly Feather, the daughter of showbiz couple Isabel Oli and John Prats—dressed up as two cartoon characters this week! She went as Strawberry Shortcake and Princess Anna from Frozen. We’re excited for her to become an ate so she and her sibling can dress up together.

Another future ate on the list, Zia Dantes is a certified pro when it comes to costumes. She and her superstar parents pick a theme for their family Halloween costumes each year, but Zia can definitely pull off a look all on her own. Just look at her galactic princess look made by her mom Marian!

According to Andi Eigenmann, her daughter Ellie is a “fashionista kid [who] will not go for “this should do” or anything store bought.” That’s why the All Souls’ Night actress had to remember her sewing skills from HELE class to make a black cat costume for Ellie—who went on to model it perfectly.

This Halloween, Juday is ready to save the world… in shorts. The mom-of-three posed with her younger daughter, Luna, who channelled her inner Gal Gadot in a Wonder Woman costume. Go Luna go!

Iron Man… or Iron Mini? Zion, Sarah Lahbati and Richard Gutierrez’s first son, looked so cool in his Marvel costume.  He even got the hand poses to back it up!