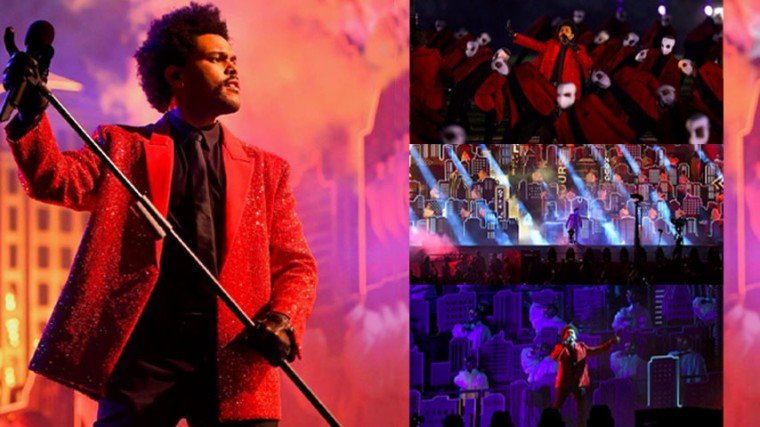 The Super Bowl LV Pepsi Halftime show is one of the most watched event on television during the annual championship game of the National Football League.

Canadian singer Abel Makkonen Tesfaye a.k.a. The Weeknd headlined the halftime show this year and surprised many NFL fans with his electrifying performance.

Breaking tradition, the stage setup were constucted in the stands next to the Raymond James Stadium lighted sign in Tampa, Florida.

The three-time Grammy winner started his performance in a convertible, to the opening strains of his 2016 hit “Starboy,” with city lights behind him and Pepsi logos all behind him. He incorporated lights, fog, and fireworks to amplify his performance.

He jumped in between his various albums, but starting with his back catalog, going from the “The Hills” to his 2015 number one hit “I Can’t Feel My Face,” which played as he walked through a mirrored hallway surrounded by bandaged lookalikes also wearing glittering red blazers, as fireworks erupted in the background.

With the backing of an orchestra, he did a rendition of “Earned It,” wearing a pair of black-and-white wingtips, he did a feint at moonwalking. The Weeknd said that he was influenced by Michael Jackson’s performance at the 1993 Super Bowl.

In addition to his more conventional hits, he played “House of Balloons” from his first EP released in 2011. It resolved into his recent hit “Blinding Lights” as he walked from the stands onto the middle of the field, surrounded by background dancers.

There was no stage set up. He did not have a surprise guest, likely to avoid close contact and keep it safer during the pandemic.

The setup was in part thanks to The Weeknd himself, who gave $7 million of his own money to ensure the performance was the vision he wanted.

The Weeknd said part of the reason they made the change was for safety.

"Due to COVID and for the safety of the players and the workers we kind of built the stage within the stadium and we're also using the field as well but we wanted to kind of do something that we've never done before.”

Due to the coronavirus pandemic, producing the halftime show was more complicated than ever before.

Last Friday, The New York Times reported on the lengths that the crew went to avoid transmitting COVID-19, from daily nasal swabs to frequent handwashing, which meant the bathroom trailers used three times as much water as they did at Super Bowl LV in Miami last year.

Despite the strained circumstances, The Weeknd gave a lavish performance.

“She’s just so glamorous and the show just makes me smile. And she has a great exit with the helicopter—it lands in the middle of the field, she grabs onto it and flies off into the clouds, it’s like… I wish I could have done that, I wish I’d thought of it. Although I don’t think I have enough money to do it!”

In the last 30 years, the Super Bowl halftime show has featured some of the hottest superstars and their jaw-dropping performances.