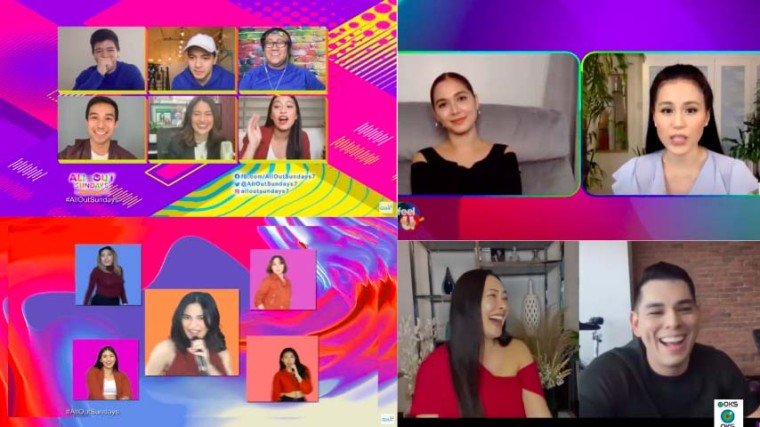 Photos: Videograbs from All-Out Sundays, Love Thy Chika, and I Feel U YouTube Channels

Work on television has started, but little by little and with a lot of adjustments. Toni Gonzaga conducts her new talk show I Feel U via zoom and that is a challenge for her because as one of the hosts of The Buzz before, she was used to face-to-face interviews. During the early episodes of I Feel U, she had difficulty moderating people via zoom because no one knew whose turn it was to speak. There was a lot of dead-air, which is a no-no on television.

I remember it well. It was 1997 on the set of ABS-CBN’s Showbiz Lingo. During a break, head writer Jillmer Dy gave me this very clear instruction: “We don’t have much time left. Dapat, by your second question, umiiyak na ang guest mo.”

Tears bring in the ratings. But that is never easy to do. The host has to size up the subject and study the body language. It is difficult to do that in this pandemic season because interviews are conducted via zoom. Gone is the face-to-face interaction between the host and guest.

With the subject visible only through a cold screen, it is difficult for the host to draw emotions from the interviewee. It can actually be done – why not? But it would really take so much from the host to be able to extract what the guest feels inside – unlike during the times when interviews where done in a more personal manner.

And then, there’s the matter of the internet connection. Both interviewer and interviewee constantly worry about that. There’s a chance either one would disappear from the screen.

I experienced that during the Anita Linda tribute hosted last June by award-winning filmmaker Adolf Alix. I was a participant and when it was my turn to talk about the late great actress, my image just faded away.

To think that I had to import a technical crew to be able to set up the requirements of a zoom interview – given the fact that I am a mechanical idiot. Yes, even with a professional team on standby, I still encountered technical problems during the Anita Linda zoom tribute.

Heck, I wasn’t even able to focus on what I wanted to contribute to the discussion because my thoughts were on the internet connection. Why, in the middle of a sentence at several instances, I would get panicky because these words appear on my laptop screen: “Your internet connection is unstable.” Every so often, I would wonder if I was still part of the group discussion,

My situation wasn’t really all that bad – all things considered. Rosanna Roces who did several movies with Anita Linda (Presa, Mater Dolorosa, etc.) had so much to share about her experiences with the actress. Too bad, we only heard Rosanna’s audio. By the time her face popped up on screen, it was bye-bye time.

My worries didn’t end there. After the zoom tribute, I had to drive the technical crew home because there was no public transportation available that time. And, yes, there was an 8 p.m. curfew. Thank heavens – we all live near each other in Quezon City. But I don’t recall ever going that fast behind the wheel since the time I learned to drive.

Work on television has started, but little by little and with a lot of adjustments. Toni Gonzaga conducts her new talk show I Feel U via zoom and that is a challenge for her because as one of the hosts of The Buzz before, she was used to face-to-face interviews. During the early episodes of I Feel U, she had difficulty moderating people via zoom because no one knew whose turn it was to speak. There was a lot of dead-air, which is a no-no on television.

To solve this problem, she now handles guests one at a time. In a recent episode where the topic was about celebrity breadwinners, she invited Maja Salvador, Bayani Agbayani, and Maymay Entrata who all obliged via zoom. For a more orderly discussion, she talked to them individually. Such a pity because the fun of a panel discussion was no longer there.

I can imagine what a riot that could have been – given Bayani Agbayani’s humor. Even Toni felt shackled and you know she really wanted to reach out to her guests to feel their warmth. But under the present circumstances, she did the best she could.

Even the atmosphere in the show of Raffy Tulfo changed – no thanks to the pandemic. These days, he simply talks to complainants either via zoom or phone patch. It’s not the same. Without the warring parties in the studio, the tension is gone.

Sorry to those who want to see blood spilled on the screen. That will no longer happen under the present setup. In a way, this is one of the few positive results of COVID-19 to humanity. That should teach us not to be bloodthirsty anymore. But what could Jerry Springer have done if he still had a show this time?

All-Out Sundays, unfortunately, is not as fun to watch – compared to the pre-COVID-19 days. The cast members are made to shoot their singing and dancing at home – with their individual videos edited into a cohesive whole. All that is dizzying to watch.

A more difficult undertaking during this worldwide health crisis is mounting dramas. Magpakailanman recently started airing new episodes. A couple of Saturdays ago, the show featured the life story of internet dance sensation DJ Loonyo – as portrayed by Jak Roberto.

For this episode, the drama anthology’s cast and crew were able to do outdoor scenes. But the people you see on the screen are limited. It was like watching a biblical presentation – the Creation of Adam and Eve in this instance... when there were only two people in the world.

There was a scene, for example, where Jak Roberto tells his mother (as portrayed by Lovely Rivero) to visit the ongoing construction of a house he built for the family. There was no one else there in the unfinished house - no construction workers hammering and pounding away which should have been the case. Lovely was by her lonesome self and she looked like a crazed one-woman akyat-bahay band out to rob the construction site.

I guess while the pandemic is on full swing, writers of dramas have to learn how to create orphaned characters and loners so that they don’t have to interact with so many other people. But I hope they don’t reach a point where they have to regularly use mannequins in lieu of real people.

In one crucial scene in that Magpakailanman episode, Jak Roberto is shown having a breakdown while clutching his blanket-covered dead child. Jak is a very fine young actor and he was brilliant in that part of the story. Surely, he must have moved not a few viewers to tears. The tears, however, surely turned to laughter when toward the end, it was accidentally revealed that he was – all along – grieving over a pillow.

That pillow just slipped from under his clutches and there was no intention to show it. Should they have re-shot it? That would have been too taxing for Jak Roberto – or any other actor for that matter.

In these pandemic times, viewers are more tolerant and forgiving over minor lapses. We’re just glad and appreciative of the fact that the production people of Magpakailanman were responsible in following health protocols.

Soon, we’ll be able to adjust to the new normal in the movies and on television. No, it’s not as fun. But we have no choice but to embrace a new style of entertainment brought about by the pandemic.