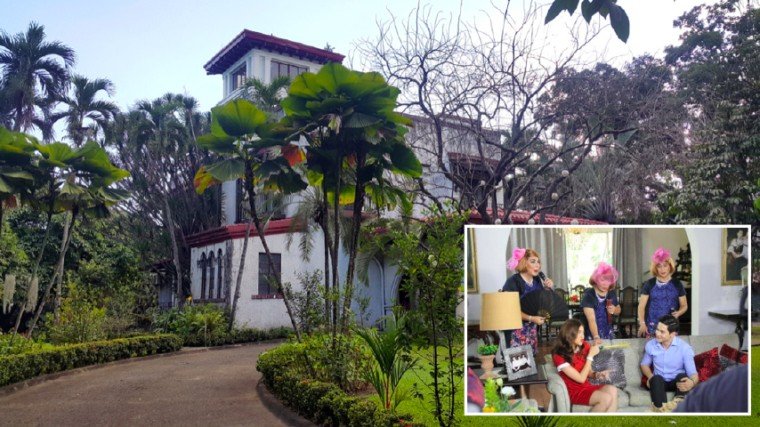 During the early phase of the AlDub craze in 2015, the Vera-Perez ancestral home inside the Sampaguita compound was used as the house of Lola Nidora (Wally Bayola) and sisters (Jose Manalo and Paolo Ballesteros). Unfortunately, those Eat Bulaga! scenes were always aired live and there was constantly a problem with the signal in the Vera-Perez home. When the production crew looked for an alternative venue, it didn’t come as a surprise that they moved to the mansion of the De Leons, the owners of LVN Pictures, which produced the likes of iconic stars Nida Blanca and Charito Solis. It is located at the corner of 9th St. and Broadway in New Manila. The property is so huge, its back part stretches all the way to 8th St.

Sampaguita Pictures compound for sale. That was what I reported in The Butcher last week.

This is really sad news, especially for nostalgia advocates who have to say goodbye to an era that had a long glorious past.

The Sampaguita compound in Quezon City was set up in 1937 by the landed Vera family of Bicol. They were the original showbiz royalty in Philippine movies.

What served as their palace is what is now known as the Vera-Perez Gardens that had been turned into an events place. Thankfully, that part of the property is not for sale. The ancestral home stays with the family.

The original owners of that huge property were Senator Jose Vera and his wife, Dolores Honrado. When they lived in that place, it was a time when there was still a great social divide. The masters were addressed as senoritos y senoras, while the servants were called muchachos y muchachas.

Meals were formal affairs in the home of the Veras. They even dressed up for it, in fact. Every dish was also served one at a time – in silver chafing dishes with dome covers. If the cover had even a little smudge on it – fingerprints, mostly – that was sent back to the kitchen to be wiped off.

During the Second World War, the family was ordered out of their home around 1944 after it was turned into a Japanese headquarters and garrison. Mercifully, it wasn’t among the houses destroyed during the Battle for Manila since it was far from the south of the metropolis where the actual carnage took place.

After repairs were done to the residence, Senator Vera and wife continued to live in that home with the new addition to the family: son-in-law Jose Perez, a physician who lost interest in medicine after seeing his father die on the operating table in the hands of other doctors.

Dr. Perez had actually married the Vera heiress Azucena during the early days of the war. The wedding had to take place ahead of the original schedule – before total chaos could engulf the city.

Like the Veras, Dr. Perez’ family also owned tracts of land (in Bulacan). But he was part of another generation that had more democratized ways.

While he and his children dutifully sat down to the stiff formal meals with the Veras, he would later gather the kids in the kitchen to eat tuyo (dried fish) with bare hands. This proved to be very useful to daughter Marichu during all those years she was campaigning for her husband, Ernesto Maceda, in his various bids for a senate seat. She learned to converse with people in high places, but at the same time was comfortable sharing humble meals with lowly barrio folk.

Growing up in the Vera-Perez home was not easy. When it was constructed, indoor plumbing was still a complicated affair. Not all the rooms in that huge house therefore had bathrooms.

Since the house was used for movie shoots, everyone had to wake up early to be able to do their bathroom chores. And when they stepped out of their rooms, they had to be all dressed up complete with stockings since there would be people even in the second floor shooting a scene or two for the latest Sampaguita movie project.

Some of the events that took place outside of camera range, however, turned out to be far more exciting compared to the scenes being shot for the movies. Action queen Alicia Vergel, for example, turned out to be a feisty action star even in real life. During their perennial quarrels, she would chase with a machete husband Cesar Ramirez (Ace Vergel’s dad) all over the Vera-Perez gardens.

There was also one of the studio’s top dramatic actresses who had more drama in real life than in her box-office tearjerkers. Her husband (also a Sampaguita actor) would often beat her up at home and the Vera-Perez residence would be her sanctuary.

Today, only Lander Vera-Perez lives in that house. The dramatic scenes that take place there are mostly in tele-seryes since it is often used as setting in a lot of GMA soaps.

During the early phase of the AlDub craze in 2015, it was used as the house of Lola Nidora (Wally Bayola) and sisters (Jose Manalo and Paolo Ballesteros). Unfortunately, those Eat Bulaga! scenes were always aired live and there was constantly a problem with the signal in the Vera-Perez home.

When the production crew looked for an alternative venue, it didn’t come as a surprise that they moved to the mansion of the De Leons, the owners of LVN Pictures, which produced the likes of iconic stars Nida Blanca and Charito Solis.

It is located at the corner of 9th St. and Broadway in New Manila. The property is so huge, its back part stretches all the way to 8th St.

This white house is surely familiar to anyone who follows local entertainment. Motorists passing through New Manila point out to it as the house of Lola Nidora. Vic Sotto also had a paint commercial a couple of years ago that used this house as the setting.

Designed by National Artist for Architecture Pablo Antonio, the construction of this house began in the early 1930s by the De Leon couple Jose and Narcisa or Doña Sisang. By the time the house was finished in 1935, Jose had died. Prior to that, the couple lived in San Miguel, Bulacan.

In 1938 – at the age of 61- Dona Sisang formed LVN with the Villoncos and the Navoas. Yes, LVN stands for De Leon, Villonco and Navoa. Eventually, she bought out the shares of her business partners and became the sole owner of one of the biggest studios of that era.

Since she was among the closest friends of Manuel Quezon and had a lot of influential friends, she was obliged to throw huge parties in that house on Broadway Street. The place was said to have been spectacular when all lit up at night.

I had the chance to dine on several occasions in that house, but this was decades after Doña Sisang had died. It was her son, Atty. Manuel de Leon (Mike de Leon’s father) who was already the master of the house by that time. He was Tito Manny to us.

Friends who knew I had access to that residence would ask me if coffee was poured from a silver coffeepot – like they did in the old movies depicting the lifestyles of the rich. No, they didn’t – maybe not anymore.

Atty. De Leon was a very practical person. He served hot water for coffee straight out of an air pot. And his coffee was instant – from the bottle. Had 3-in-1 coffee in sachets been available then, that was what we would have been served. But that was still okay by us. At least, he still served us good party dishes.

The last time I was there was in 1999. Atty. De Leon was already wheelchair-bound then. But he still insisted on throwing a luncheon for Rosa Rosal after she received a Ramon Magsaysay award for her humanitarian services. It was already a catered affair. In fact, we ate off the usual white chipped plates provided by the catering service and not on fine china.

The art of entertaining was already gone by then. A couple of years later, Atty. De Leon was dead. Some 15 years ago, I heard that the entire property was being sold for a hundred million pesos. Surely, that’s no longer the going rate there now since a townhouse in New Manila can command up to P90-M these days.

There was also talk that it was Herbert Bautista who bought the place – not at one hundred million pesos, but for a lot more. He was still mayor of Quezon City then. That turned out to be false.

If I got my information correctly, it was bought by the Ongsiaco family. The Ongsiacos are not strangers to New Manila. Villa Caridad, which still stands along Broadway to this day, was named after the Ongsiaco-Gallego matriarch.

So far, I haven’t heard of any news about “the house of Lola Nidora” being put up in the market again. Like the Vera-Perez mansion, it is being rented out to production companies for shoots on a daily basis. I don’t have the exact figures, but I think the rental fee ranges from P80-100,000 a day.

Nostalgia lovers can only hope the owners of those mansions don’t demolish those structures anytime soon to give way to this necessary evil called progress.