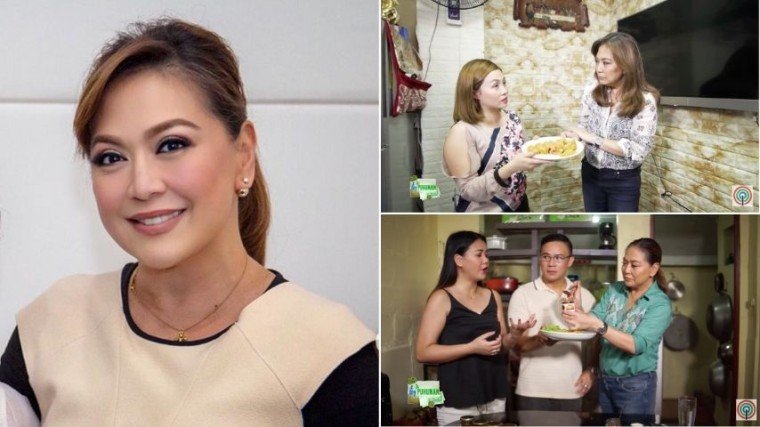 Karen Davila here with some of her featured rags-to-riches entrepreneurs namely Angel Maniti of Anghelita’s Hamonado (top photo) and Gelo Abaca and his wife (bottom) who sells Gelo’s Bacon Jam.

I don’t understand why there are netizens who hate Karen Davila. Maybe it’s because she is one of the more visible faces in news and current affairs. She anchors Bandila for ABS-CBN nightly and Headstart for sister station ANC. There’s also the weekly My Puhunan. With all that TV exposure, she really is an easy target for online bashers.

If you ask me, it’s really just her voice that bothers me. There’s a distinct hoarseness to it that can be assaulting to the ears. Her impersonator Kalad Karen actually sounds more pleasant.

But to her credit, even if her voice sounds as if there is an ongoing DPWH Pasig River dredging project in her throat, her every spoken word can easily be understood by the viewing public. Also, after more than two decades, we’ve already gotten used to her speaking voice. We have no choice but to accept Karen as part of local TV landscape.

And contrary to what her detractors say about her, I think Karen asks very sensible questions during her interviews in Headstart. In Bandila, it’s really just routine for her to read the late night news and there really isn’t much challenge there. But I have to say she and Julius Babao still run a tight ship even if Ces Drilon is no longer in that news program.

Of her shows, My Puhunan is my favorite. Aired early morning of Saturday and with replays every Tuesday night after Bandila, My Puhunan features the success stories of once humble individuals who were able to realize their dreams in the field of entrepreneurship. No, these are not the Ramon Angs, the Lucio Tans and the Gokongweis or MVPs of this country.

What the show features instead are mostly real-life tales of how once struggling businessmen were able to successfully re-formulate milk tea, shakes and other fast food items.

And then there are the delicious stories of kitchen experts who were able to reinvent the galantina, lechon and even chicken skin.

My favorite is about this industrious woman named Angel Maniti who is the brains behind Anghelita’s jamonado. Angel was raised by a single mom who used to sell produce in the public market. Since there was no one to watch her at home, she stayed mostly in the palengke – bathing there, doing her assignments there and even slept there on many instances. She grew up without any bitterness in her heart, especially now that she has her own family.

Although she finished college and was able to work as a casino manager, she decided to eventually focus her talent in the kitchen – making jamonado. But how different is her jamonado from other cured meats in the market? Unlike most jamonado that uses pineapple, hers is basically cheese-based. It must be delicious because she gets a lot of orders, especially during the holiday season.

A recent My Puhunan feature is turning out to be another personal favorite. This is the story of Gelo Abaca, who suffered from the cruelties of his stepfather as a child. Although he took up physical therapy, his first job was at a call center.

Since he had always wanted to be a businessman, he resigned from his job to join the food park craze. He ended up selling bacon jam instead and is very successful at it.

The minute I realized that there is such a product called bacon jam now being sold in the market, I harked back to the old days while traveling to Philadelphia. In a food fair that time, I saw a bottle with the label cherry butter. In my head, I imagined it to be cherry marmalade infused with rich butter – like Anchor or Dairy Creme. I forked out $5 for a tiny bottle only to discover later that it is just plain cherry jam!

And so, what now is bacon jam? As demonstrated before Karen Davila, it is bacon bits in a bottle, but has the consistency of jam. It’s not for those with sweet tooth because it’s not a dessert. I can imagine it to be salty – like any other bacon. (It also has a spicy version, by the way.)

The way to eat it is to pour it over pasta. Or maybe even rice – as shown by Gelo’s family while at the dinner table (I can only hope and pray they don’t eat that at every meal).

Gelo’s initial investment for his bacon jam business was P10,000. Today, he is able to sell anywhere between 200 to 300 bottles a week.

Gelo’s story is actually very inspiring. What I like most about My Puhunan episodes is the fact that in one segment alone, the program is able to show rags-to-riches stories, cooking demos, taste tests and, most important of all, tips on how to start a business.

Unfortunately, there is also a downside to My Puhunan. In the same episode, there was also a segment on how to make money by selling a particular skin care product. Now, I am still being sponsored by Flawless and the Belo Medical Group. But when I saw this lady with porcelain-like skin swearing by this cream she is marketing, I was ready to jump ship and abandon Dr. Vicki Belo, daughter Cristalle and even Scarlet Snow. Wow, that woman has fabulous skin.

And then came the turn of another distributor of the same product to speak. She said that she had a lot of pimples before and it was this beauty product that eradicated all her skin problems. According to her, this is the reason why she now sells the said skin care brand.

I believed what she said – until there was another shot of her, tighter this time,   and I saw how her chin is riddled with acne. Believe me, I commiserate with her because I, too, develop pimples every time I use the wrong toothpaste or shampoo.

But to go on national television swearing by a product that obviously doesn’t work on her is a disservice to Filipino consumers. And so it’s hello to Flawless and Dr. Belo again. Sorry for entertaining thoughts about leaving you.

When that My Puhunan episode was about to end, I almost died when I discovered that the entire segment about how to start a small business by selling the skin care product mentioned above was actually being sponsored by that brand.

Of course, My Puhunan is not the first show to have sponsored segments. But most programs that allow products to buy into the show belong to the entertainment category (talk shows, variety programs, etc.).

The way I remember it, ABS-CBN News and Current Affairs was very strict about entertaining product endorsements within its programs. In fact, Mel Tiangco had to leave TV Patrol in the mid-1990s because she was not allowed by her former network to endorse Tide detergent.

By allowing what is termed on TV as “portion buys,” My Puhunan earns extra income for the program. But at what cost?

Eat Bulaga, Showtime  and Wowowin can advertise all the consumer products available in the market as part of the program because these shows fall under the category “entertainment.” You may or may not believe what Joey de Leon or Vice Ganda tell you – that’s your choice.

But news and current affairs programs – like My Puhunan – are sacred. Everything you see there is supposed to be the gospel truth.

As host of My Puhunan, Karen may not have anything to do with that portion buy. But that will reflect badly on her.

Broadcasters are not necessarily patronized by the viewing public because of their looks – otherwise some GMA news and public affairs talents would not even be on TV today.

Karen Davila is a very attractive woman. But it is not her prettiness that brought her to what she is today on local television. Like any other journalist, she banks on her credibility. And more than anything else, she should take care not to lose that.

Playing around the title of one of her shows, that is actually Her Puhunan – and that she should remember.

The Butcher | How Jolina saved money for MMK?