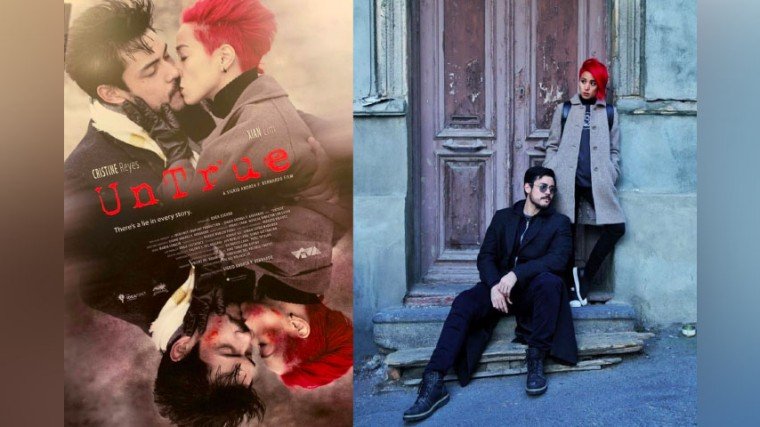 For all of the scenic spots all around Tbilisi, Georgia, the director refuses to turn her film into a romantic movie. The truth is, it must have been tempting for Bernardo to make a love story out of a fraction of the material because all the elements are there: Two good-looking characters, plus panoramic settings. But no, she sticks to what the film is all about – psychological drama peppered with a lot of violence.

Untrue will be shown early next year yet, but it already received the honor as the opening film of the QCinema last October. That was the first time a Filipino picture was given such distinction in this festival and this was in line with the 100th anniversary celebration of Philippine cinema.

Starring Cristine Reyes and Xian Lim, this movie has slight similarities to Nuuk, which was exhibited only recently and featured Aga Muhlach and Alice Dixson.

The plot also has some elements that were used in another Cristine Reyes starrer, The Trophy Wife. Released in 2015 and co-starring Heart Evangelista and Derek Ramsay, the story of The Trophy Wife is also about revenge – the plan of which was hatched in Manila, but partly executed abroad (San Francisco, California in this case).

Untrue also draws inspiration from Akira Kurosawa’s Rashomon, which shows varying versions of the truth. Rashomon also influenced the tandem of Laurice Guillen and Ricardo Lee to come up with Salome, which won a lion’s share of the Gawad Urian trophies in 1981.

Six years later, it was the turn of Chito Roño to do his own Rashomon, although much simpler in scope. Roño’s film was Itanong Mo sa Buwan and that, too, swept most of the major awards in the 1988 Urian Awards.

Untrue director Sigrid Andrea Bernardo, however, ingeniously creates her own Rashomon by turning the story into a He says/She says kind of game – although in a dark, violent way.

For all of the elements and inspirations borrowed from other movies, Untrue still comes out unique. It is still its own film.

Ninety-eight per cent of Untrue is set in Georgia – no, not in the United States, but in Europe. The country Georgia, which is at the crossroad of the continents of Europe and Asia, was once part of the Union of Soviet Socialist Republics (USSR) until the breakaway.

Georgia is now a country that boasts of picturesque landscapes: the beaches of the Black Sea and the villages of the Caucasus Mountain. Its capital is Tbilisi and this becomes the main setting of Untrue.

A lot of local films had used European cities as setting – from Barcelona to Milan, but this is the first time that a Filipino movie was shot in the Georgian capital of Tbilisi, which is not very familiar among Pinoys.

For all of the scenic spots all around Georgia, the director refuses to turn her film into a romantic movie. The truth is, it must have been tempting for Bernardo to make a love story out of a fraction of the material because all the elements are there: Two good-looking characters, plus panoramic settings. But no, she sticks to what the film is all about – psychological drama peppered with a lot of violence.

In fact, Untrue opens with a badly battered and bruised Cristine reporting to the police how her husband, Xian, had manhandled her.  From there, it’s anyone’s guess how the film will unfold and this is the strength of Untrue as a film: It’s layer after layer of suspense and guessing game.

The story-telling is so complicated that aside from the he said/she said elements, it also goes into flashbacks here in the Philippines. A single trip to the bathroom may cause you to lose your grip on the story. One tip I will give to anyone who will watch Untrue: Either you go easy on liquid intake prior to the screening or bring a companion who will fill you in on what you missed out while you pass water in the cinema’s comfort room.

Untrue also comes off as some modern film noir – with everything dark: from the mood to the photography. I say modern because the director takes advantage of new filming techniques and equipment that were not available when film noirs came into fashion around 1944 in Hollywood movies.

The director’s decision to darken the shots is a wise one: It truly complemented the film’s mood and thus literally leaving the viewer in the dark as to the next turn of the story.

For all the darkness on the big screen, however, Untrue is still visually appealing. The mood it sets, in fact, reminds us of Interview With the Vampire. Yes, for I while there, I thought in the beginning that the movie will turn horror.

And although it introduces us to the customs and traditions of Georgia and points out the country’s landmarks, the film doesn’t sell it as a tourists’ destination.

One quarrel I have with the story is the fact that Cristine had to travel all the way to Europe and relocate there just to carry out a vendetta when she could have settled issues here in the Philippines through the proper judicial system. I can’t tell you the case she could have filed so as not to give the plot away, but I swear it is something that would stand in court.

But in spite of that kink in the story, Untrue is still a very exciting film to watch. Its biggest selling point are the performances of Cristine Reyes and Xian Lim. Those are difficult roles they play here. For one, they go through personality changes – much simpler though and less complex than those required of Joanne Woodward in Three Faces of Eve and Sally Field (Sybil), who both won awards for playing characters with multiple personalities. But still, those are difficult parts to play on the big screen.

Both actors put different layers in their respective performances. Between the two, it is Xian who is supposed to be more accomplished – having won an Urian nomination for best actor in Two Funerals almost a decade ago. Sadly, his acting style was ruined by having appeared in so many soap operas in ABS-CBN. But he redeems himself here in Untrue where he delivers a very inspired performance from start to finish.

The way he and Cristine flesh out their characters makes it easier for the viewers to comprehend the very convoluted plot of this movie that has three versions: What she says, what he says and the truth.