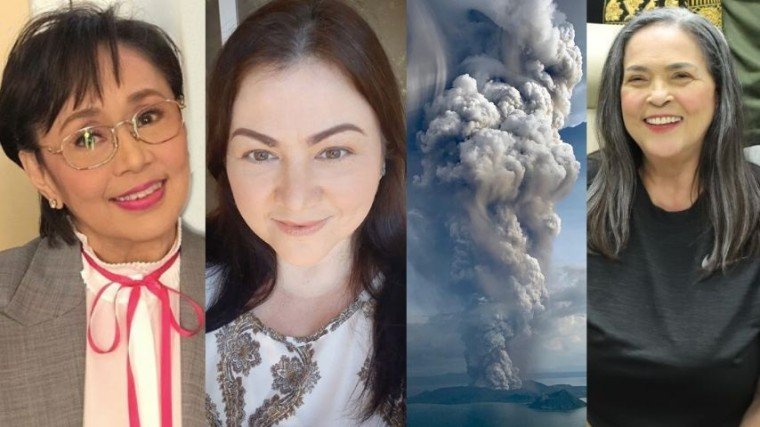 Man has no power over volcanoes, especially over an active one like Taal. With the eruption still hogging the headlines, the names of the showbiz people I associate with Taal keep gnawing in my head.

I’ve always been fascinated with volcanoes even as a child. In fact, when I was interviewed by Martin Nievera in his show Martin After Dark way back in 1995, he almost tumbled over when I told him that my childhood ambition was to become a volcanologist.

Of course, that didn’t happen because I eventually joined show business. But since my fascination for volcanoes never left me, somehow I am able to find a
connection between volcanoes and the world of entertainment.

And now that Taal is in the news, names of movie personalities who remind me of the volcano pop in and out of my head every time I check the latest on what is often called “the world’s deadliest volcano.” Here are just some of the people I associate with Taal:

MARIA KALAW KATIGBAK
Before there was MMK (acronym for the iconic drama anthology Maalaala  Mo Kaya), there was MKK – the initials of Maria Kalaw Katigbak.

Today’s generation most likely do not know her. But, boy, like Taal, she was a force to reckon with when she was the censors chief from 1981 to 1985.

But why do I associate her with Taal? First of all, her father, the esteemed Teodoro M. Kalaw was from Batangas, which is where Taal is located. To be more specific, T.M. Kalaw was from Lipa.

Lipa is the city where Vilma Santos first tasted her political victory (as mayor). The present site of Lipa is already its fourth location. The first three Lipa towns got submerged in the past – no thanks to Taal.

But going back to MKK. She was actually born on February 14, 1911 (Wikipedia entries about her are mostly wrong) – exactly 15 days after the deadliest eruption of Taal. This was an eruption that killed 1,300 people.

Although she was born at the Philippine General Hospital - away from Batangas - her birth will always be associated with the Taal eruption. During her entry into this world, that volcanic catastrophe was still on everyone’s lips.

And it didn’t help that Manila was still in shock that time over the eruption, especially since the tremors coming all the way from Taal were felt in the capital
city.

Even if Manila is 80 kilometers away from the volcano, Manilans still feared Taal – maybe they believed the theory that the Tagaytay ridge is actually part of
the mouth of the volcano and that the foot of Taal is Metro Manila.

Exactly 70 years later, Maria Kalaw Katigbak herself became much feared - by the movie industry, actually. When she was appointed by Ferdinand Marcos to head the then Board of Review for Motion Pictures and Television (today’s MTRCB), movie people initially welcomed the news. MKK, after all, was an accomplished woman – with pedigree.

Her father was the first head of the board of censors. Wasn’t it fitting that she also became one?

In time, MKK also became an educator, writer, head of the Girl Scouts and eventually senator of the Republic of the Philippines.

But for all those achievements, she became very unpopular with the members of the film industry who even took to the streets to push for her ouster.

She was very strict at enforcing censorship laws and, like Taal, was dreaded by producers, directors and film distributors.

STARS ‘66
Sampaguita Pictures was supposed to launch them in October 1965. Yes, they were supposed to be called Stars ‘65. But Taal erupted in September of that year and so the grand launch had to be canceled.

The launch which was called An Evening to Remember finally happened the following year – in 1966 and so they had since been known as the Stars ‘66: Shirley Moreno, Blanca Gomez (the sister of Daisy Romualdez), Rosemarie Sonora (the mother of Sheryl Cruz), Loretta Marquez, Gina Pareño, Dindo Fernando, Bert Leroy Jr, Edgar Salcedo and Ramil and Pepito Rodriguez.

Of those 10 members of Stars ‘66, two became award-winning performers: Dindo Fernando and Gina Pareño. Unfortunately, Dindo died in 1987. But Gina Pareno is still very much around and until a few years ago, was still collecting acting accolades mostly for her indie films.

ROSANNA ROCES
Sometime in 2002 – when Rosanna Roces was still at the very peak of her career – she became a celebrity contestant in the Philippine edition of Who Wants to Be a Millionaire? That day she taped her episode, I was put on standby as her “Call-a-Friend” buddy.

While she taped in a studio, which I think was in Marikina, I stayed at home and paced the floor like a caged jaguar – waiting for that dreaded call. Now, this was the time before google and most information could be found only in books.

To this day, I have to admit that I’ve only read a speck of what had been written in books all over the world. I worried about the question they’d ask her. Would I be able to answer that on her behalf?

The call never came. Somehow, she never reached that part where she was allowed to call a friend. The question – as I was to find out later – was all about Taal Volcano. Sayang! The topic, of course, is familiar to me and I could have given it a shot.

VILMA SANTOS
Around 2011, Batangas vice governor Marc Leviste tried to spearhead a tourism campaign for the province and the first thing on his list was to put a sign that says Batangas on the slope of one of the craters of Taal Volcano. It was an idea shamelessly copied from the Hollywood sign that is located in Griffith Park on Mount Lee in Los Angeles, California.

Although the idea came from Leviste, it was then Batangas governor Vilma Santos who took the brunt of it all. Yes, the idea received a lot of flak. Ever the
responsible leader, Vilma took the blame because “it was my command responsibility.”

Memes still weren’t in fashion back then, but the social media world was flooded nevertheless with images of Vilma – costumed as Darna – flying around Volcano Island in that part of Batangas.

Thankfully, that idea was never carried out. But what if it pushed through? Logically, the sign would have been installed along the slopes of the dormant
Binintiang Malaki – the prominent crater that is seen from Tagaytay.

Even if that is not the one erupting at the moment, the sign would now surely be covered in ash (a waste of taxpayers’ money). A worse case scenario would be for that sign to topple over – what with all the tremors there – and kill whoever or whatever is on its path. It was a stupid idea from the beginning.

Thirty years ago, there were also plans to put a theme park like Disneyland in Tagaytay. Had it been built there, I shudder at the thought of what could have happened during Taal’s first eruption last Sunday. Being a weekend, I can imagine the place to be full. There could have been a stampede at the sighting of the pillar of smoke emanating from the volcano’s main crater.

Man has no power over volcanoes, especially over an active one like Taal. With the eruption still hogging the headlines, the names of the showbiz people I associate with Taal keep gnawing in my head. Maria Kalaw Katigbak has passed on – the same with some members of Stars ‘66. Rosanna Roces seems to have mellowed and Vilma Santos has slowed down in her showbiz career. As to her longevity as a politician, maybe even she doesn’t know.

What is certain is that Taal Volcano will continue erupting and that we have no choice but to co-exist with this deadly force of nature.

The Butcher | What ails Culion

The Butcher | The real state of Mindanao—according to Brillante Mendoza

The Butcher | The Mall, The Merrier: This movie will make your Christmas merrier