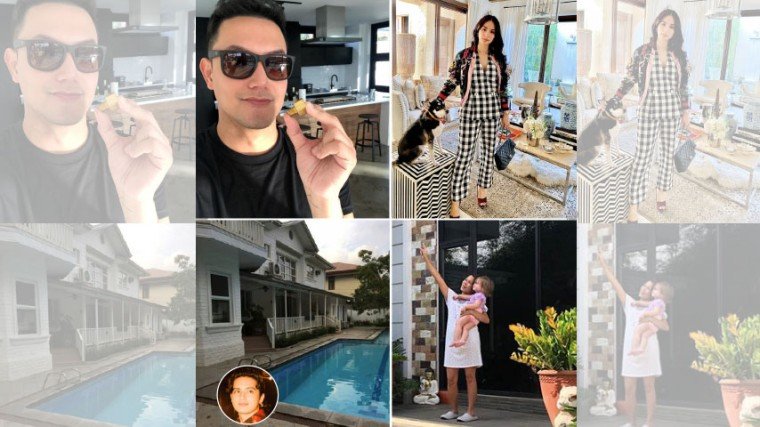 Yes, with affordable housing developments all over, a celebrity has to be extremely dumb, totally careless with money or a drug addict to still end up on the streets after a profitable stint in show business.

Celebrities today try to be more accessible to their fans and one way to do this is through their respective vlogs. This certainly was never the practice among movie stars of old – during the post-war years in particular.

In the 1950s, the giant movie company Sampaguita Pictures started molding its major contract players in Hollywood tradition. Movie stars had to be unreachable and separated from the rest of humanity – to be admired only on the silver screen.

To do this, they were set up in homes far from the reach of movie fans, who belonged mostly to the CD market or the “bakya” crowd, as they were later called in the 1960s.

When Gloria Romero was new in the movies, for instance, she first lived in a small apartment at the back of Famous laundry in Sta. Mesa. With her popularity growing, she later rented a bigger place in Kamuning.

As a bona fide movie queen, however, the studio owners felt she belonged to a better neighborhood and got her a house with a nice garden in 7th St. in fashionable New Manila. She lives there to this day.

Of course, that house didn’t come for free. The studio made her pay for that – but on easy payment terms.

In the case of Susan Roces, she initially lived a block away from the Sampaguita compound – in an apartment that is actually still there. Fortunately for Susan, her mother was blessed with a good sense for investment. Upon her mom’s encouragement, Susan bought a piece of property in the 1960s along Wilson in West Greenhills.

Greenhills – prior to its development by the Ortigas family – was called Barrio Mapuntod. Susan’s Wilson place was practically just the only house there because all around her was grassland.

The populated areas there were in the P. Guevara side because that was where the rich families of Ermita built their summer residences before World War II. Yes, it was the Tagaytay of Manilans that time – with the breeze coming from Manila Bay wafting all the way to San Juan (there is a street off P. Guevara, in fact, called Sea Breeze).

With the homes of the Ermitenses destroyed during the Battle for Manila, practically everyone turned their San Juan vacation places into their permanent residences after liberation. No one returned to Ermita anymore because that had been flattened to the ground.

Nobody dared venture beyond P. Guevara, however - save for the likes of Susan Roces because Greenhills around that time was a land far away. The late talent manager Cornelia “Angge” Lee who started out as a Susan Roces fan once said that she showed her undying devotion to the movie queen by walking that long stretch of Wilson just to visit her screen idol.

Fans of the late Nida Blanca had an even tougher time: she built her permanent home in the more inaccessible White Plains – the lot of which she purchased at P45 per square meter in the 1960s.

White Plains was not a first class subdivision when it was developed back then by the Sarangaya family (the first wife of Antonio Leviste, Loren Legarda’s ex-husband, is a Sarangaya). It just so happened that prominent personalities started buying there. Among showbiz people, the others who invested in White Plains early on aside from Nida were Helen Gamboa, Eddie Gutierrez, and Caridad Sanchez.

This subdivision was still a popular neighborhood among movie folk until the time of Maricel Soriano and Snooky Serna who both had homes there – thanks to the help of Lily Monteverde.

After White Plains, celebrities later moved to the different phases of Valle Verde. Ricky Belmonte and Rosemarie Sonora were among the pioneers of this area, which was also developed by the Ortigases. Eventually, the late Helen Vela transferred there – followed by good friend Coney Reyes. Today, Tony Tuviera lives in Valle Verde IV with his wife.

Unfortunately for today’s crop of young stars, the prices of the properties in these gated enclaves may no longer be within their budget. The likes of James Reid and Daniel Padilla, for instance, may command a talent fee of anywhere between P5 to P6-M per product endorsement, but it is unlikely they’ll be able to afford a property in Greenhills today.

Lots in Greenhills now go for P250,000 per square meter. But you are not just buying one square meter. The cuts there, in fact, are huge – with some as big as 1,000 square meters or even bigger.

Susan Roces truly hit the jackpot with that Wilson property in Greenhills. She had since converted that into a commercial building – with the structure more popularly known in the area as Health Cube.

Of course, there’s no way stars today would be able to afford Forbes Park – unless they become another Manny Pacquiao. Or Gretchen Barretto perhaps. Forbes Park lots today are sold for P400,000 per square meter.

Dina Bonnevie was lucky because she peaked at a time when standard lots in snobbish Ayala Heights went for “only” P5-M. The exchange rate then was P26=$1.

These days, only the filthy rich businessmen and politicians could afford to buy there. Regine Velasquez also lives in Ayala Heights now, but surely she saved up for that through the years.

So where do the young stars build their homes today?

James Reid invested in Loyola Grand Villas, which isn’t exactly in the same league as White Plains or Greenhills. Toni Gonzaga, before she married Paul Soriano, built a house for her family also in Taytay, which had always been her hometown.

Comedienne Pokwang shares a home with her American husband Lee O’Brien in Antipolo. Paolo Ballesteros also lives in the capital city of Rizal – in a newly-built house.

There are also ABS-CBN talents who stay in posh villages like Green Meadows and Dasma, but from what I know, these stars are merely renting.

A few years back, Coco Martin built a magnificent home in Fairview. It’s not because he couldn’t afford to buy in the more exclusive subdivisions. He merely waxed sentimental by staying in the same community where he spent his childhood – yes, in Fairview.

The one problem with Fairview is that people don’t call it Far View just for a mere play of words. It truly is far. But with another MRT line headed toward its direction, there’s a chance for the prices of the properties there to finally gallop.

Siblings Sanya Lopez and Jak Roberto built their home even farther – in San Jose del Monte in Bulacan. Although both are very talented and popular GMA artists, the talent fees of newcomers in the field, sadly, are no longer as spectacular compared to about a decade or so ago. But combining their respective incomes, they were able to provide their parents with a home they can call their own.

Sanya and Jak therefore deserve a pat in the back because a property even in San Jose del Monte is still a wise investment. That will still appreciate in value regardless of its distance from the city.

For showbiz personalities who want to stay close to the two major networks, the ideal location for them is New Manila. In 2008 or perhaps even earlier, Katrina Halili purchased a townhouse there for P9-M – payable in five years.

Today, there are luxurious townhouses in New Manila that sell for P90-M. Lots there cost anywhere between P130-150,000 per square meter. Lucky for Heart Evangelista, she was able to invest there right before the prices in New Manila jacked up. She now lives in a nice white house with Chiz Escudero in 9th St.

TV-movie celebrities who want to stay within the city proper but couldn’t afford to buy house and lots in the metropolis live in condos. Young stars today – in a way – are still lucky because condo units are very affordable nowadays.

This wasn’t available to showbiz people from the previous generation, which was why some of them ended up as charity cases in Vicky Morales’ now-defunct program Wish Ko Lang. Wasn’t it Whitney Tyson who ended up squatting under the Nagtahan Bridge?

With rent-to-own condo units flooding the market, there’s no reason for celebrities to still be homeless.

Yes, with affordable housing developments all over, a celebrity has to be extremely dumb, totally careless with money or a drug addict to still end up on the streets after a profitable stint in show business.

The Butcher | What Biyahe ni Drew failed to show in Baguio