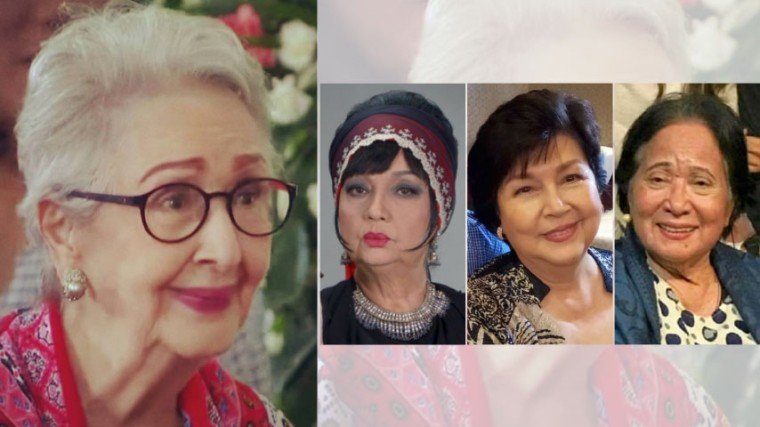 Even now that Metro Manila is under the more lax General Community Quarantine, the government still admonishes seniors to stay put at home.

The senior members of the local entertainment industry had been complying with this government directive so far.

Gloria Romero, in fact, had already been practicing home quarantine since late last year – after she had a violent vertigo attack. Work from home? She was already doing that even before the pandemic.

While recuperating, she actually worked from her home – with the staff and crew of her top-rating show Daig Kayo ng Lola Ko coming over to her house where her segments were taped.

Of course, work stopped during the lock-down and she is still currently doing quarantine in her New Manila house with daughter Maritess Gutierrez and grandson Christopher Balbin.

Lucky for her, even at age 87, she has no major health concerns aside from her vertigo. Both her blood sugar and blood pressure are okay. And except for Coke, coffee, chocolates and other food products that contain caffeine that may trigger her vertigo, she can consume anything – as in anything.

Not surprisingly, Gloria gained weight since she spent the lock-down with two people who cook very well, especially Maritess who is a chef. (Christopher is into the beer brewing business.)

When there is good meat available, there would be ossobuco on the table. Two weeks ago, Maritess also made fresh corned beef.

To keep her weight down, Gloria had lately been sticking mostly to fish and vegetables – with no rice. Oh, but she couldn’t say no to a delicious merienda of biko, which they also make in the house. Five times a week, she also walks all over the garden and does a few minutes of light weights – with 2-pound dumbbells.

These days of replays on TV, there is this perception that the most visible celebrities are newscasters given the fact that news is very important in our lives in this age of pandemic. Wrong! Gloria Romero is still the most visible among them because three of her shows are being replayed – on primetime at that: Daig Kayo ng Lola Ko and the back-to-back showing of Kambal Karibal and Meant to Be.

Gloria Romero’s tocaya, Gloria Sevilla, is also thriving well even in this pandemic season. All of Ms. Sevilla’s children are in California, save for Suzette Ranillo who keeps her company in her condo unit in Goldland along Eisenhower St. in Greenhills.

The shift to GCQ was a relief for her because it finally allowed the return of her helper to her condo after getting stranded in another end of the metropolis. During all that time they didn’t have help, mother and daughter were constantly arguing as to who would cook their meals. Suzette preferred to do the cooking herself because she found it easier to clean up after.

To maintain peace in the house, Suzette allowed her mother to do the mixing of the ingredients – to suit Gloria’s taste buds. This is crucial, especially when they have adobo since Gloria likes it done the Bisaya way.

Last week, Gloria returned to her job as an MTRCB member. But since she is already 85, she is allowed to stay home and perform her duties online.

Another octogenarian member of showbiz is Celia Rodriguez. She turned 81 only last June 2. Obviously, she was unable to have a big celebration since that is still not allowed today. There’s no point in partying anyway since her children are abroad – with her doctor-son serving as front-liner in Australia.

She spends her quarantine time reading – going back to the classics. One book she reread recently was Rebecca by Daphne du Maurier.

Another actress who loves to read is Pilar Pilapil (she also paints, in case you’ve forgotten). Turning 70 this Oct. 12, Pilar flew to her Cebu resort just days prior to the lock-down. She is safe there because she is far from the city where there are a lot of COVID-19 cases.

Her exact location is in Daang Bantayan where her resort, Malapascua, is located. She is kept company by her husband, Bernie Penas.

Like Pilar, Boots Anson-Rodrigo is also spending her quarantine period with her husband, Atty. King Rodrigo. Although Atty. Rodrigo has a beautiful house in Alabang, he and Boots decided early during their marriage to stay put at her Robinson’s Magnolia condo to be in the center of activities.

Since the start of the lock-down, the couple had been holding out well – although they miss badly some of their favorite dishes. Lucky for them, Atty. Rodrigo’s sister, Pempe, lives close by in Rolling Hills in New Manila. From time to time, they send out for sirloin tapa and longganisang hubad, which Pempe does so well.

Barbara Perez, 82, is also constantly craving for her favorite dishes prepared in the familiar restaurants she used to frequent with husband Robert Arevalo, 81, before the lock-down. Typically old school, Barbara still has yet to get the hang of ordering online, which is why she and Robert have to make do with home-cooked meals. Barbara, of course, is a fabulous cook and baker, but a tasty dish from some restaurant would be nice from time to time.

The good news is that Robert is doing well after a bout with a serious ailment. Everyone in the business is praying for his complete recovery.

Unfortunately, not everyone in showbiz is a hundred per cent okay. Lilia Dizon had been ill with cancer that had spread to different parts of her body way, way before the pandemic. She used to stay with son Christopher de Leon in BF Homes in Paranaque and it was a good thing her daughter (from her second marriage) Toni Abad pulled her out of there since Christopher eventually caught the virus.

Lilia is now staying in Toni’s house in Merville. Although the family is prepared for the worst, they still make sure that Lilia is very comfortable even if her health condition is not all that well.

Lilia’s contemporary, Rosa Rosal, is doing a lot better. Although confined mostly in bed these days, the great humanitarian is holding on quite well. Presently, daughter Toni Rose Gayda is looking after her at their condo unit in Pinnacle in Wack-Wack. She also gets constant attention from a beloved grandnephew, the former actor William Teo.

Had the coronavirus invaded the world at her prime, she’d surely be at the front-line in her capacity as Red Cross governor. She’d be out there trying to save as many lives as possible.

Sadly, COVID-19 also claimed the lives of at least two senior stars: Leila Benitez, 90, and Menggie Cobarrubias, 67. Sonny Parsons, meanwhile, died of heart attack due to heat stroke while on his way to Lucena where he was supposed to take part in a charity drive that would have helped those in need during the pandemic. He would have been 62 this June 13.

In the case of Liberty Ilagan, the former Sampaguita star died at 76 of complications as a result of chronic obstructive pulmonary disease or COPD on the eve of the lock-down. For more than a month, her remains had to be kept at the morgue because burial was not allowed.

No, she didn’t want to be cremated, but there was no choice. Her children plan to hold a memorial service honoring her once the government allows the holding of mass gatherings. That would surely be a bittersweet occasion - with the senior stars happy to see each other, but sad at the same time because they’ll be missing the wonderful person that was Liberty Ilagan.