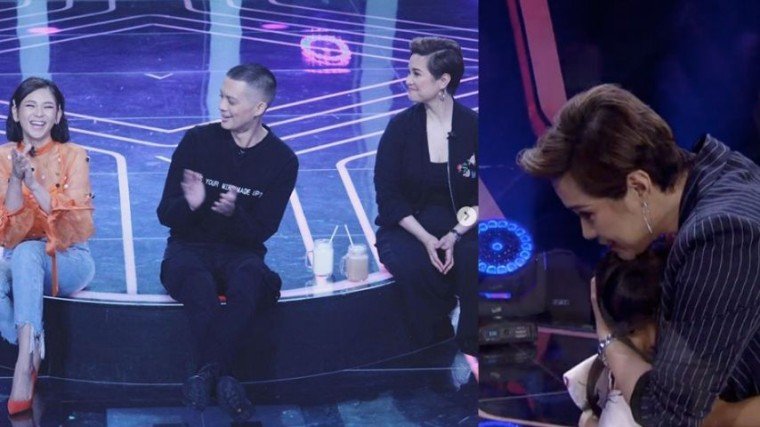 One may think that Lea Salonga, Bamboo, and Sarah Geronimo are the villains in this teleserye-like singing contest. But they’re not. They are not given information regarding the young contestant’s background – so as not to color their judgment. And I can imagine the guilt feelings they go through after rejecting some of these young hopefuls. It’s just that The Voice Kids is a singing competition and not a charity show. No, it’s not a musical Kapwa Ko, Mahal Ko.

ABS-CBN is currently running a weekend show that stirs viewers’ emotions the way Maalaala Mo Kaya does every Saturday night.

No, it’s not a teleserye, but a singing competition that could very well be a real-life soap opera, cliffhanger and all.

I am talking about The Voice Kids, which is now on its 4th season.

The show is hosted by Toni Gonzaga and Robi Domingo – with Lea Salonga, Bamboo and Sarah Geronimo serving as judges/mentors.

Aired Saturday and Sunday evenings, the show is fun and exciting to watch. Toni and Robi are both very effective as hosts, especially since they know how to deal with kids. (Trust me - not all hosts have a way with children.)

A bulk of the entertainment is actually provided by the judges, who have different types of personalities. Sarah is sweet and charming, but can be deliriously funny. The two older judges are affectionate and caring toward like – like she’s their baby.

Lea and Bamboo, however, are always at odds with each other – in a friendly and joking way, of course.

Among themselves, they are competitors. Now that the contest is at its Blind Audition stage, kids who pass that round can choose their mentor from among the three judges.

Lea, Bamboo and Sara do everything to lure those kids to their side – and that is one of the funnies parts of the program.

The Voice Kids is a competition among children. When they sing, the judges face the other way (at least, in the blind audition). It’s only when they’re impressed with what they hear that they turn around. That means, the kid is good enough to go to the next level.  At times, all three turn around for a contestant. Sometimes, there’s only judge who turns around, but that is already a good thing because that means the kid is safe and is given the passport to proceed to the next round.

Sadly, there are instances when no one turns around and that spells rejection for the child. All that is witnessed on national television.

I don’t know how the kid manages to show up in school after that, but that’s part of the risk when a child joins The Voice Kids.

Rejection is part of life – even as early as school life. I know of parents who want to put their children at either the Ateneo or at the UP Integrated School. Unfortunately, those academic institutions can only accommodate so much students and so the rest are rejected.

As early as grade school, kids are also made to participate in declamation contests. There will be winners and there will be losers. Usually, only the Top 3 will bring home prizes. The rest are “Thank you, kids” - as they say in beauty pageants.

Losing in these school competitions, fortunately, is cushioned by the fact that the child loses with other equally young contestants. As they say, misery loves company.

It’s different in The Voice Kids, however. The child is there on center stage alone and viewed by millions – only to be rejected by the three judges. It’s cruel, but that’s part of the format of the show.

The edition of The Voice Kids two weekends ago once more played out like a soap opera. And so there was this young girl there being raised by a single mother. To be able to provide for the two of them, the mother does laundry and accepts cleaning jobs. The mother also scavenges to earn P50 that would buy them rice.

The girl’s only hope to get them out of that miserable existence is to join The Voice Kids – and win. But like in a soap opera, she has to go through tragedies and the most recent one came in the form of a unanimous rejection from all three The Voice Kids judges.

One may think that Lea, Bamboo and Sarah are the villains in this teleserye-like singing contest. But they’re not. They are not given information regarding the young contestant’s background – so as not to color their judgment.

And I can imagine the guilt feelings they go through after rejecting some of these young hopefuls. It’s just that The Voice Kids is a singing competition and not a charity show. No, it’s not a musical Kapwa Ko, Mahal Ko.

There are also The Voice Kids editions in other parts of the globe: Belgium, the Netherlands, Germany, etc. Since I speak neither German nor Flemish, I have no idea if the contestants there also join this competition to be able provide for their respective families.

But that is mostly the case among the The Voice Kids aspirants here in this Third World country called the Philippines. Two Sundays ago, another girl from a poor family also said that she is trying her luck in the competition because “this is my only hope for a better future.”

That is especially sad since the girl seems to have lost her faith in education and is now only banking on winning in a singing competition to get her and her family out of poverty.

I can’t blame her. This early, she knows that her rich rivals have an edge over her. Those kids from affluent families could afford piano and guitar lessons to further hone their musical talent.

That daughter of the laundrywoman/cleaner for all we know didn’t have anybody to train her because her mother must have been too busy going through the trash of other people for their daily sustenance.

And heck, there was this one young rival who had a teacup Pomeranian with her – and it was that rich kid who was taken in!

But who said that life is fair?

In previous The Voice Kids episodes, viewers were also witness to young contestants crying after being rejected by all three judges. That must have been traumatic for the youngsters.

Is that child abuse? It’s difficult to make an outright accusation like that because those kids are not exactly brought there on stage kicking and screaming. Of course, nobody knows anymore what goes on when the losing kids get home.

At this point, maybe ABS-CBN should bring in child psychologists to do counseling on the children before and after each performance. Even the parents of the aspirants need counseling so that they would know how to deal with their children who are having their first taste of the bittersweet showbiz experience. The bottom line is – everything should boil down to the welfare of the kids.

But really – there must be a less harmful way to discover young singing talents.