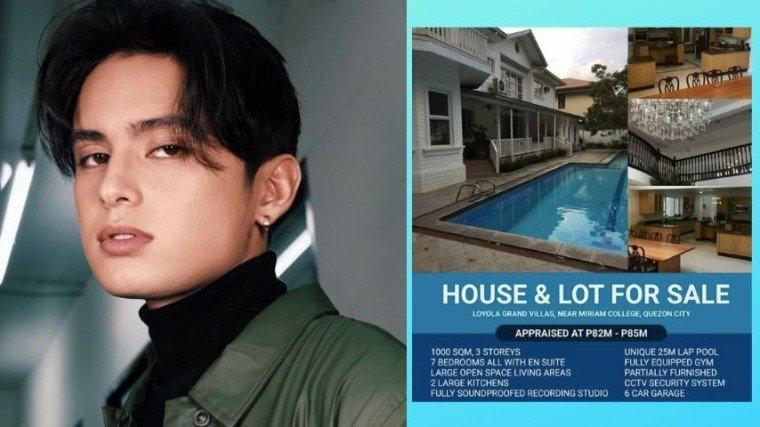 Over-all, buying a property there was one of the best decisions James ever made in his life. For one, it appreciated in value – thanks to the fact that he and his neighbors enter through La Vista, an exclusive village so much pricier than Loyola Grand Villas ever will be.

That showbiz headline drew a lot of speculations from the public. Rabid James Reid and Nadine Lustre fans insist that the actor-singer has to get rid of the house so that he is not haunted by painful memories of the recent past since it also served as a love nest for him and Nadine.

The more jaded among us, however, believe that James has to sell the property because he is already in need of cash – considering the fact that he hasn’t had a major project in a long time.

And then there are also those who are left wondering how James was able to afford a house that expensive.

It’s easier to answer the last one.

Clearly, James did not purchase that property at P85-M. I don’t have the official documents but anyone who understands even just a bit of the real estate business would know that he must have bought that at way, way below that amount.

There’s even a chance that he’s still paying for it on installment basis and wants the buyer to assume the balance. That’s not a crime. That’s how it is in real estate.

Is it overpriced at P85-M? The answer is No. To begin with, the guy, of course, has to profit from it. Surely, he is no fool to sell it at cost. Also, he has to leave leg room because interested buyers will definitely ask for discounts and the final price would certainly be lower than P85-M.

The standard rate for houses there today range from P31-M to P40-M. For a while, there was even a house there being sold for P18-M, but that must have been a rush sale. James’ property, however, is huge and bigger than most homes there and this is the reason why it carries a hefty price.

And through the years, he must have added a lot of improvements to it – like the gym, for instance. Oh, and the recording studio that must have cost a fortune to put together.

But even without those amenities, the house is beautiful in itself. It is a seven-bedroom residence that sits on a 1,000 sq. meter property. It is in Loyola Grand Villas, which should not be mistaken for La Vista - once dubbed as the Forbes Park of Quezon City.

La Vista was developed by the family of former First Gentleman Mike Arroyo on his mother’s side – the Tuasons, who originally were the Chinese Son Tua, except that they later Hispanized their name.

Situated off Katipunan Avenue, La Vista is populated mostly by the rich and famous.  From the mid-1980s to the 1990s, it was home to powerful politicians: Francisco Tatad, Nikki Coseteng and the late Raul Roco and Miriam Defensor Santiago (she moved there much, much later though). A lot of cabinet members also lived there: Vicente Jayme, Ping de Jesus and Lourdes Quisumbing. Its most famous resident today is Charo Santos Concio.

One day toward the late 1980s, a portion of the subdivision’s perimeter wall (on the Ateneo side) was knocked down to serve as entrance to the residents of the then newly-developed Loyola Grand Villas. La Vista went to court, but lost.

Today, the La Vista gate (there’s only one) is also used as passageway to Loyola Grand Villas, which has streets named after countries.

It has also become home to entertainment people. Jaclyn Jose was the first one there. Eventually, the likes of Claudine Barretto, Jericho Rosales and TV’s boy genius Deo Endrinal also built their residences in Loyola Grand Villas.

James Reid is in good company.

Prior to Loyola Grand Villas, a lot of celebrities opted to stay in the subdivisions off Commonwealth Avenue – Don Antonio, Tivoli Royale, Don Jose, etc. Julius Babao and wife Tintin Bersola still live in Don Antonio - in a huge property that houses their enviable collection of paintings. The family of Raymart Santiago also transferred there (after staying in East Greenhills for so long) when the patriarch Pablo passed away sometime in 2000. Even Rosanna Roces, at her peak, lived in the area - in a pink house that she purchased in 1998 for P5-M (she claims it was overpriced).

A lot of celebrities decided to stay in the Commonwealth Avenue area and in Loyola Grand Villas because those places are relatively near the two major networks: GMA and ABS-CBN. More importantly, the price range of the properties there were basically what was within their budget.

It is therefore not surprising that James Reid chose to stay in Loyola Grand Villas because to get to ABS-CBN for ASAP, he only has to get to Katipunan and  take C.P. Garcia and that would get him to Quezon Avenue. Getting back to his house is another story because of Katipunan Avenue’s notorious traffic.

When James bought that property in that subdivision, however, he probably didn’t know that during Ondoy in 2009, a huge part of Loyola Grand Villas was submerged in water. Yes, Jericho Rosales took that as an opportunity to go surfing.

That Loyola Grand Villas got inundated no longer came as a surprise to La Vista old-timers because until the early 1970s – when Nora Aunor was still a La Vista resident – that place was rice paddies and was always prone to flooding.

And since a great portion of Loyola Grand Villas carries a Marikina address, it is not surprising that it had been identified as part of the fault line.

This gated village, however, is still a great place to start a family and raise children. For one, the place is very secure. The neighborhood is also very peaceful.

Over-all, buying a property there was one of the best decisions James ever made in his life. For one, it appreciated in value – thanks to the fact that he and his neighbors enter through La Vista, an exclusive village so much pricier than Loyola Grand Villas ever will be.

And now that his career has taken a temporary setback, he is obviously going to use the property to tide him over. After he sells that, he can move to a spacious condominium unit anytime and still be left with a lot of cash.

James Reid is still very young and has the world laid out before him. From what I know he is set to work on a new project soon.

When the time comes he is able to recover – and he surely will, given his talent – he’d be able to afford another piece of property way better and more valuable than the one he is selling at the moment.

(Next: Why most young celebrities no longer live in truly posh subdivisions.)

The Butcher | What Biyahe ni Drew failed to show in Baguio