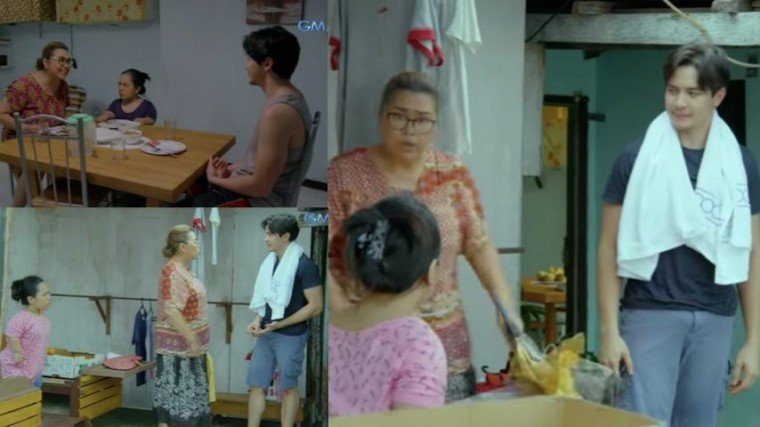 Now that the show is into its second week, it has become more of a joy to watch – unlike during the first two to three initial episodes when there was nothing but despair in the story. The happy trinity of Alden Richards, Elizabeth Oropesa and Jo Berry truly works – with the viewers always looking forward to their scenes together as a family.

It took quite a bit to unwrap the plot of The Gift, GMA’s newest nightly drama series, starring Alden Richards. The story is set in Quiapo and Divisoria in Manila  A.E. (After Erap).

In the pilot episode, the viewers are introduced to the character played by Alden. His name is Sep, short for Joseph. Physically, Sep’s well-scrubbed good looks make him look like he just stepped out of a men’s fashion magazine – summer edition since he is always in easy, comfortable attire...The aura he projects in his Divisoria community, however, would make one think he leaped out from the pages of the Book of Saints. He is helpful, kind and caring. There isn’t an ounce of nastiness in him – and this makes him very rare in this sinful, modern world.

Good looks, plus near-saintly traits – is that combination still possible today? Is he an angel from heaven?

His beginnings are revealed very early on in the story. His father, played by TJ Trinidad, is a tricycle driver. His mother, Jean Garcia, sells food, except that she must be one lousy cook because she can never make a sale unless she sells her viands at bargain prices – buy one, take one.

It doesn’t take a genius to figure out in the initial telecast that Alden’s parents will go through trying times – but certainly not of the magnitude that could rock the Ring of Fire on both sides of the Pacific Ocean.

Aside from vending cooked meals, she also sells gems passed on to her by some rich jeweler. She proves to be even lousier at this job: she has those pieces of jewelry snatched from her by motorcycle-riding thugs.

And then, Alden as a kid gets seriously ill and has to be hospitalized. Their tricycle, the family’s remaining source of income later also gets wrecked, until there is nothing left of their material possessions.

Not thinking straight, TJ Trinidad decides to rob a neighborhood rural bank and to disguise himself, he covers his face with a handkerchief – leaving his eyes exposed. Mestizo to his very core, how many in his community did he think has hazel eyes like his?  Also, of the so many banks in this world, he robs that one where the employees know him since he accompanies his wife there in her quest to make at least one decent food sale.

He dies in that foiled bank robbery – surely to the delight of a lot of viewers who are so relieved to have this world rid of another bumpkin.

Widowed with one sick child, Jean Garcia now has to face another problem: eviction. It’s obvious why the family is always several months behind rent. The house they are renting is one of those old grand houses with a high ceiling and all-wood panels. Above their dining table is a crystal chandelier. Whoever the production designer of The Gift is deserves a good spanking.

The biggest blow happens when the young Alden gets separated from his mother.  Only the outbreak of World War III in their community is needed to complete their misery.

With tragedy after tragedy happening to Alden’s family, most of the viewers must have gotten so depressed, they just tuned in instead to the news (State of the Nation with Jessica Soho airs on the same time slot as The Gift). Surely, watching updates on the African swine flu is far more cheerful and uplifting than this new Alden Richards program.

No wonder, The Gift was trampled on by The General’s Daughter in the ratings game.

Mercifully, by week’s end, some happy events take place in the show. Alden is all grown up now and even wins the title of Mr. Divisoria. Most of the characters in the story are happy – and so are the viewers who must have overdosed on anti-depressant pills the week before.

Once again, the viewers see Elizabeth Oropesa and Jo Berry, who first appear in the pilot telecast. The mother-daughter tandem becomes Alden’s foster family and they love him and take good care of him.

It’s a relief to see these two outstanding actresses, particularly Oropesa, who is so light and funny. She makes all her scenes come to life with her presence. On the part of Jo Berry, wasn’t she the acting wonder of Onanay? Here in The Gift, she duplicates the sharp acting chops she displayed in that very successful drama where she managed to hold her own against Nora Aunor and Cherie Gil.

The viewers are also introduced to Alden’s leading lady in The Gift – Thia Thomalia. I first saw this beauty queen (Miss Eco International 2018) as a guest co-host in the Solenn Heussaff-Gil Cuerva lifestyle show Taste Buddies.

In that program, I was immediately impressed not only by her beauty (doesn’t she look like Ann Hathaway?), but also by her screen presence. In Taste Buddies, she already looked very comfortable in front of the camera.

But since The Gift is a drama series that requires skilled acting, she seems to still be working her way around her new profession. I have faith, however, that she’ll get there in time.

What remains to be seen, of course, is her onscreen chemistry with Alden. Are they going to be another AlDub? Or could Thia be another Kathryn Bernardo to Alden and with him duplicate the success of Hello, Love, Goodbye?

At this point, the success of Alden’s new show depends on how the creators of The Gift will navigate the series. Alden already seems to be giving his all to make his new program reach the top of the ratings chart. Aside from perpetually switching on his luminous charm, his performance here cannot be faulted. He continuously develops his acting skills – and the viewers see all that progress in The Gift.

Now that the show is into its second week, it has become more of a joy to watch – unlike during the first two to three initial episodes when there was nothing but despair in the story. The happy trinity of Alden Richards, Elizabeth Oropesa and Jo Berry truly works – with the viewers always looking forward to their scenes together as a family.

The trailer of The Gift actually shows scenes where Alden is bound to go through more anguish in life. I can only hope the writers of the series are able to temper the flow of the dramatic scenes in the story

Please refrain from turning the show into a full-blown tearjerker. The title of the series, after all, is The Gift and not The Grief.