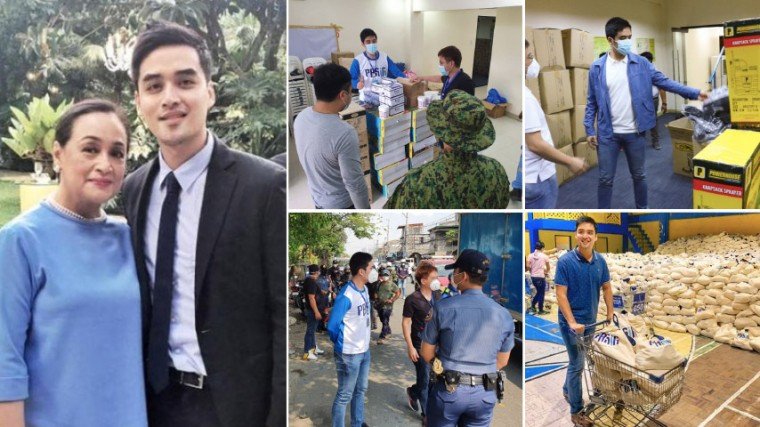 Coney Reyes was eyeing a house in La Vista, Quezon City in the early ’8os. But someone beat her to getting that house. She eventually found a house that suited her family’s needs. This was in Valle Verde V. But imagine if Coney opted to buy the La Vista house. Would it have been possible for Vico to have ended up as mayor of Quezon City, where his first cousin Gian Sotto is currently vice mayor?

In the early 1980s, the administration of Maryknoll College (now Miriam) sold a huge part of the back lot of their Loyola Heights campus off Katipunan. The property was bought by a businessman named Cornelio Rivera, who turned the area into a neighborhood community that was eventually absorbed by La Vista subdivision.

La Vista remains a very exclusive gated subdivision on that side of Quezon City and its most popular residents are former President Gloria Macapagal Arroyo and family.

The names of the streets in La Vista were taken from the different ethnic Philippine tribes: Maranaw, Badjao, Ifugao, Gaddang, etc. Since that newly-developed area was one of the side streets of the main road Mangyan, it was initially called East Mangyan. In time, however, the residents decided to honor the Blessed Mother and changed the street name to Marymount.

One of the pioneers there was then Maryknoll College president Dr. Lourdes Quisumbing, who eventually became education secretary during President Corazon Aquino’s administration. Another Cory cabinet member who chose to live in Marymount was Jose “Ping” de Jesus, who later would serve three more Philippine presidents.

In 1983, Cornelio Rivera began building ready-for-occupancy houses done in the Mediterranean style. The first to snap one of those homes was former Senator Francisco Tatad.

Another buyer was Vincent Jayme, the son of Vicente Jayme, who served as Department of Public Works and Highways chief and, later, Finance secretary - also under Cory.

One day during the third quarter of 1984, the uniformed household staff in the neighborhood got excited when they saw one of the prospective buyers of a still unsold house at the very end of the street (it was a dead-end). She was a familiar face on TV and everyone then called her Coney Mumar.

Coney Mumar started out on TV as Coney Nubla during the pre-martial law ABS-CBN where she was a promo girl (today’s equivalent of VJs). In1974, she tried acting and turned out to be excellent at it. In the drama anthology of Boots Anson-Roa (now Rodrigo) called Elisa (Boots’ Christian name), Coney gave a very impressive performance as the kept woman of Arnold Mendoza. The highlight of that episode was a miscarriage scene that showed her bleeding to death.

On the big screen, she played leading lady to Ramon Zamora in the Crazy Dragon series and was also cast as the third wheel in the Vilma Santos-Eugene Torre film Basta’t Isipin Mong Mahal Kita.

Later, she became a Baron Travel Girl finalist – still as Coney Nubla (she was actually born Constancia Angeline Nubla). In 1975, when Student Canteen was revived, she was cast in lieu of Leila Benitez, who by then was already living in the United States. This time around, she used her mother’s maiden name Reyes - maybe because people around her felt Coney Reyes sounded more showbiz.

In March 1982, Coney caused a national furor after she was fired from Student Canteen and became the underdog. It all started when a disgruntled Helen Vela left the show – with Coney openly sympathizing with her good friend.

Things turned out well for her in the end: She was taken in by rival Eat Bulaga to replace Chiqui Hollmann, who left the show in September 1981 and had since joined Student Canteen. Talk about musical chairs.

Although she became an even bigger name after the Student Canteen-Eat Bulaga controversy, things weren’t exactly happy in her home life. She had married basketball star Larry Mumar only months after joining Student Canteen, but the union sadly collapsed in less than a decade. Once again, she became Coney Reyes on screen.

During their marriage, Larry and Coney were able to build a home in Marikina for their two children: Lawrence Anthony (LA) and Carla. After the separation, Coney apparently had to leave the house in Marikina and find a new place for herself and her two kids.

The Marymount property in La Vista would have been ideal for them because it was right behind Maryknoll. To get to Ateneo, there was a makeshift bridge behind the house of Justice Francisco, which the kids in the neighborhood used to reach the campus. It was perfect for Coney’s children.

The Katipunan area is also dear to Coney because she studied in Maryknoll. Among her schoolmates there were former Senator Nikki Coseteng (a La Vista resident to this day) and Menchu Genato-Henson, the Tita Maggi in the old noodle soup commercial.

The house Coney wanted to buy was modest in size – at least compared to those huge residences in La Vista. It had three bedrooms – all with en suite bathrooms – plus a nice lawn. Its selling price: P950,000. You read that right. But this was at a time when the exchange rate was $1-P14.

In the end, it was a family from Davao that beat Coney to that property. That served as their Manila base since the two Davao kids went to college in Ateneo.

As for Coney, she eventually found a house that suited her family’s needs. This was in Valle Verde V.

Did she not regret buying the house in La Vista? Maybe only once – when Iglesia ni Cristo (INC) celebrated its 75th anniversary in 1988. Since all roads led to the INC main headquarters in Commonwealth Avenue, traffic stood still in that part of Quezon City and in all thoroughfares leading to it.

Eat Bulaga that time was being staged daily at the Celebrity Sports Plaza – right beside Broadcast City. On that day, none of the hosts got to the studio on time and the show was forced to air movie trailers for a whole 30 minutes.

Coney may have been the first to arrive among the program regulars, but she was still late nevertheless – having come from Valle Verde in Pasig. If only she chose to live in the Katipunan area, she would have gotten there on time since that was only a five minute drive away. Of course, she obviously loves her Valle Verde area since she has stayed there for the longest time.

In 1989, she gave birth to youngest son Vico Sotto – in Pasig, where he is now city mayor. Today, Mayor Vico is the toast of the nation for his spectacular handling of the coronavirus crisis in his city.

But imagine if Coney opted to buy the La Vista house. Would it have been possible for Vico to have ended up as mayor of Quezon City, where his first cousin Gian Sotto is currently vice mayor?

This much we can say: Quezon City’s loss absolutely turned out to be Pasig’s gain.

YOU MAY ALSO LIKE:
The Butcher | “Love Handles” in the Time of Coronavirus