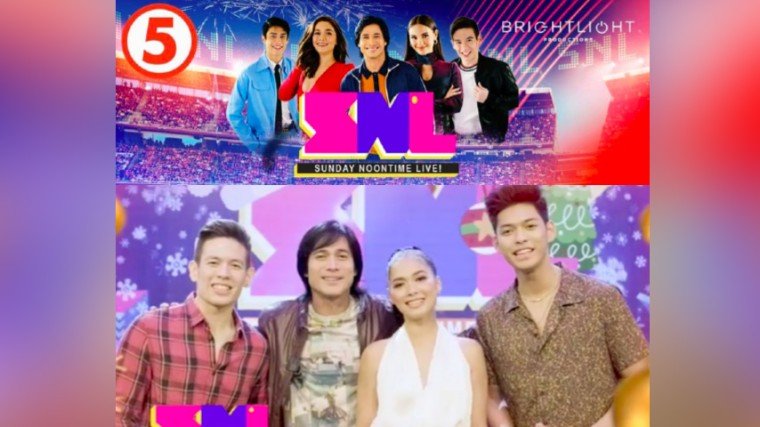 And whoever thought of the show’s title that had SNL as acronym? It’s so close to SLN or Suma-langit Nawa, which eventually was what happened to the program.

Even during times of plenty, there was always only enough advertising money for two noontime shows on television.

The glory years of noontime programs came during the second half of the 1980s. This was the period when Lunch Date on GMA was giving RPN-9’s legendary Eat Bulaga a good fight. A third tried to get into the fray – Chibugan Na on ABS-CBN. In a matter of months, it was eased out of the competition.

Last year, some businessmen tried to cash in on the movement that occurred on Philippine television after the cancellation of the ABS-CBN franchise by producing lunchtime programs. Net 25 came out with Happy Time. It is still struggling in the ratings game.

And then, there’s the more ambitious Albee Benitez, a former congressman whose Brightlight Productions decided to mount a string of shows on TV5, including the noontime program LOL or Lunch Out Loud.

When LOL premiered on TV5 last October, it proved to be a reminder of how many entertainment personalities were displaced after ABS-CBN lost its franchise to operate on free TV. LOL absorbed quite a number of them.

But with about a dozen or so hosts, the studio’s stage area began to look like an evacuation center after a killer typhoon. The number of mainstays read like a grocery list: Billy Crawford, Alex Gonzaga, Bayani Agbayani, Wacky Kiray, K Brosas, Gelli de Belen and husband Ariel Rivera, KC Montero, Valerie Concepcion, Jeffrey Tam, and so on and on and on.

I’m sure I missed out on several more names, but requiring me to remember everyone will take a huge toll on my memory bank and so let’s leave it at that. In the mid-1970s, there was a singing troupe called Sangkatutak Band and if only everyone in the LOL bunch knew how to sing, they could have revived that musical group that counted among its members Anthony Castelo and even Celeste Legaspi.

Sangkatutak Band didn’t last very long. With so many members, it must have been very difficult to manage, especially since so many of them were already established soloists when they grouped together. What happened there was a case of too many singers spoiling the musical number.

In LOL, that scenario was forthcoming. Trouble began when everyone started talking at the same time. It was like a modern-day reenactment of the biblical story that was the Tower of Babel. Everyone felt the need to be acknowledged and so there was Wacky Kiray at his loudest and that wasn’t a pleasant sound to hear.

LOL also suffered from extreme birth pains that no obstetrician could handle. Just to gain viewers’ attention, they played a prank using Alex Gonzaga who pretended to faint on-cam. I don’t know who else was into it, but it was obvious that Gelli de Belen was clueless in that entire charade. It was she who took charge – showing concern and all, but not in an overly dramatic fashion. The show’s writers must have been disappointed because they didn’t get the drama that they must have hoped for.

That prank was actually an epic failure because it only succeeded at annoying the viewers. From my end, I stopped watching it altogether. Well, there were no separation anxieties since that program never appealed to me in the first place. I only watched it to be able to come up with a review for this column. Monitoring the show, however, was too painful and unbearable to the soul. And so I threw in the towel.

Was I a huge loss to the show? Maybe – considering the fact that it didn’t have that many viewers. I even suspected that there were probably more hosts than those actually watching the show on free TV at noontime. One viewer less was enough to make them scream “Ouch!”

Around the Yuletide season, however, I became curious and decided to give LOL another try. That turned out to be the best Christmas gift ever. The flow of the show had improved. More importantly, that huge group of hosts were able to develop chemistry among themselves.

Maybe it helped that some of the hosts were comedians and so they were able to inject humor into their repartee. I also recognize the fact that a lot of the show’s mainstays are extremely talented artists. For instance, I find K Brosas to be truly gifted. Wacky Kiray, for all his loudness, is quick on the uptake.

In the case of Bayani Agbayani, he is a disciplined comedian who knows when to shut up so that he doesn’t upstage the others. This kind of discipline works very well for the show since that is what brings order and harmony in LOL. But trust Bayani to bring in the comedic goods when it’s his turn to take the spotlight. He is among the best assets of the show.

As for the other aspects of the show, I also saw marked improvement in some of the segments – although very few could claim originality. Surely, you and I had seen those in other programs.

There is one segment though that I truly enjoy watching: Beat the 2. In this game, Billy Crawford asks the mainstays to give the English meaning of a Tagalog word – or vice versa – in two beats. It’s a simple game, really. But it can be tricky because it will test your mastery of English and Filipino – or what you still remember or may have forgotten years after leaving school.

In this age of gadgets and smart phones, it gives us once more the opportunity to think – and think fast. It also shows to the world how much or how little you have up there.

If only for this segment and the now-wonderful camaraderie among the hosts, I wish this program would last longer than its sister show, Sunday Noontime Live or SNL that saw its final episode last January 17.

So what went wrong with SNL? Like with daily lunchtime shows, there is only room for two even in Sunday noontime programs. ASAP Natin ‘to is so well established, its audience will follow it in any platform. As for All Out Sundays, there are still loyal Kapuso fans who will watch anything GMA puts in its Sunday 12 noon slot.

When Brightlight Productions put up SNL, it was also partly to help Kapamilya stars who didn’t have shows anymore as a result of ABS-CBN’s franchise cancellation. Now, if one of its purposes was to do charity work, maybe its producer should have just revived Damayan and Kapwa Ko, Mahal Ko and made Rosa Rosal sing (hey, the woman was a torch singer in her youth).

SNL was supposed to be a musical – so it was imperative for the production to have hired the best singers in the profession. But its headliners weren’t exactly the best in the field.

Piolo Pascual can sing and sing relatively well, but his voice doesn’t have enough volume to lure viewers away from their Sunday siesta. Catriona Gray, of course, is a terrific singer. In the segment called “KantoOke,” she was the one who always saved that part of the show from becoming a total embarrassment.

On the part of Maja Salvador, she is actually overrated as a dancer. She is a fine actress though. As a singer, hmm, she is a bore.

The two youngsters – Jake Ejercito and Donny Pangilinan (eventually replaced by Ricci Rivero) – could dance very well. But when made to sing, they sounded like they were being coerced by a group of sadistic cops to admit to a crime they didn’t commit.

SNL had a roster of trained singers who all sang magnificently. They were winners from the various ABS-CBN competitions – like Zephanie Dimaranan. Sadly, at this point of their respective careers, they still lack the star power to attract the Sunday noontime TV audience.

Given the show’s lineup of talents, it was clear early on that SNL was bound to fail – with the producer unable to recoup whatever investment was pumped into the show. To begin with, musical programs had always been costly to mount. This was true even during the prime of Pilita Corrales.

And whoever thought of the show’s title that had SNL as acronym? It’s so close to SLN or Suma-langit Nawa, which eventually was what happened to the program.

Yesterday, ABS-CBN’s ASAP on A2Z was aired simulcast on TV5 – on the same slot vacated by SNL. Benitez, from what I know, is still leasing that time slot from TV5. If that’s true, he can still earn a little by sub-leasing it to ASAP. But how true are the rumors that he had to ask permission from Malacanang to be able to deal with ABS-CBN?

As to LOL, there are also reports circulating that Brightlight cannot cancel the noontime show even if it is also losing heavily since one of its hosts was granted a loan amounting to millions. It is also said that there is a chance that Showtime will eventually air simulcast on TV5 – with LOL serving as its pre-programmer.

There really is so much going on in the TV landscape at the moment. To those planning to join television as independent producers, there are rules that hardly ever change. Remember – there will always be only room for two.

We always like to say that two’s company, but three’s a crowd. In the overcrowded world of television, however, two makes for an enemy and three is financial ruin.

The Butcher | A birthday tribute to Gloria Sevilla: Long live the Queen of Visayan Movies!

The Butcher | The Holy Innocents in today's media

The Butcher | Why free TV likes asking for freebies 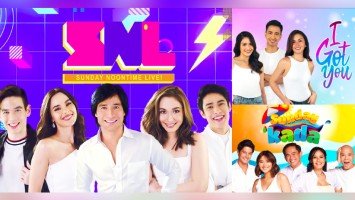 Mga shows na Sunday Noontime Live, I Got You, at Sunday Kada, to air season enders