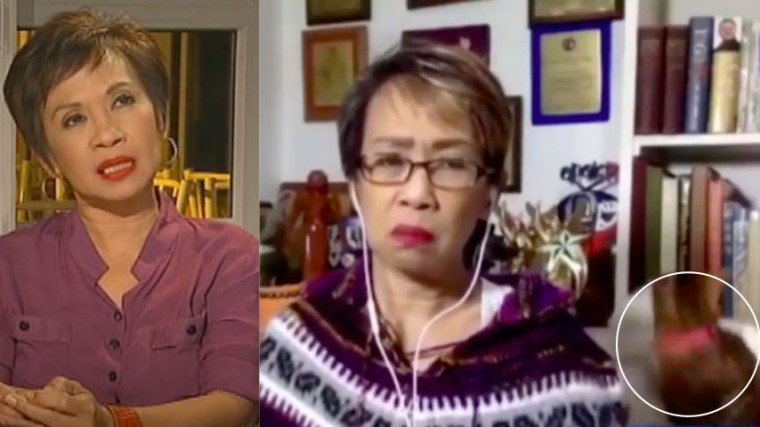 This pandemic season, however, turned the world upside down – in a good way for Doris though. It all began when most broadcasters were made to go on-air via zoom during the lock-down. Doris had to do her ABS-CBN show from the privacy of her home – with her cats unintentionally becoming scene-stealers in the background. At one point, co-anchor Alvin Elchico chided her in jest about how she should make her cats wear underwear. That started the softening of Doris’ public image. So she isn’t so catty after all. She is a cat lover so she can’t be all that bad.

Catty. That was the image projected by Doris Bigornia when she first burst into the newscast scene in this new millennium. She had always been this tough talking lady you don’t mess around with.

This must have been the reason why ABS-CBN put her out in the streets of Metro Manila where she could take on anybody. In time, her network billed her as Mutya ng Masa.

She was always mostly visible in TV Patrol where she was a stand-upper. Now, TV Patrol had always been guilty of tabloid reporting on TV. But with Doris Bigornia on board, she put civility in broadcasting even two rungs lower down the gutter – no thanks to her use of street language.

Many times, she would use the term “walang puknat.” To most Manilenos, that initially sounded like “poknat” or bald spot on the head.

But it was “puknat.” No, it didn’t come off like a cuss word when she said it. After a while, with her frequent use of the term “walang puknat,” followers of ABS-CBN eventually accepted it as something that means “relentless.”

Sorry though, that still has no place in polite conversation. It simply grates on the ears. “Walang humpay” is more acceptable. Or why not just stick to the basic “walang tigil”? Obviously, she wants to make her report colorful.

Colorful language, however, has its limits, especially on television. And Doris went beyond that when she began saying “tarantado” on the air.

“Tarantado” basically means jerk in colloquial language. But it could also be used as a strong cuss word that is very offensive. Doris’ vocabulary actually offended the sensibilities of the more conservative viewers.

But to the masses her ways and language were clearly acceptable. And this is why we should constantly worry about these people who have yet to be taught discernment.

ABS-CBN apparently was happy with her work. She obviously brought in the ratings. Doris, in fact, became so popular that John Lapus even did a parody on her by creating the character Doris Gorgonia.

Why, she even had a rivalry with Susan Enriquez of GMA-7. Susan, of course, is Doris’ complete opposite. Susan is gentle, while Doris is rough. To this day, Susan, in fact, still retains her charming provinciana ways, which delights her viewers. Maybe they became rivals because they both appeal to the masses – although in contrasting ways.

The day though came when ABS-CBN became unhappy with Doris. She had internal issues with the management of her network. She just disappeared and went off the air.

But in time, she came back. She was as feisty as ever – on TV and even in public. Proof of that was a video clip that went viral as a result of an ugly confrontation she had with another concert-goer at the Mall of Asia Arena a few years back. Netizens turned against her and their posts dripped with enough nastiness to sink the surrounding reclaimed areas of Mall of Asia.

What about her feud with MMDA spokesperson Celine Pialago? She lost that battle again on social media. Some people didn’t even bother to check who was at fault. They just took the side of Pialago and condemned Bigornia.

It’s actually difficult to engage this former beauty contest aspirant in a public word war. Ms. Pialago is so charming she could push a pedestrian from the top of a flyover and still be forgiven for it by the public. Whoever in MMDA put her in that position is a genius. Her presence had never failed to soothe the nerves of motorists traversing EDSA.

To be fair to social media users, they cheered Doris at the height of the Janet Napoles issue some seven years ago. Napoles by then had been brought to Fort Sto. Domingo. Posted there to do a report, Doris was put in a very difficult position because none of the guards there wanted to be interviewed. Her coverage was being conducted live and the situation had turned awkward since there was nothing going on during the entire time.

A less seasoned reporter would have killed himself on the spot due to embarrassment (at least that would be news), but Doris managed to hang on and turned everything into a comedic scenario by asking the guards to greet their loved ones Merry Christmas. Netizens loved her for that.

Sadly, when she later figured in a vehicular accident while aboard an ABS-CBN van, a lot of netizens still proved to be so unchristian – with some of them wishing the worst for Doris.

This pandemic season, however, turned the world upside down – in a good way for Doris though. It all began when most broadcasters were made to go on-air via zoom during the lock-down. Doris had to do her ABS-CBN show from the privacy of her home – with her cats unintentionally becoming scene-stealers in the background. At one point, co-anchor Alvin Elchico chided her in jest about how she should make her cats wear underwear.

That started the softening of Doris’ public image. So she isn’t so catty after all. She is a cat lover so she can’t be all that bad.

Then one day, kitty hell broke loose while she was in the middle of a zoom interview. Her cats started pouncing on each other. But to Doris’ credit, she kept her composure – although worry was etched all over her face.

That video went viral and was even picked up by news organizations all over the world. Doris became internationally famous. Or was it the other way around – with Doris simply basking in the glory of her cats?

She later put up a vlog that also featured her charming and pretty daughter Nikki. It was there where she explained how her beloved felines came into their lives. At one point, she even taught Nikki in a gentle and loving manner political correctness. Puspin (pusang Pinoy) and not pusakal (pusang kalye) is the correct term – so she told her daughter.

What’s more admirable about mother and daughter is the fact that they rescue cats, regardless of breed. In the case of Jennylyn Mercado and Dennis Trillo, the couple maintains 11 cats. But do they even have one Puspin? Of course, that’s no longer our business. Let’s just comfort ourselves with the fact that there is a Doris who doesn’t discriminate against strays.

This pandemic has wreaked havoc globally. Lives and careers are ruined because of COVID-19. Even the future of the young generation is at stake.

If there’s anything good that happened to our lives it is the cleaner air we now breathe. Oh, even the animals are happier now with less intervention from humans.

In the broadcast world, a miracle also took place - with the public image of Doris Bigornia drastically changed: From catty to purring kitten.