The Butcher | Here's to a hoppin' Year of the Rabbit! 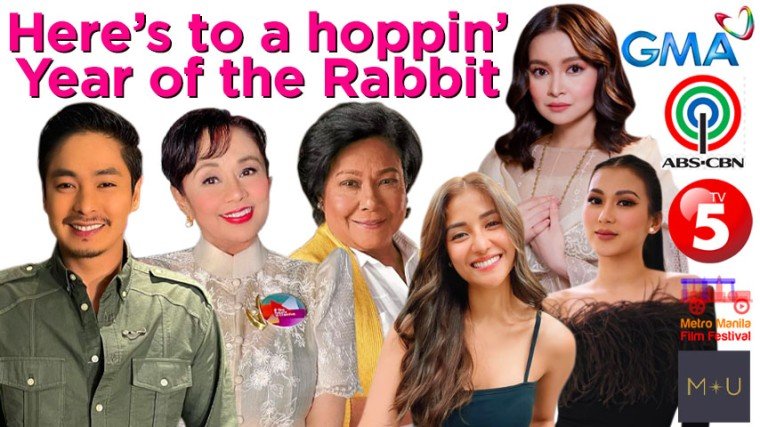 In the Gregorian calendar, 2023 rolled in just three weeks ago. And yesterday, we ushered in the Chinese New Year. It’s therefore not too late for me to make wishes for this year – the year of the Rabbit. So hop in as I enumerate my wishes for the entertainment sector this 2023.

In the Gregorian calendar, 2023 rolled in just three weeks ago. And yesterday, we ushered in the Chinese New Year. It’s therefore not too late for me to make wishes for this year – the year of the Rabbit. So hop in as I enumerate my wishes for the entertainment sector this 2023.

* For television to pick up this year. It is a dying industry, but it needs to stay alive because so many in this country still rely on free TV for their entertainment. Of course, there is Netflix, Viu, and even Vivamax. Unfortunately, the poor still can’t afford these streaming services.

There’s also the sector of the elderly who have already gotten so used to traditional TV. It may be too late for them to make changes at this point of their lives.

* For ABS-CBN to get its franchise back. Philippine television needs ABS-CBN for the industry to rev up. Let’s admit it, ABS-CBN had always been known for its trailblazing efforts. Local TV will never be the same without ABS-CBN and its innovations

* For TV5 to finally find its place in the sun. Or maybe to find the right engineering people to help boost its signal.

* For theater owners to find ways to make admission prices more affordable. Although onions are not needed to operate movie houses, I understand that operational costs have really shot up.

Prior to the pandemic, the cost of a single screening in those small theaters at Robinson’s Cinemas in Galleria was P15,000. Never mind if there were only one or two people in the audience.

I can imagine how the cost of running a cinema has doubled. Electricity has become so expensive – and that’s the first ingredient in operating a movie theater.

The cost of movie-making has also gone up. It’s no surprise therefore that movie tickets had become so expensive.

It’s no wonder, most people have opted for streaming services. Those movies will end up on Netflix, anyway – so they say. And that’s true.

So do we expect cinema to die earlier than television?

* For Nora Aunor and Vilma Santos to finally do a movie together. Of course, they’ve already teamed up in three movie projects in the past. But that was so long ago -  with Ang T-bird at Ako in 1982 as their last. Prior to that, they did Young Love and Ikaw ay Akin where they hardly had scenes together.

Maybe it’s now possible for them to work together again. Vilma is out of politics, while Nora’s health had tremendously improved – thank heavens.

* For Barbie Forteza and Mikee Quintos to have a project on GMA together. They are the two spunkiest actresses in their network. It would be nice to see them together.

* For Barbie Forteza to do projects for the big screen again so that she could finally win an Urian. The Manunuri ng Pelikulang Pilipino had always acknowledged her great acting talent. The critics’ group had, in fact, rewarded her with two acting nominations – for Marquina and Tuos. The next time around, I hope she finally brings home the award.

* For Sanya Lopez to do more projects for GMA. She’s one of the most bankable properties of her network anyway. Sanya has also earned the wonderful reputation for being easy to work with on the set. May she never change and continue to be a nice person.

* For Coco Martin to do an indie project or two to be able to regain his core. While I am happy for his success on television, I also wish to see him in indie projects once more to feed his soul.

Although the big bucks are on TV, soap opera acting can actually ruin an actor’s craft. Sure, Coco makes movies from time to time. But what he does are geared for financial success – like his recent Labyu with an Accent.

Coco is one of the best actors in local cinema. I hope his TV stints do not dull his acting skills.

* For the Metro Manila Film Festival (MMFF) to have better entries this December. The last one only had three films that may be considered of festival quality.

Deleter introduced new scare tactics in the genre of horror. Mamasapano is an important historical film about the SAF tragedy. Family Matters may have just been dismissed by some as another Tanging Yaman or Seven Sundays, but it is always good to have entries about family dynamics in the MMFF.

Labyu with an Accent is a bit entertaining, except that its premise is unreal. Nanahimik ang Gabi? The only saving grace there is the performance of Heaven Peralejo.

As per my observation, there are less MMFF controversies when the competition is tough – like when all the entries are deserving to be part of the festival lineup. In 1982, for example, among the entries were Haplos, Moral, Himala and Santa Claus is Coming to Town, a well-made family drama by Elwood Perez.

Although Himala won practically all the awards, nobody complained because it was a contest among the best. In more recent years, the judges had been scraping the bottom of the barrel to come up with winners. That’s when all the questioning begins.

* For 24 Oras to have bona fide entertainment news in its "Chika Minute" segments. Viewers are not particularly interested to find out what the Kapuso stars do during their spare time or how they spend their vacation. To make matters worse, most of these GMA starlets are not even household names yet. So, whatever they do should not be considered a major event worthy of airtime.

* For pageant fans to realize that the Philippine delegate to the Miss Universe cannot be in the Top 16 all the time. The country’s reputation doesn’t necessarily get tarnished if Miss Philippines doesn’t enter the semi-finals.

The truth is, a beauty queen’s journey doesn’t end in the international competition. It goes beyond her reign as Miss Philippines – or what she does with herself when she is no longer a beauty queen.

I have the utmost respect for Elizabeth de Padua, for instance, who became a doctora (now based in the East Coast) after relinquishing her crown as Binibining Pilipinas. Never mind if she didn’t enter the semi-finals when she competed in Miss Universe in 1976.

For as long as the Philippine delegate gives a decent performance, then that should be okay. At least, no one among the Philippine representatives had been involved in acts of bullying. Weren’t there candidates who were accused of bullying an Asian contestant who didn’t speak English well during the time of Catriona Gray?

To the credit of most beauty queens from the Philippines, they make sure they are on their best behavior while competing abroad. That, to me, is the essence of a true beauty queen.

* For the bashers and defenders of Alex Gonzaga to realize that the kind of behavior she displayed when she smeared cake icing on waiter Allan Crisostomo goes beyond rudeness, arrogance and class warfare. She wasted food at a time when prices of basic commodities had gone sky-high.

Why do her defenders insist that cake smearing is now de rigueur at birthday parties? Has the world become that calloused?

Think of those hungry children who salivate over those cakes lined up at the display windows of bakeshops. And then some netizens even have the temerity to encourage wastefulness. There really is something seriously wrong with our sensibilities.

* For some social media users to have common sense and the ability to sharpen their reading comprehension so that they don’t just shoot from the hip every time they make a comment on the internet. That is when trouble in this world begins.

* For all of us to be as gentle as rabbits – this year and beyond.

The Butcher | The Alex Gonzaga cake icing scandal: Most netizens only see the icing on the cake

The Butcher | Is there rigging in the selection of filmfest winners?

The Butcher | I know what you did last Christmas: A post-holiday showbiz report

The Butcher | Showbiz in 2022: The state of Philippine cinema

The Butcher | Showbiz in 2022: The only TV shows that prop up local television