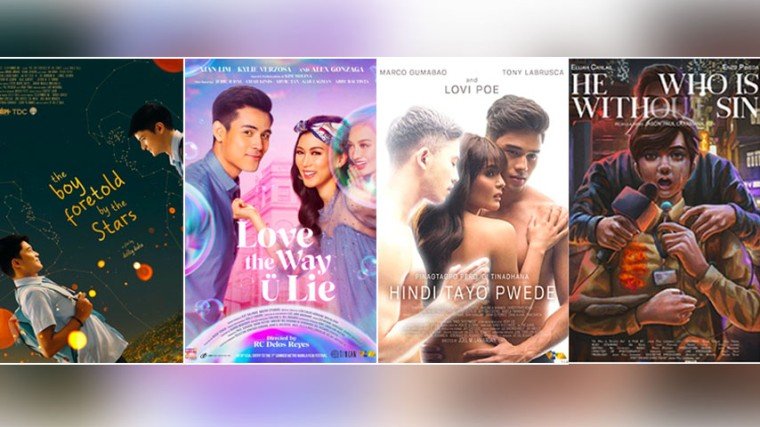 This is the concluding portion of The Butcher’s mini review series:

THE BOY FORETOLD BY THE STARS

This film came like a breath of fresh air when it was included as one of the entries in the 2020 Metro Manila Film Festival where it won 2nd Best Picture.

But the fact that it only placed second best (to Fan Girl) in a film festival with really horrible entries is an indication that it is not all that outstanding. It truly is not.

It was a refreshing treat at that time though – as the first full-length Filipino Boys Love (BL) movie. It was new and untried. This explains why it got a lot of positive reviews.

The Boy Foretold also comes across as genuine and sincere. It should be - since the material is supposed to be based on true-to-life accounts: Two boys in an all-male Catholic school falling in love.

The setup in an all-boys school is said to be conducive to gay romance since teenage males with raging hormones only have each other. Why, it is supposedly even an accepted, but unspoken practice in some Catholic junior seminaries.

The director, Dolly Dulu, a transgender, must have had a wealth of material to work around with while filming The Boy Foretold. The production also had the advantage of shooting and getting completed right before the lock-down.

Unfortunately, this filmmaker still has to learn how to properly assemble all the elements of a motion picture. It is quite unpolished.

Of course, for a first-time director, her product is not totally all that bad. The production is also lucky to have two fresh and unspoiled actors – Adrian Lindayag and Keann Johnson - whose combined raw talent is the most potent armament used by the film to charm the audience.

The Boy Foretold, sadly, moves in such a slow pace that it makes the vaccine roll-out in the Philippines look like a 100 meter dash winner. It truly becomes boring in most parts.

The film also has the tendency to take the rom-com route. It’s like Star Cinema goes gay.

Overall, The Boy Foretold by the Stars as a film cannot be declared as one of the year’s finest. But it certainly is one of the most charming.

LOVE THE WAY U LIE

Alex Gonzaga is to the internet born. Not exactly a smashing success in mainstream entertainment, she is now a YouTube superstar. Even her Love the Way U Lie film became No. 1 when it was uploaded on Netflix.

Alex co-stars here with Xian Lim, whose wife in the story, Kylie Verzosa, dies tragically after getting hit by a jeepney right beside Quiapo Church. Alex then becomes the medium for Kylie to be able to connect to Xian.

It’s shamelessly Ghost, okay, but it’s fun. Trust Alex, who must have been fed with Red Bull as an infant instead of breast milk or formula, to deliver all the energy this romance comedy requires. She also gets help from Xian in keeping this very light film afloat.

Kylie is also quite effective in the film and is very comfortable before the camera. She is perfect for the part given to her. As the ghost, she is hauntingly divine.

Gerald Anderson’s ghosting of Bea Alonzo must have affected a lot of filmmakers because quite a number of movies produced last year was about ghosts. Of course, Anderson’s ghosting didn’t have anything to do with the supernatural, but that sure must have been one hell of an experience for Alonzo.

Like Love the Way U Lie, Hindi Tayo Pwede is also about a ghost. In the story, Lovi Poe and Marco Gumabao are best friends. He is secretly in love with her, but doesn’t make any move until it’s too late: Tony Labrusca has already entered the picture.

Tony dies eventually, but remains a hindrance for Marco. Labrusca stays on as a ghost but he is only visible to Lovi. As a result, Lovi cannot have a romance with anyone else because Tony is still earth-bound and living with her in her apartment.

Labrusca is one pretty powerless ghost. He cannot move objects and even has to hitch a ride with Lovi. Strangely enough, he is able to open the car door in one scene that must have been overlooked by the director.

Hindi Tayo Pwede has its flaws. But one need not take it seriously. Enjoy it in the spirit of fun. Or shall we say, the ghost of fun?

HE WHO IS WITHOUT SIN

This film has a rather rough texture to it. But that may be a message it wants to send: That the world of news and public affairs shouldn’t really be all about gloss and polish. However, that’s all we get from the current news programs being aired on television today.

He Who is Without Sin tells the story of a high-profile news and public affairs journalist (Enzo Pineda) who uses his media persona to blind an impressionable wannabe reporter (Elijah Canlas) into sexual submission. It was released only months after Sara Balabagan finally came forward to confirm the rumor about how she had a sexual relationship when she was a minor with esteemed broadcaster Arnold Clavio that resulted in an offspring between them. Clavio got nary a slap on the wrist for that.

Compared to movie stars who are allowed to sin (and later be forgiven), newscasters have to walk on eggshells. They are expected to be up to their neck with moral values and principles.

In fact, newscasters are even discouraged from endorsing consumer products (Clavio was allowed to sell coffee though). This is in line with the mostly hypocritical slogans of some news and public programs used by local networks: “Impartial.” “The most trusted.” Please excuse the viewers. A lot of them want to puke.

Building up the image of news people as infallible is not exactly unique in Philippine setting. American TV also has its own set of news anchors who can do no wrong.

He Who is Without Sin tries to bust this myth and succeeds. It is also successful at transforming Enzo Pineda from a teen idol to that of a serious actor. The StarStruck alumnus earlier showed impressive acting skills via Bar Boys (2017). In He Who is Without Sin, he should be a best actor front-runner.

In the case of Elijah Canlas, he no longer comes as a surprise. He already won the Urian best actor trophy last year for Kalel, 15.

He Who is Without Sin is a relatively small film. But it is important and socially-relevant. It opens the eyes of the young and warns them to carefully choose the people they should idolize.

The people they see on TV shouldn’t really be their best bet. They, too, have feet of clay like anyone else.

The Butcher | Why GMA talents move to ABS-CBN