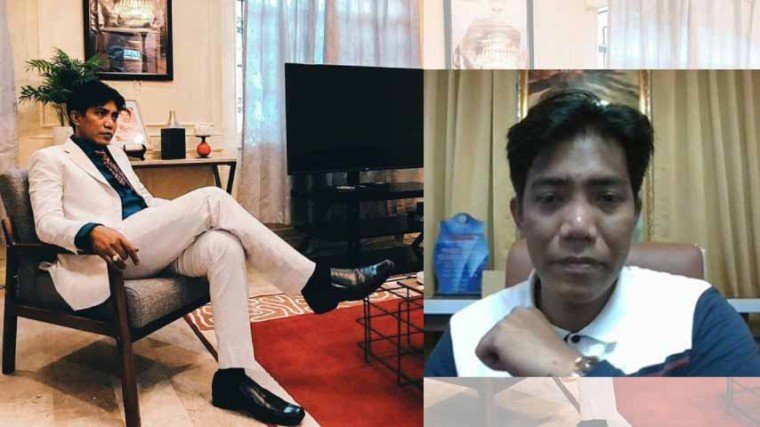 Who exactly is Francis Leo Marcos? Searching online would yield results about him being a relative of the late President Ferdinand Marcos. He is also said to be so rich, he is worth between $25-30-M. Soon enough, however, a lot of detractors came forward online to unmask and discredit him. A John Robert Pelayo said that his real name is Norman Mangusin and is no way related to the Marcoses, heirs of the dictator. In fact, Imelda was supposed to have sent a letter to the NBI last year complaining about Mangusin, who reportedly claims to be the custodian of the Marcos wealth.

To the simple-minded, being rich is just a matter of having a lot of money. But among the moneyed, wealth has its many layers and class distinctions: the revered old money and the despised nouveau riche.

Sometime around April Fool’s Day, what initially looked like a joke began to stimulate the interest of most social media users. It all started when a certain Francis Leo Marcos launched what he called the mayaman challenge.

Supposedly – he knocked at every door in his Green Meadows subdivision to  encourage his rich neighbors to get out of their respective homes and comfort zone and help the poor and the needy in this time of COVID-19.

His intentions may be good, but there was something wrong with the way he had planned to implement his challenge to the rich. From Day 1 of the lock-down, everyone had been instructed to stay home – which is what this home quarantine is all about in the first place. So what was he doing trying to smoke people out of their residences?

Shouldn’t the NBI be summoning him instead of Pasig City Mayor Vico Sotto?

It is said that this person was provoked to take action in his neighborhood after the subdivision refused the entry of a truck that contained sacks and sacks of rice he was going to distribute in the depressed areas of Metro Manila.

Green Meadows’ current policy of not letting non-residents into the subdivision is not a simple a matter of keeping undesirables out. For all we know, the subdivision may have residents who are COVID-19 positive or perhaps under investigation and village officials surely would not want the virus to spread some more among outsiders.

The residents of Green Meadows are also said to be doing their own charity work, except that unlike Francis Leo Marcos, they are not making their fund-raising drive known to the public. The truth is, most gated enclaves already have charity cases within the village: the security guards and admin workers, who cannot even go home anymore – given the restricted movement within the metropolis and even in the provinces.

Another one of Marcos’ reprehensible actions may be viewed on YouTube. Enjoying his instant popularity, he is very receptive to people who want to take selfies with him. In one instance, he even urged a new-found fan to remove -  horrors – the mask that served as the only protection between them. He risked another person’s life and even his own just to feed his ego. No, Marcos is never seen wearing a mask in any of his recent video posts.

Searching online would yield results about him being a relative of the late President Ferdinand Marcos. He is also said to be so rich, he is worth between $25-30-M.

Soon enough, however, a lot of detractors came forward online to unmask and discredit him. A John Robert Pelayo said that his real name is Norman Mangusin and is no way related to the Marcoses, heirs of the dictator. In fact, Imelda was supposed to have sent a letter to the NBI last year complaining about Mangusin, who reportedly claims to be the custodian of the Marcos wealth.

With this unmasking, Francis Leo Marcos was forced in succeeding blogs to admit that he really isn’t a Marcos, but was only inspired by their success (of all the people to idolize, it had to be them).

Pelayo also insists that Mangusin (he will be referred to in this piece from hereon as that) only serves as front to a Chinese businessman, who uses him to be able to rent three mansions in Green Meadows. The Chinese is also said to be engaged in dubious activities. Why, even Mangusin himself – according to Pelayo – was once convicted of estafa.

But is he actually rich? Maybe. For sure though – whatever wealth he has is definitely new money.

To begin with, the truly wealthy would try to keep it down for two reasons: to protect his life and to escape tax collectors. But trust him to flaunt everything he owns in this world for everyone to see.

According to his bio – posted online – he studied at the National High School of Massachusetts and, later, at the Massachusetts Institute of Technology. But the minute he opens his mouth, you wonder if he has ever been to Massachusetts – or if he even knows where it is.

Also, Massachusetts is not a nation, but a state – so how can there be a National High School of Massachusetts?

Perhaps he should refrain from talking because that gives away everything about him. In his vlogs, he speaks mostly in the vernacular. But in whatever language, a person’s background would always drip from the sides of his mouth.

After popping a strong dose of Advil, you eventually make sense of what he was trying to say. But you don’t even necessarily agree with what he said because that is not even true. He also contradicts himself by talking too much.

There is also something suspicious about what seems like orchestrated paeans posted online about him. All these have one common denominator – atrocious grammar and bad writing.  Also suspect is a vlog calling him humbug in the beginning but eventually turns around and starts citing his holy virtues.

Another vlogger he seems to have crossed in the past, however, cautions netizens not to believe everything positive said about Mangusin hook, line, and sinker. A stern warning he gave them was: Do they even know where Mangusin got the money that was used to buy all those sacks of rice he gave away?

Behind any immense wealth is a great crime. Look at all those big retailers who eventually became philanthropists. Was that to make up for introducing this very unfair practice of “endo”?

Nobody knows how Mangusin amassed all that wealth. Did he step on people on his way to financial success? The recipients of his donations don’t care. A hungry stomach is hardly discerning.

Another vlogger who is discrediting him is Xian Gaza – yes, he was the one who put up a billboard inviting Erich Gonzales to have a coffee date with him. Gaza confirmed that Mangusin indeed had faked his birth certificate to elude the law.  Later, he also got a bogus passport issued to him, but using yet another fictitious name.

Gaza also said that Mangusin was once an OFW, which he should be proud of. By the way, Gaza, who tagged Mangusin as a partner in crime in one scam, had also been convicted for estafa, but for a different case.

What is troubling about Magusin’s sudden popularity in social media is the way most netizens had been lionizing him. His having donated sacks and sacks of rice to the hungry surely is a very good thing – bless him. But the end doesn’t justify the means.

At this point of his game, it’s not even important for him to come clean and reveal his true origins. Maybe all he has to do is shut up and continue performing his good deeds, which is very much appreciated.

How should he be judged? Now is not the time to pass judgment. Besides, in the middle of the COVID-19 crisis the world is facing at the moment, it’s hard to distinguish the hero from the heel.