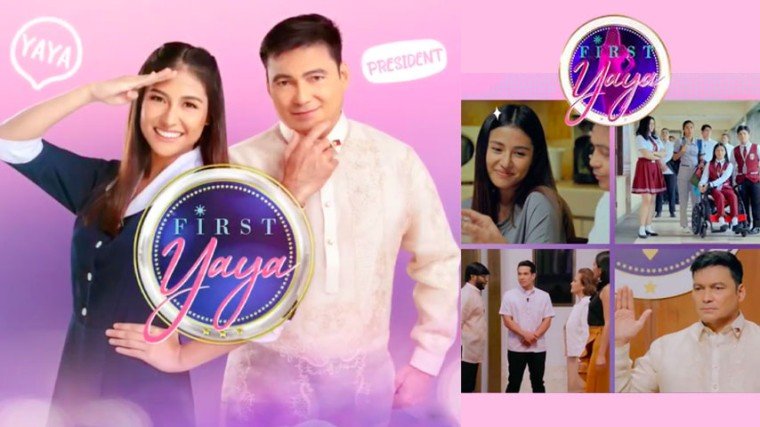 The story of First Yaya can actually be turned into something relevant and useful to society. It has the opportunity to open the eyes of the Filipino people on how to finally, finally choose the right leaders of this nation, especially since the next presidential race is only a year away.

Starting from the mid-1960s, several generations of kids were introduced to the magic of cinema via The Sound of Music. This 1965 Oscar best picture winner was actually a screen adaptation of the hit Broadway musical that, in turn, was inspired by the 1956 German film, The Trapp Family.

Of course, everything began with the memoirs of Maria von Trapp called The Story of the Trapp Family that was published in 1949. Surely, everyone knows Maria’s story: A young novice goes to work as the governess of the Von Trapp children and ends up marrying their baron father. Countless materials had already mined this plot since then. A personal favorite is the American sitcom The Nanny that ran from 1993 to 1999.

In the Philippines, the first to adapt this material (minus the Nazi angle, of course) was the komiks series Wanted: Perfect Mother. That eventually became Lino Brocka’s directorial debut. This was also the film that catapulted Snooky Serna into child superstardom.

Produced by Lea Productions, it proved to be a box office winner in the 1970 Manila Film Festival. The movie also gave Dante Rivero his first acting award (filmfest best actor). In1996, Viva Films did a remake of Wanted: Perfect Mother as a vehicle for Regine Velasquez.

In more recent years, it was television that began to capitalize on the material of The Sound of Music. There was the long-running morning series Be Careful With My Heart with Jodi Sta. Maria and Richard Yap on ABS-CBN.

This time around, it is GMA’s turn to have its own version of The Sound of Music. Last March 15, it launched the pilot episode of First Yaya, one of the network’s projects that got delayed – no thanks to the pandemic.

First Yaya was supposed to have Marian Rivera in the title role, except that she didn’t want to commit to locked-in shoots given the fact that she is a mother of two very young children, who still need so much of her attention. She is also playing it safe since locked-in tapings are not exactly one hundred per cent guaranteed to be COVID-19 free.

Taking over this very important role is one of GMA’s loveliest actresses, Sanya Lopez, who has previously proven her worth in the network’s successful soap Haplos. She is a very good replacement because she has all the energy required by the role as a young woman who will do anything to keep her job as the nanny of the children of widowed Vice President Gabby Concepcion.

Yes, it is The Sound of Music all over again, but set in the ugly world of Philippine politics. But the plot is the same: A young and vivacious household staff falling in love with the widowed boss, who eventually makes her the new mother of his orphaned children. No wedding has taken place yet, but you bet that is where it will end.

First Yaya begins with Sanya working as an OFW who has to feed a family of ingrates. Her sister, for instance, steals her boyfriend while she is doing backbreaking work abroad. Her mother, Sandy Andolong, on the other hand, loves sending her away to work in foreign lands where there is more opportunity to earn double, if not triple.

Sanya’s only true ally at home is her father, Boboy Garovillo, who even has to die – although he is allowed to return as a semi-comical ghost, maybe in the hope it would add the humor that is so badly needed in this show. It is after her father’s death that Sanya gets employed in the home of the Vice President.

First Yaya is directed by LA Madridejos, who also handled Alden Richards’ The Gift. As a director, perhaps Madridejos is the type who doesn’t give his all in the beginning of a series.

That was the problem with The Gift at the start of its run in 2019.  It was so slow that it was painful to watch. Thankfully, Madrilejos decided to speed up the show’s pacing and in time came up with a winner of a soap.

The same scenario is repeated in First Yaya. The first few episodes of First Yaya were truly like the first crawl of a child – slow and difficult.

Sanya’s early scenes with her family were all designed to warm the cockles of the heart. But everything turned out to be so saccharine – so annoyingly sweet that people who watched it just wanted to turn off the set and vomit. Imagine contrived family bonding moments long retired by Star Cinema still being milked dry here in First Yaya.

By heaven’s grace, the program’s story is now progressing, especially with the introduction of Boots Anson-Rodrigo, who plays the President of the Republic of the Philippines. Too bad, she dies at once in the story and Gabby takes her place as the leader of the land.

One quarrel I still have with the show, however, is how it plots the script to manipulate viewers’ emotions. Of course, that is done all in the name of ratings. But can they please be a little bit more subtle?

All the characters in the series are black and white. All the bad people are wicked to the core. The nice ones, meanwhile, are all cloyingly sweet they make the viewers sick.

And I thought cardboard characters had already vanished in this new millennium. Look – this is 2021, more than a century after the Spanish flu and yet bad guy Gardo Versoza still lets out a sinister laugh in one of his scenes. Is he camping it? Well, epic fail. Acting lessons from Jaclyn Jose on the art of camp are in order.

The story of First Yaya can actually be turned into something relevant and useful to society. It has the opportunity to open the eyes of the Filipino people on how to finally, finally choose the right leaders of this nation, especially since the next presidential race is only a year away.

The late Ramon Mitra tried but failed in the 1992 presidential race. Jose de Venecia also ran for president in 1998, but it was Joseph Estrada who got elected to the highest position in the country. Who’s next?

Oh, is that Alan Peter Cayetano running an ad a year away from the campaign period for the 2022 elections? Here’s wishing him the best of luck.

Of course, Gardo will never be allowed by the show’s creators to succeed even with his evil machinations. If he does, it is still Gabby who will have the last laugh in the end.

The program has lately been showing scenes of dirty political tactics employed by some of the villains in the series. But the more discriminating viewer may want to see if the show is courageous enough to give clues here and there on which political personalities had been robbing this country blind.

Maybe the writers won’t go to that extent because at the moment the show is  so focused on building up the sweet moments between Sanya and Gabby. Well, this is a soap. And so, expect everything to be joyful and saccharine as usual in the end. Most likely, it will stick to The Sound of Music formula: overly sentimental and mushy.

The Sound of Music leading man, Christopher Plummer, actually hated this film – yes, his very own film. He found it too sweet and pulpy that he called it The Sound of Mucus. The way First Yaya’s story line is unfolding, I’m inclined to call it the same.