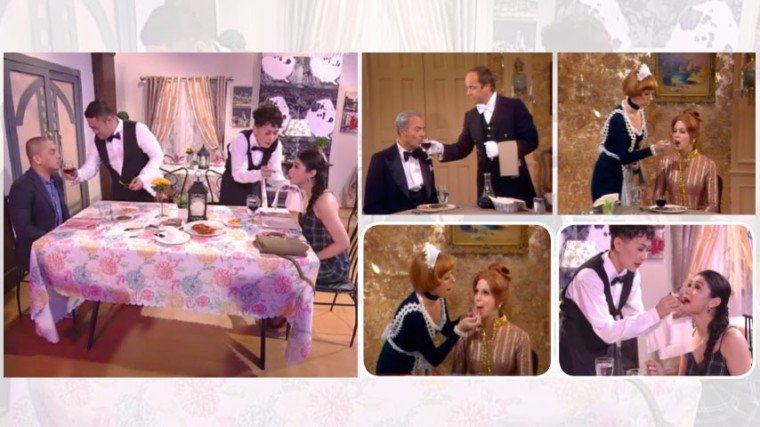 It’s difficult to make accusations, however, because everything could just have been a coincidence. The great Dolphy, after all, once said that comedy revolves only around a certain number of situations. But that Carol Burnett sketch is on YouTube. Maybe you can search it and make your own assumptions.

’Yan ang Misis Ko was a 1970s sitcom that was funny, yet effective in espousing family values. Originally aired over Channel 13, it starred Rosa Rosal and the late Ronald Remy as a happily-married couple. They had three daughters in the series played by Cristina Reyes (the sister of Efren Reyes, Jr.), Connie Angeles (who would later become Quezon City vice mayor) and the child star Jingle, who was said to have become a doctor in her adult life.

The household maintained a helper, played by Nena Perez-Rubio, who was treated like family. From time to time, however, she would get into trouble - like when she pretended to be the mistress of the house, for example. By the way, she was Spanish-speaking, which wasn’t strange because up to that time, there were still helpers who had to be fluent in the Castilian tongue to better communicate with their affluent employers.

Nena, although generally efficient, had a lot of quirks. One time, she complained about having to do so much housework. Since the family basically indulged her, another help was hired to lighten her workload.

The new helper was not the typical Filipino chimay – as derided in practically all local sitcoms. The term chimay, by the way, had just been coined around that time. It was a period when political correctness was but all absent in the world.

No, this new helper was not Matutina. Neither was she Vangie Labalan nor Flora Gasser-like.

Instead, she was beautiful as beautiful can be and stood regally at 5’8” The actress who played her was Aurora Pijuan, 1970 Miss International.

Aurora married sportsman Tommy Manotoc (yes, he would later father Imee Marcos’ three boys) the day after she turned over her crown in Long Beach. Sometime in 1973, she returned to the spotlight by trying her luck in showbiz.

Initially, Luis Nepomuceno was supposed to launch her in a heavy drama called Mga Rosas sa Putikan. When that project was shelved, she did two other movies: Si Popeye Atbp. as Olive to Ariel Ureta’s Popeye and, later, in Sunugin ang Samar where she played a mute.

It was in 1974 when Aurora Pijuan accepted this guest role as a helper in ’Yan ang Misis Ko.  In the story, the family was, of course, surprised when a woman of beauty pageant standards applied for the position of housemaid. But they took her in and were very happy with her efficiency.

But at 6 p.m., she would slip into an evening dress and leave for cocktails. For her Sunday day-off, she’d go water-skiing.

As it later turned out, she was actually a young society matron tired of her husband’s whining about her not being able to perform housewifely chores. She took in that helper position to prove to him that she was capable of doing housework. That ’Yan ang Misis Ko episode turned out to be one of the series’ most memorable editions.

In 1989, an episode of Family Ties (with Michael J. Fox) that was aired on RPN-9 featured as guest star Oscar winner Geena Davis. Do you know what role she played in that episode? She was cast as a rich woman whose husband was unhappy with the way she ran their house. To prove him wrong, she applied as a housekeeper at the home of Michael J. Fox’s family.

It’s difficult to accuse Family Ties of copying the plot of that 1974 episode of ’Yan ang Misis Ko given the poor archiving system in the Philippines. And Betamax didn’t come to the market until a few years later.

Oh, but I felt proud as a Filipino that time. Imagine a Filipino TV show beating an American series to that concept. And it wasn’t just any US television program. It headlined the Michael J. Fox – the star of Back to the Future.

But back to the past: In 1975, the old BBC-2 started airing The Carol Burnett Show on primetime. One of the episodes there had Harvey Korman and Vicki Lawrence playing a rich couple who had a butler (Tim Conway) and a maid (Carol Burnett) at their disposal.

They were super senorito and senorita. At the dinner table, they would just sit down there – with the butler and maid spoon-feeding them. Why, during the meal, the maid even reapplied lipstick on her mistress.

At one point the couple got into an argument that turned violent. But they wouldn’t even bother to get up to inflict harm on each other. Instead, the butler and the maid punched each other on their behalf. That was truly one of the funniest and most innovative sketches ever featured in The Carol Burnett Show.

Last June 5, there was also a hilarious segment in Bubble Gang (must have been a replay). It featured Archie Alemania and guest star Carla Abellana as diners in a restaurant where patrons were pampered to the extreme. Yes, the customers were also spoon-fed there. Later, the waitress, Chariz Solomon, also reapplied lipstick on Carla after the meal.

The humor there was very effective because the performers gave their all. But unlike in 1989 when my soul burst with pride over the discovery that Family Ties aired a segment that had already been done by ’Yan ang Misis Ko, what I felt this time was shame.

As a Filipino, I felt so ashamed by this shameless lack of originality on the part of Pinoy content creators. I wanted to cry piracy – of ideas, that is.

It’s difficult to make accusations, however, because everything could just have been a coincidence. The great Dolphy, after all, once said that comedy revolves only around a certain number of situations. But that Carol Burnett sketch is on YouTube.  Maybe you can search it and make your own assumptions.

I’ve always tried to catch Bubble Gang – practically from the time the renegade group broke away from the original show Tropang Trumpo on Channel 5. I only stopped watching regularly when the program once churned out an entire episode making fun of rape and how it could be a pleasurable experience. But guess which network howled the loudest in protest when Vice Ganda later made a joke about Jessica Soho and rape?

Since I no longer get to watch that much of Bubble Gang, I cannot say if most of the ideas used for its sketches are original or perhaps borrowed from classic American sitcoms.

Bubble Gang is turning 25 this year. It takes pride in its achievements – having been crowned best gag show many times over in the annual Star Awards for Television. Never mind if most of its jokes make fun of physical imperfections and are sexist in nature.

If you ask me, an outstanding comedy show should be funny, original and subscribe to political correctness as much as possible. Unfortunately, not all these elements are present in most episodes of Bubble Gang.

Sorry to burst your bubble.