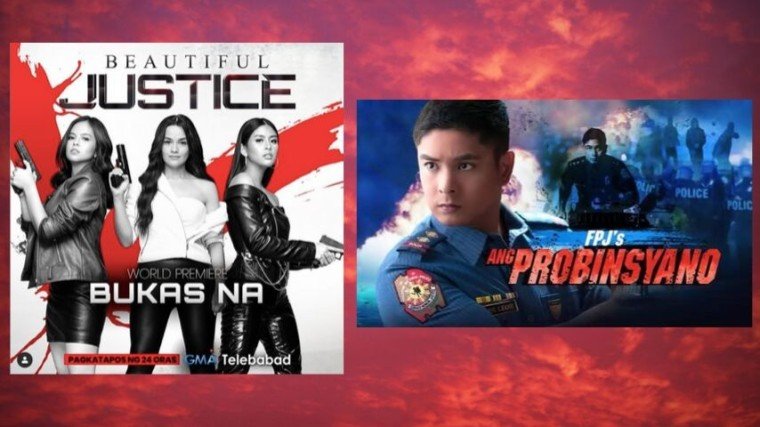 In lieu of a charismatic male action star like Coco Martin, which the GMA stable clearly doesn’t have, the next best option is to put three women – just like Charlie’s Angels. This is really going to be one tough battle for GMA since Ang Probinsyano is the sturdiest of all local shows today on television. It’s going to be like David and Goliath, except that David is in stilettos while fighting a leather jacket-clad Goliath.

One week after its pilot episode last September 9, Beautiful Justice has finally laid out its plot. The main characters had also been introduced to the viewers – at least, to the non-Ang Probinsyano loyalists.

The first telecast starts with an explosion on a yacht and this kills some members of the Philippine Drug Enforcement Agency (PDEA). The episode then goes back 36 hours earlier so that the viewers get to meet those left behind by the PDEA agents who died in that tragic yacht incident.

And so we see Alice Vida (Yasmien Kurdi), who is married to Ronnie (Gab Eigenmann), one of the senior PDEA agents. There’s also social media influencer Brie Cuevas (Gabbi Garcia) who had just gotten engaged to Lance Decena (Derrick Monasterio). He secretly works for the PDEA.

The spunkiest among them is Kitkat Bernardo (Bea Binene), a beauty parlor assistant whose brother, once a drug peddler, had recently been recruited to join PDEA as an asset. Tough luck for this brother – he dies in his first secret mission.

All grieving for the loss of their loved ones, the three women band together to find out what truly happened during that explosion – and who is behind it.

A fourth person also joins them – gay man Kyle Balagtas (Kevin Santos), who mourns the death of PDEA agent Adam Balagtas (Carlos Agassi), who is supposed to be his lover. Agassi, of course, is his usual driftwood self. When his body lays there after getting killed, there really is not much difference from the time he was alive.

Too bad, Kyle dies by the series’ second week. Actually, it is in the second week of Beautiful Justice where everything shapes up. Unlike in the earlier episodes where the viewer is always one step ahead of the story, the tele-serye finally becomes unpredictable and exciting by Week 2.

Bea Binene also becomes less annoying here. As her way of compensating for her pint size, she resorts to over-the-top acting in the initial episodes of the program. She is so loud that you want to squeeze her like you’d do with a bug.

Thankfully, she eventually practices restraint and her scenes with Gabbi Garcia these days are fun to watch (she’s poor, while Gabbi is rich and fashionable).

Gabbi, from her end, is still figuring out what to do with her character. She can’t be blamed for this because in the story, Derrick Monasterio as Lance was supposed to be in the yacht when it explodes, except that his body is missing. Gabbi, therefore, has to romance another PDEA agent, Vin Ocampo (Gil Cuerva) – so everything, the development of her character included, is hanging in the air.

Is Lance dead in the story? Maybe not – because the picture of Derrick Monasterio prominently appears in the poster. A word of caution though to the creators of Beautiful Justice: Derrick’s return should be able to top or at least equal the comeback of the Camilla character played by Maja Salvador in The Killer Bride.

As it is, there is already a loophole with the way Lance’s character is written. How come Gabbi”s Brie is the only one interested in what happened to him? Doesn’t he have parents or siblings?

Even if Lance’s loved ones appear later in the succeeding episodes, that would be too late – unless it is eventually revealed that his entire clan was earlier shipped to Jupiter where there is no internet.

As expected, Yasmien Kurdi delivers the best performance among the three lead stars of Beautiful Justice. Her acting is very tempered and she already has a grip on her character. The scenes featuring her and her caricature of a mother-in-law only become tolerable because she’s able to rise above such ludicrous scenarios.

It’s really a pity that her husband in the series, Gab Eigenmann as Ronnie, dies early in the story because they have this wonderful chemistry between them. She and Gab give the most outstanding performances in Beautiful Justice.

But to be fair to the other members of the cast and even those behind the camera, everyone seems to be giving their best effort to make the show succeed. The result is an exciting action-drama series that has quite a number of suspenseful moments.

The director, Mark Reyes, only has to learn how to shorten some of the chase scenes – like the one involving Kyle and Ping Medina as one of the henchmen of Valeen Montenegro as the syndicate queen Lady M. The escape and ensuing chase scene begins at a warehouse and continues all the way to one of the streets of Metro Manila. It is so overextended that at one point, the viewer no longer cares if Kyle is finished off, especially in those hide-and-seek sequences.

Over-all, however, Beautiful Justice is sleek and, in fact, even glossier than rival Ang Probinsyano, which thrives in its having rough edges (the better to identify with the mass viewers).

Beautiful Justice is obviously being produced by GMA in a grand manner to topple the now-legendary Ang Probinsyano on ABS-CBN – or, at least, snatch a chunk of its viewers.

Since Ang Probinsyano is an action series, the GMA creative people must have thought: Why not fight the opponent in its own game? Maybe they should also put up a show packed with action scenes.

In lieu of a charismatic male action star like Coco Martin, which the GMA stable clearly doesn’t have, the next best option is to put three women – just like Charlie’s Angels.

This is really going to be one tough battle for GMA since Ang Probinsyano is the sturdiest of all local shows today on television. It’s going to be like David and Goliath, except that David is in stilettos while fighting a leather jacket-clad Goliath.

Ang Probinsyano has the Philippine National Police (PNP) as part of its milieu. Beautiful Justice therefore has to have its story revolve around the operations of PDEA so that it doesn’t look like a copycat. Drugs are so much in the news these days anyway.

Unfortunately, Beautiful Justice gets practically only half of what Ang Probinsyano scores in the ratings game. Is GMA really serious in fighting Ang Pobinsyano head-on?  It must be – because Beautiful Justice looks like a very expensive production.