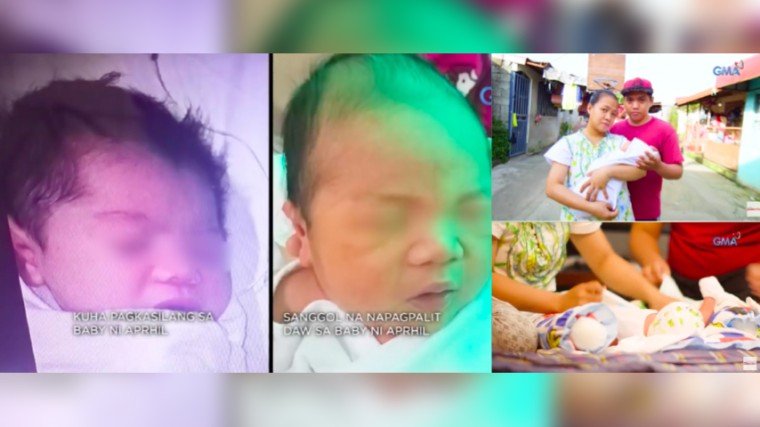 The two families involved in this most recent baby-switch may be breathing a sigh of relief now that the issue had been resolved. But there may be some challenges ahead waiting for them as they raise their respective kids. At this point, it is impossible for this incredible baby-switching story not be repeated since it will stay permanently on the internet. Family, relatives and friends should be very sensitive about making jokes regarding baby-switching, especially around the people concerned.

When I came to this world, I was considered to be the afterthought child. I have three older siblings who were born in succession. In my case, there was quite a gap in years between me and the brother who came before me.

Guests who came to visit the house days after my mother and I were discharged from the maternity ward wondered why my skin was very fair. They totally forgot that my father was also quite fair – that was until he took up tennis and decided to sport a George Hamilton tan.

Everyone was also surprised why I turned out to be Chinese-looking – disregarding the fact that we have roots in Amoy in China on my mother’s side. But for some strange reason, I was the only one among that generation of cousins with chinky eyes.

This was my sister’s tale: When our mother gave birth to me, she shared the delivery room with some Chinese woman. My sister and two brothers insisted that the switching happened there. That always led to my throwing tantrums as a kid.

Until recently, they would still rib me about how I was switched at birth. But this time, I would tell them that I am actually a Gokongwei. Or that Henry Sy was my real father – half-wishing there was truth to it so that I could lay my hands on the SM malls.

Of course, I could afford to laugh at that now. But I begin to shudder just recalling a true baby-switching incident that involved a cousin of mine. I am sharing this story with you, but I have to change the names of the characters involved because I am not sure if they will be comfortable about the family’s private affairs being discussed in public.

The story begins in the late 1960s when my aunt Gilda married Gerry Javier, an architect. Gilda gave birth to a boy one year and five months after they were wed. They named the first-born Gary.

One year later, Gilda got pregnant again and when she gave birth, the baby turned out to be another boy. Although they had hoped for a girl, they were still happy with the arrival of a new family member.

Gilda actually gave birth in a hospital that was affiliated to a medical school in the university belt in Manila. That was also where she delivered Gary previously.

On the day she and the baby were discharged from the hospital, they merrily went back to their house in Quezon City with Gerry driving for them. They had planned to linger in the ground floor with the new baby to allow Gilda to have a decent meal after days of hospital food. That was where they had planned to introduce baby brother to older sibling Gary, who was still napping while cradled by a nursemaid.

The new baby, however, soiled his diapers (this was before Pampers) and the nursemaid volunteered to change the infant in the nursery upstairs. She can put Gary down for a bit since he was sleeping soundly.

For some reason, Gerry decided to change the baby himself. That was going to be their first bonding.

Before Gerry put the baby down in his crib, he decided to smother his new child with kisses – as any excited and loving father would have done. The excitement, however, turned to anxiety when he removed the baby’s diapers: the boy was circumcised.

He called out downstairs to Gilda to ask if somewhere along the way, she had the baby circumcised. Of course not! They would have decided on that as couple, pointed out Gilda.

Gerry took one good look at the infant to check him out. That was the first time he was seeing the baby’s face up close because in those days, a newborn infant was not usually brought out of the nursery until it was time to leave the hospital with the parents. The only times Gerry would see the baby was through a glass partition.

It was at that point when Gerry checked out the baby’s tag. It said: Baby Morato. That sent shivers up the spine of Gerry JAVIER. After changing the diaper, he bundled up the baby and drove straight to the hospital with the nursemaid. Gilda was too weak to return to the hospital and could only cry at home while waiting for the truth to be uncovered about the baby they brought home – obviously by mistake.

Back at the hospital, the nurses panicked and searched the nursery for Baby Javier. They merely apologized for handing the couple the wrong baby. I don’t know why Gerry and Gilda did not bother to press charges against the hospital.

Maybe the people of that generation were more peace-loving and easily placated. Gerry just quietly brought the baby back home and turned him over to Gilda. They had him baptized Gavin, who is now a golden boy and looks like Gerry.

The two sets of parents involved in a recent baby-switching incident, however, are determined to sue a hospital in the province of Rizal. It is the latest top story of Kapuso Mo, Jessica Soho (KMJS). I will no longer furnish you with the details because it is all over YouTube.

Surely, those parents have every right to go to court if only for the mental anguish they went through during that period of anxiety.  It took five weeks before they got their respective babies back since they had to wait for the DNA test results.

Those two babies, however, have to be monitored constantly while growing up. According to Jessica Soho, counseling will be provided for both parties. But until when? Until the two infants grow up?

Thanks to that KMJS feature, I realized – although way too late – how some of our clan members handled quite insensitively the case of Gavin. The previous generation, of course, never cared much about political correctness.

You see, the older Gary grew up to be a successful corporate person – currently the vice president of one of the biggest companies in the country today. His marriage is intact and has well-mannered kids of his own.

Gavin, sadly, married in his teens and never bothered much with his education. He didn’t finish school and never had a real career. His marriage eventually broke up and had since been in and out of various relationships with different women.

This is such a pity because he was a delightful and obedient boy during the early years of his life. Did the running joke constantly cracked by relatives about his having been switched as a baby have any effect on him? Possibly so.

For the longest time, he was called Baby Morato. Although everyone found it funny, maybe he wasn’t amused. Looking back, it was cruel. Perhaps he didn’t feel any differently from kids who were teased about being “ampon” (adopted).

The two families involved in this most recent baby-switch may be breathing a sigh of relief now that the issue had been resolved. But there may be some challenges ahead waiting for them as they raise their respective kids.

At this point, it is impossible for this incredible baby-switching story not be repeated since it will stay permanently on the internet. Family, relatives and friends should therefore learn from Gavin’s case and be very sensitive about making jokes regarding baby-switching, especially around the people concerned.