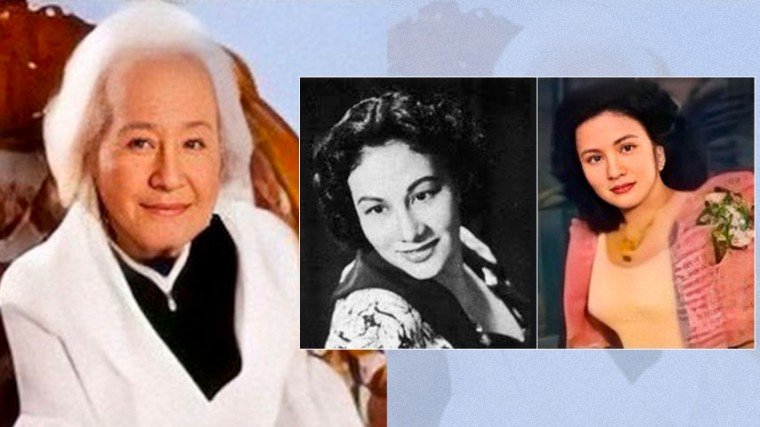 Anita Linda left this world last June 10 at age 95 as a truly accomplished screen artist. They say that life can be cruel. But it is also fair. Perhaps Anita Linda was made to live that long to enable her to savor all of her triumphs. Maybe it was to make up for all her tragedies in life.

From the late 1940s till the 1950s, Anita Linda was a popular leading lady who had her own fan base. Among those who swooned over her was Susan Roces.

Anita was actually the first movie star Susan ever saw in the flesh. Susan was just but a child then living with her family in a street called Batas in the Bacood area in Sta. Mesa.

One day, Premiere Productions used the neighborhood as a location site for one of its movies. When Susan heard that Anita was one of the stars in that shoot, she ran several blocks just to get a glimpse of the actress. Susan was not  at all disappointed.

“She was so beautiful, especially with her long hair,” recalls Susan, who no longer remembers the title of the film Anita was working on that time.

It certainly was not Sisa because Anita had an amusing anecdote about the time she was shooting for that Gerry de Leon classic. Susan was lucky because when she saw Anita in person, the actress was all dolled up and fashionably dressed.

But not in the movie Sisa where Anita played a deranged woman in most parts of the picture. Oh, how dismayed movie fans were with her that time, particularly those who took the trouble of visiting the set and expecting to see a glamorous film actress. “That’s an artista?” Anita heard all their comments.

Of course, Anita was never the type to complain about being stripped off glamour for a screen role.  She had always been praised for her professionalism  on the set. When shooting for Sawa sa Lumang Simboryo, in fact, Gerry de Leon, made her ride a saddle-less horse the whole day - to the point “na namaga ang p. . .ko.” Yes, her language was colorful.

Sadly, her movie career came crashing down when her movie company, Premiere Productions, stopped operations due to mounting labor issues. She even earned the ire of her producers after she sympathized with the studio hands in the middle of that labor dispute.

When it was time for her to shop around for another mother studio, most producers shunned her because they remembered how she mediated on behalf of the workers who went on strike. They didn’t want to have anything to do with an onscreen talent who would be on the side of union members in the event of a labor unrest.

Anita paid a steep price for sticking her head out on behalf of the little people in the film community. Movie offers became scarce after that and she was later forced to accept TV guest stints even if that was a huge step down from her former position as the queen of Premiere Productions.

For almost half a decade, she didn’t have any film project. But with the help of friends in the business – like Gloria Sevilla, who produced movies then – Anita started working in the motion picture industry again beginning in the early 1970s.

But it was Lino Brocka who made the name Anita Linda prestigious once more – via Hellow Soldier.

Hellow Soldier was one of the episodes in the 1974 Brocka trilogy Tatlo, Dalawa, Isa. Based on the play written by Paulinian Sister Angela Barrios, Hellow Soldier had earlier been presented in Balintataw – featuring Rosa Rosal and Loretta Marquez.

Set in the mid-1960s, Hellow Soldier is an intense mother-daughter drama that takes place in some squalid area in Manila. The mother becomes a drunkard after she is abandoned by her lover – a GI soldier who returns to the US to marry somebody else. That liaison produces a daughter who eventually seeks out her father as a way out of a hard life in the Philippines.

On the big screen, Anita was cast as the dipsomaniac mother, while Hilda Koronel played her ambitious daughter. It was that role that gave Anita the best supporting actress trophy in the 1974 FAMAS.

The FAMAS win may have brought her back in the game, but the weight of film roles given to her after that were all less than middling. In the 1975 fantasy/comedy Lorelei, which topbilled Miss Universe 2nd runner Johanna Raunio of Finland, Anita was made to play mother to Chiquito. The age difference between them: Less than eight years. But she couldn’t care less.

At that point, Anita was just too happy to be working again in the movies. The wounds of her tragic past also began to heal – although she still had to battle a lot of little fears brought about by previous pains.

She refused, for instance, to look at dead people in caskets. Even peanut butter she avoided – for fear that it was cancer-inducing. And then when she moved to an area that was prone to fires, she started a new ritual: At night, she always penciled her eyebrows just in case she had to run out into the street during a fire. “Kasi baka sabihin ng mga tao: ‘Ay, si Anita Linda pala, walang kilay!’”

As a precaution, she also had to constantly remind her housemates to always keep the gate closed - “at baka may makapasok...” It was a sentence she always left hanging – not wanting to be reminded again of her sister’s brutal murder.

The prospects of life, fortunately, began looking up for her beginning in the 1980s. Aside from movie projects, she was also included as a regular cast member in the popular daily soap Anna Liza, which assured her of a steady income.

In 1982, the Manunuri ng Pelikulang Pilipino gave Anita the Natatanging Gawad Urian. Sporting an embellished fuschia top over a long black skirt, she told the CCP audience: “No more tears.” It was a line she borrowed from a Johnson’s baby shampoo commercial

But tears – she still shed that evening. Talking to an adoring crowd gathered before her, she must have been reminded of her glorious past in the world of cinema.

The Manunuri truly valued her contributions to the local film industry with that lifetime achievement award. And it should be noted that she was the very first recipient of the Natatanging Gawad Urian for acting.

The Gawad Urian doesn’t give that award every year to actors. In the Urian’s 42 years, that honor had been bestowed to only 16 individuals in the acting arena.

In 1986, she received another Urian – best supporting actress for Takaw-Tukso. She was unable to attend the rites – having been tied up in a shoot that coincided with the awards night. But when she got home and received the news from family members who heard the announcement on television, “Ay, napatalon talaga ako.”

Her third and final Urian she got for Lola in 2009. It was for lead actress. The advent of indie movies in the new millennium put her back on top of the business. Starting with Adolf Alix, Jr.’s Adela, she played title roles again and even won awards both here and in international film circles.

Thankfully, she was able to relish all those accolades that came pouring in even very late in her life. Anita Linda left this world last June 10 at age 95 as a truly accomplished screen artist.

They say that life can be cruel. But it is also fair. Perhaps Anita Linda was made to live that long to enable her to savor all of her triumphs. Maybe it was to make up for all her tragedies in life.

You may also want to read: