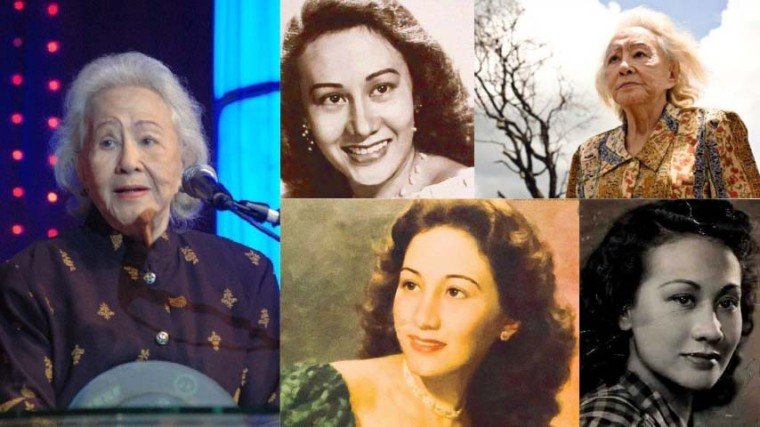 Shortly after she became an actress, she met and fell in love with Fred Cortes, an actor who starred in the first film version of Ibong Adarna. Also of American stock, he was Fred Louis Osborne in real life. They immediately got married, but the initial fruit of that union died during the last days of the war. As a mother, Anita grieved over that loss and compounding the pain was the difficulty of giving her dead child a decent Christian burial. It was Liberation and the Americans were fighting it out with the Japanese at the La Loma cemetery. In the middle of the night, while cradling her dead baby in her arms, Anita waited until it was safe to find a spot to bury her child.

During her career that spanned close to eight decades, Anita Linda played mostly agonizing women made to go through varying degrees of pain. Sadly – even in real life – she went through some of the most painful experiences ever inflicted on the human soul.

The early chapters of her life were generally rosy though. She was born Alice Lake on November 23, 1924 in Pasay – when it was still part of the province of Rizal. Her childhood, however, was spent in Pugad-Baboy in Polo, Bulacan. Among her neighbors there were the Santiagos, who later would become prominent in local entertainment.

Her father, James Lake, was a mining engineer of American descent, while her mother was the former Gorgonia Buenaflor of Iloilo. Since Gorgonia was Visayan, she loved hosting parties at their huge property in Pugad-Baboy.

This engineer’s young daughter was painfully shy though and would skip those lavish affairs by hiding among the fruit-bearing trees in the backyard. She would feast on yellowing guavas until the last guest had left their home.

For their education, the Lake kids went to Polo Elementary School and, later, at the Good Shepherd Convent High School. Life was peaceful for everyone – until the outbreak of the Pacific War.

During the Japanese Occupation, movie shoots had to stop since there were no film rolls available in the local market. As a career alternative, movie actors trooped to the stage and performed in as many as three shows a day in the very same theaters that exhibited their films before the war came to the Philippines.

At the Avenue Theater one day, matinee idol Leopoldo Salcedo noticed how the comic Lopito couldn’t focus on his lines. Leopoldo looked for the source of his co-actor’s distraction and quickly found it – actually her – in the audience.

Seated near the stage was a very pretty girl in her late teens. Leopoldo requested that the spotlight be focused on this young woman whose lovely face was framed by a red bandana.

Called backstage after the show, the girl – who would eventually be called Anita Linda – was offered to join show business. Although still very shy, she agreed to work in entertainment if only to help contribute to the family’s dwindling finances after the Japanese had confiscated their properties.

Shortly after she became an actress, she met and fell in love with Fred Cortes, an actor who starred in the first film version of Ibong Adarna. Also of American stock, he was Fred Louis Osborne in real life.

They immediately got married, but the initial fruit of that union died during the last days of the war. As a mother, Anita grieved over that loss and compounding the pain was the difficulty of giving her dead child a decent Christian burial.

It was Liberation and the Americans were fighting it out with the Japanese at the La Loma cemetery. In the middle of the night, while cradling her dead baby in her arms, Anita waited until it was safe to find a spot to bury her child.

After the war, Fred convinced Anita to migrate to the US where he had relatives. Their US stint was not exactly the realization of Fred’s American Dream. It was actually a nightmare for both of them, especially since they hardly had money there.

One time, Anita was invited by Fred’s family to watch a movie at a nearby theater. She readily agreed since that was going to break the monotony of her destitute life in America. As they filed toward the cinema entrance, she was stopped. No one bothered to buy her a movie ticket and she had no money to pay for it. Anita was turned away - to her extreme embarrassment.

When she got pregnant again, there was the matter of where she was going to give birth. A private hospital was out of the question since they didn’t have the funds for that. Anita could be accommodated in a military hospital – but only if Fred would sign up for service.

When he balked at the idea, Anita went to the top of a building and was prepared to jump to end her miserable life. It was only then that Fred agreed to join the military. Anita eventually rewarded him with a son – his junior.

By 1947, she had enough of that American nightmare that she kissed the US and even her husband goodbye. Fred would die in 1964 at the age of 43.

Lucky for her, Premiere Productions had opened the year before and was in need of leading ladies. In time, she became the film outfit’s top contract star – delivering not only revenues, but also prestige for the company.  In 1951, she won best actress for Sisa in the Maria Clara Awards given by the Manila Times.

With the fat paychecks she got from Premiere, she was able to buy herself a house. In search of peace and quiet, she chose to build a home in Makati - in Pasong Tamo, which was then mostly rice fields. Friends who came to visit all had the same comment: “Ano ka ba naman. Alice! Bakit ka tumira dito sa gitna ng bukid?”

But no matter what her friends said, she was happy that she was able to provide a home for her son. Her sister, a single parent, also lived with them, along with her children.

One early evening, she came home like everything was all right with the world. She was in a terrific mood - having just drawn her salary. But the day wasn’t over for her yet because she had said yes to a dinner party that evening.

In her bedroom, she started to fix herself up, while the kids were on the floor reading comic books. Seated in front of her dresser in a chemise, she felt hunger pangs. Not wanting to spoil her appetite, she asked for a glass of milk. One of the kids went to the kitchen to get it. But it wasn’t long before they heard a crashing sound outside the room.

When they went out to check, there was this intruder who held the kid at gunpoint. Mustering enough courage, Anita grabbed the child away from this man who wore a handkerchief that covered half of his face.

Her sister then went down on her knees to beg for their lives. It was at this point that Anita remembered her state of undress and so she ran to her room to cover herself with something decent. Soon after came the gunshot. The man fled - leaving her sister dead.

While still in grief over her sister’s death, Anita took on a firm resolve to get on with life – at least for the sake of her son and the children her sister left behind. That recent tragedy may have broken her spirit, but, at least, with her movie career, she felt she was stable financially.

Her glorious stint at Premiere, unfortunately, came to an end when the company was beset with labor issues. Although she could have simply embraced the management side that treated her well anyway, she decided to immerse herself among the lowly studio workers to check on their grievances.

That didn’t sit well with the owners of the film outfit, of course. To end the labor dispute once and for all, Premiere closed shop while still in the black.

Anita went to the other major studios to find work, but no movie company would touch her. Word got around that she was pro-labor and was on the side of the union members. Film-making was a business, after all, and labor demands could lessen the producers’ income. The last thing they needed was an actress championing the rights of studio hands.

Anita suddenly found herself a pariah in the movie world.