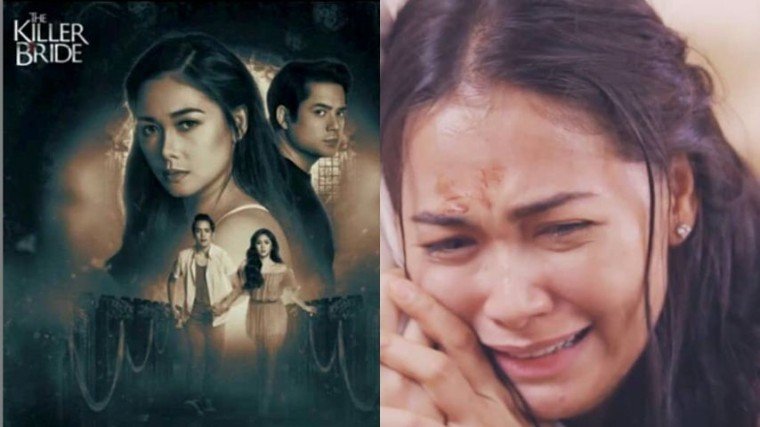 With ABS-CBN shunning no expense just to make this program a success, The Killer Bride may just totally kill the prime time soaps of the Kapuso network.

ABS-CBN is currently serving a visual feast through its newest nightly teleserye, The Killer Bride.

It’s quite a handsome production. There are beautiful mansions and elegantly-dressed people. The plantations are vast and there’s greenery all around. Even the town funeral parlor has a rustic charm to it.

This is how the fictional town Las Espadas is supposed to look like. And it is in Las Espadas where the story of The Killer Bride takes place.

Las Espadas is actually home and war zone to the feuding De la Torre and De la Cuesta families. Their rivalry makes the Capulets and Montagues look like peace-loving people.

The opening scene of The Killer Bride begins violently: One of the De la Torre women is sexually attacked and killed by a member of the De la Cuesta clan. From thereon they swear off each other and the bitterness is harbored even by the succeeding generations.

Over time, Las Espadas begins to have its version of Romeo and Juliet: Vito (Geoff Eigenmann) of the De la Cuestas impregnates Camila (Maja Salvador of the De la Torre family. Although both camps are still fighting, they agree to the legal union of the young lovers.

On the day of the wedding, however, tragedy strikes: Javier (Mandy Ochoa) of the De la Cuestas is murdered and Camila is accused of the crime. She ends up in jail where she gives birth to a baby girl.

One evening, fire engulfs the prison cells and Camilla and her baby are burned alive. Before breathing her last, she vows to come back and get even with those who conspired against her in life.

Moving on to another generation, we are introduced to the character played by Janella Salvador (Emma), who comes to Las Espadas to work as a makeup artist to cadavers. Already in bed one evening, she gets up and goes to the De la Torre mansion and introduces herself as Camila.

The pilot week of The Killer Bride truly goes off to a rousing start. It is very impressive, especially in terms of production values. The music is similar to the scoring of those old Merchant Ivory classics.

Particularly noteworthy are the performances of the cast members, especially former Urian winner Maja Salvador in the title role. She is ably supported by mostly veteran actors, led by Eddie Gutierrez (as the grandfather Jacobo), who had become seasoned through time.

That Cris Villanueva and James Blanco (as the uncles Luciano and Juan Felipe, respectively) turn in more than competent performances does not surprise the viewers anymore. These two men are among the reliable actors in show business today. But Cris needs to be told that “platano” (banana – the main crop of the De la Torres) is not said in one spit. One has to stop after “pla” before finishing the word.

The rest of the cast has to be aware of this because the name of the company of Luciano’s family is Platanos De la Torre and somebody is bound to once more mispronounce the Spanish word platano. How can Cris be believable as the head of Platanos De La Torre when he can’t even say the name of the family company properly?

Two international beauty queens also contribute to the success of The Killer Bride through their strong presence. Precious Lara Quigaman, who plays the young aunt Alice, had always wanted to be an actress even before she became Miss International. She chose the right profession because she is good at it.

In the case of Ariella Arida (Tatiana), I thought she’d make a good comedienne since she is always funny in her television interviews. Playing villain, however, seems to suit her just as well, especially when she uses her large, expressive eyes, which are actually among her best physical assets.

Aurora Sevilla, who portrays the De la Torre matriarch Guada, was also a beauty queen in her youth – Mutya ng Pilipinas 1984. After representing the Philippines in the Miss World pageant in London, she plunged into the movies and was memorable in Joe Pring opposite Phillip Salvador.

Not quite established as a beauty is Malou de Guzman. This theater veteran, however, is better known for her acting skills. She became a household name when she went into comedy via Ober da Bakod in the mid-1990s and even won a best actress award for it. In The Killer Bride, she plays Manay Ichu, the De la Torre servant who took care of Camila from birth.

In this new series, she is reliable as expected. The production designer, unfortunately, seems to have put her in the wrong house. Her role is that of a nanny who inherited the house of her parents (she later converts it into a funeral home).

The parents couldn’t have been rich – otherwise why would they allow her to be in servitude to the De la Torres? Then why does the ancestral home look like it used to belong to a former teniente del barrio?

Another disturbing factor in the first week of The Killer Bride is the verdict of the jury in the murder case filed against Camilla. Didn’t the judge even look into the fact that a woman will not commit a crime in her bridal finery? It would be way too difficult to maneuver in that!

Of course, The Killer Bride is too catchy a title to pass up – so let logic go hang.

But whatever lapses this program may have, it is still a joy to watch. It’s just too bad that the young rule show business, especially in Philippine setting. And so Week 2 has all those teen stars coming in and they’re such a bore. (Why do we always have to please the millennials?)

Aside from Janella, Joshua Garcia also has to be there to form a love team. Now, Joshua is a fine young actor – a two-time Gawad Urian nominee, in fact. But it’s difficult for him to shine when he is surrounded by veteran performers. And in a grand production like The Killer Bride, he’s just a dot in that tapestry.

Of course, when there is a love pairing, there has to be a third party – female, ideally – to make things complicated for the couple. In this case, the series has Alexa Ilacad (as Luna), who is this generation’s Opalyn Forster (google her!). Luna – as per tradition - has her retinue of rah-rah boys and girls.

With all those kids there, Week 2 of The Killer Bride was basically a blah. Oh, yes, could somebody help breathe a little more life into the performance of Janella?

Janella’s character is supposed to be possessed by the spirit of Camila. But nobody knows for sure when she’ll strike. Sometimes she’s there, sometimes she’s not. Let’s just say that she is one lucky ghost who has her days off.

It seems, however, that this ghost will be on continuous duty by Week 3 because – as per trailer – the horror element of The Killer Bride is about to rear its scary head.

Exciting days are yet to come. Maybe not for the creative staff of GMA. With ABS-CBN shunning no expense just to make this program a success, The Killer Bride may just totally kill the prime time soaps of the Kapuso network.