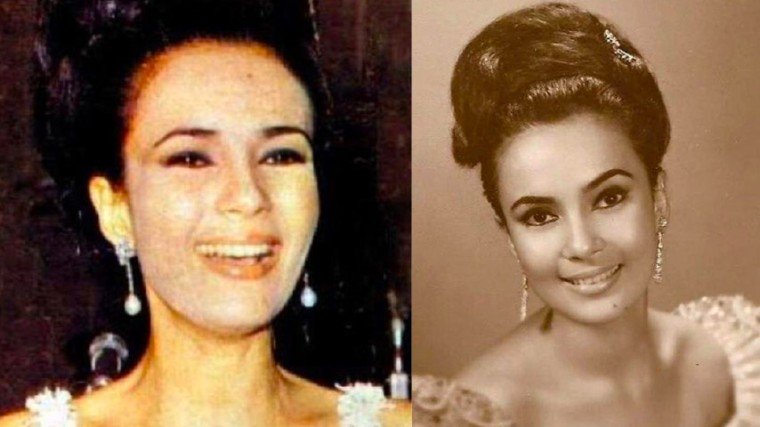 Putting things in their proper perspective, Amalia was a top Movie Queen – in the same level as Gloria Romero and screen rival Susan Roces. There are very few female stars who reached the status of these three actresses (less than 10 – count them). And it is sad that they don’t make movie queens like them anymore. Among the movie queens, she is undeniably the most beautiful – and has the most sex appeal. At age 34, she even posed in a two-piece swimsuit for the now-defunct Expressweek. Elizabeth Taylor of the Philippines – that was how she was called.

And she had to expire only hours after Tony Mabesa breathed his last and so she even had to share headlines with him – taking second billing because she died after he did.

It was also unfair to Mabesa because this theater great equally deserves his own prominent space in the obituary given his contributions not only to the world of stage, but in films as well (mostly in those prestigious Joel Lamangan projects). Mabesa, in fact, came this close to becoming National Artist in 2018 and in the very near future may yet be named one posthumously.

But I am very disappointed with the way media covered the passing of Amalia. For somebody of her stature, I didn’t think she was given the importance she deserved as one of the true queens of Philippine movies.

When comedian Tado died in a vehicular accident some five, six years ago, Unang Hirit had an OB van positioned outside his Marikina home practically every morning during the duration of the wake.

Sure, several television crews trooped to the actress’ two-night wake at the minor basilica of Mt. Carmel in Broadway, New Manila. (The first night at Arlington in Araneta Avenue was strictly for the Muhlachs.) But the level of media attention given to Amalia’s passing made her look like a mere footnote in the history of Philippine cinema.

Putting things in their proper perspective, Amalia was a top Movie Queen – in the same level as Gloria Romero and screen rival Susan Roces. There are very few female stars who reached the status of these three actresses (less than 10 – count them). And it is sad that they don’t make movie queens like them anymore.

Among the movie queens, she is undeniably the most beautiful – and has the most sex appeal. At age 34, she even posed in a two-piece swimsuit for the now-defunct Expressweek. Elizabeth Taylor of the Philippines – that was how she was called.

Of course, she had her share of detractors who criticized the lack of depth in her acting style. But her onscreen performances did improve in time, except that she made less and less films later in her career. And even if she was never generally acknowledged as an acting great, she still managed to win two well-deserved best actress awards – a FAMAS statuette for Ibulong Mo sa Hangin in 1966 and the Rajah Soliman trophy in the 1973 Manila Film Festival for Pag-ibig Mo, Buhay Ko.

Besides, no matter what people say, she will always be the legendary actress Amalia Fuentes and there will never be anyone else like her.

In local showbiz, it was she who paved the way for the talented Muhlachs – a clan that traces its roots to the couple Alejandro and Amalia Muhlach of Barcelona, Spain. I suspect though that there must have been some German connection up there in the family tree because of their surname. And, perhaps, some Jewish blood, too, because of their frugality?

Strangely enough, the Spaniards Alejandro and Amalia didn’t migrate to the Philippines from Barcelona at a time when Spain ruled over the islands. They arrived in the country shortly after - at the turn-of-the century when Filipinos were still adjusting to the American Occupation of the Philippines.

The couple had a son named Alvaro, who became a prized fighter and was known in the ring as Tony Tapia. Tapia is a Castilian word that means wall and I can only surmise that he got that name because his opponents must have felt like their were punching on hard concrete during their fights.

The Muhlachs initially were into the horse and carriages business. Alvaro, however, worked with the United Artists film distribution outlet here in Manila.  He eventually married Chinese mestiza Concepcion Amador and it is from her that Amalia traces her Bicol roots.

Alvaro and Concepcion had three children between them: Amalia, Alejandro (or Alex, the father of Nino) and Alvaro, Jr. (or Cheng, Aga’s dad). The family was living in comfort when the Pacific War intervened. They were scheduled to move back to Spain toward the end of the Japanese interlude, except that Alvaro Sr. died in a freak accident – making poor Concepcion a widow with three young children to feed.

When Amalia was nine, her mother remarried – a Fuentes this time – and the union produced four boys: Jose, Isagani, Ruben and David. The Fuentes stepfather (he later would become a Protestant pastor) brought the family all over the country, but mostly down south in Mindanao, particularly in Cotabato and Davao.

After moving from place to place, Concepcion decided to let her children take root in Manila – initially in Pasay, which by that time had already attained city status and was no longer a town of Rizal. When Amalia was 15 and a senior in high school, she applied for a scholarship grant that would allow her to study in a university in the United States.

During a spare time when there was no school, she and her mother went to the Sampaguita Studios in Gilmore to ogle at some of the film company’s glamorous stars. It was an Open House and, as expected, there was a huge turnout of fans. Somehow, Amalia got separated from her mother and was mercifully rescued from the crowd by film director Joseph Straight, the father of Lena Pareja, who later became one of the public relations people of Sampaguita.

This was how Amalia got discovered for the movies. In the beginning, she didn’t want to become a film actress and was bent on pursuing college.

But Amalia was quick to assess the financial standing of her family. At 15, she had only known hardship and poverty, especially since she was only a year old when war broke out in the Philippines. By working early, she’d be able to provide for her family. On the very same week she signed up for Sampaguita Pictures, the scholarship grant she applied for finally got approved.

Fate had decided for her. Philippine movies was going to have an Amalia Fuentes.

The Butcher | Should Martin del Rosario be apprehended for violating anti-smoking law?