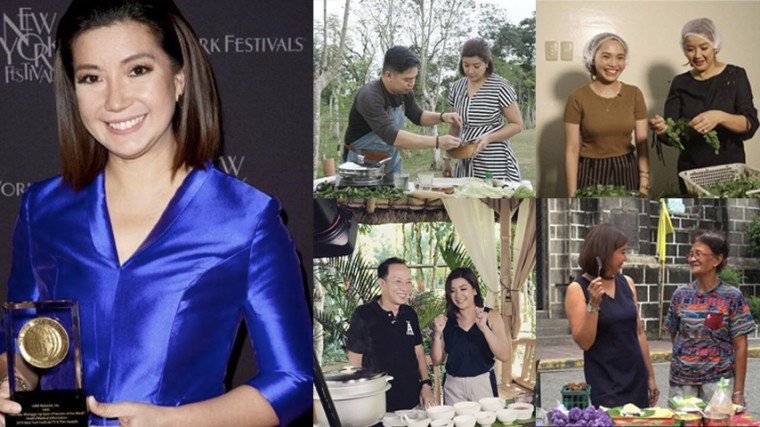 Pinas Sarap, hosted by Kara David, is perhaps the closest we have to the iconic Travel Time, although it is still several notches lower in terms of quality. I can only hope the late host-producer of Travel Time, Susan Calo Medina, is not doing cartwheels in her grave with the comparison. The writing of Travel Time—by multi-Palanca winner Floy Quintos—overflowed with elegance. I can’t say the same for Pinas Sarap because some of the spiels that host Kara David are made to deliver make me cringe.

The format of Pinas Sarap on GMA’s news channel is quite unique. Although it moves from province to province, it is not a travel show because it doesn’t feature places of interest. Since it focuses on food – Philippine cuisine, actually – maybe we can call it a traveling food show.

I’ve followed this program from the start – when it used to air late Thursday night up to its present time slot which is 7:15 p.m., still every Thursday.

The other week, I got very excited when I found out that Pinas Sarap was featuring my beloved province—Bulacan.

Since Bulacan was only two hours away from Manila that time (the drive is even shorter now when there is no traffic), we’d motor there practically every week. While I enjoyed those trips, I don’t particularly remember relishing the meals in our house there. We’d eat mostly seafood, which was unexciting for me because I’m a lazy eater and I don’t want to be shelling my food.

Even during the fiesta – May 4, the feast day of St. Helene – I thought the table fare was bland. The only exciting item there was the leche flan that was rich in egg yolk and steamed using firewood. Growing up, I thought that was the only delectable food Bulacan offered.

As an adult, I was eventually exposed to other regional cuisines. I discovered that Bulacan cooking shares a lot in common with next-door neighbor Pampanga, except that— unlike the Bulaquenos—the Kapampangans were able to establish themselves as the ultimate food experts.

As I found out later in life, some food identified with Pampanga had been on the Bulaqueno table a long time ago: suam, adobong frog, etc.

With Pinas Sarap focusing on Bulacan this time, I thought the province’s cuisine would finally have its day in Philippine food history.

The first stop of that Pinas Sarap episode was Malolos, the seat of history and culture. Host Kara David interviewed Dez Bautista, who was identified as a Bulacan food historian. Dez actually has bigger accomplishments than that. He is an award-winning production designer and is undeniably one of the best.

Pinas Sarap couldn’t have found a better location: the historic Bautista residence where Jose Rizal was once a visitor. Built in 1850, the house is located in an area that is more popularly known among older people as Kamestisuhan because a lot of Chinese mestizos settled there a long time ago.

With their family cook behind the stove, Dez shared what he claims is a dish with a lot of history to it and was, in fact, a favorite pulutan among the frailes: Hamonadong sugpo. I later asked some of the old-timers there if they also cook hamonadong sugpo, but unfortunately, they’ve never heard of it before.

Maybe hamonadong sugpo was a traditional Bautista dish, passed on from generation to generation, but was confined merely among family members. If that is the case, then we salute Dez for sharing with us a sacred Bautista recipe for the world to enjoy.

The next Bulacan food item featured in Pinas Sarap was lapu-lapu de la reina. Heck, that is just fish in mayonnaise! The first time I tasted that was when I was a child—no, not in Bulacan, but at a party in a neighbor’s house in Manila.

Kara made a big deal out of one item in the Pinas Sarap menu —Bulacan edition. She was over the moon that she got hold of the supposedly secret recipe and, in fact, cooked it herself for the benefit of the viewers. The dish: totsong bangus.

I lost my appetite for the show at that point. Totsong bangus (replaceable with tambakol) is a very common dish in most Filipino homes. Sure, the totsong bangus personally prepared by Kara was rather elaborate—tahure (fermented tofu) and all. But for Pete’s sake, it’s just totso!

From Malolos, the Pinas Sarap crew drove to Baliuag where they featured serkele, which is another version of dinuguan. Dinuguan, of course, is cooked differently in other provinces. In Ilocos, they have dinardaraan, while Pampanga has its tidtad. In a previous Malolos episode, Pinas Sarap also featured tinumis, another one of these pork blood stew concoctions.

According to Kara, sirkele is different from other dinuguan versions in the sense that it has a hint of bulalo flavor to it.

The rest of the Bulacan episode featured different recipes of pancit. One is called pancit alanganin because the one who concocted it wasn’t sure in the beginning what it was. It’s like guisado, except that the noodles swim in soup. There is also the pancit Marilao that is like palabok, but has generous toppings of ukoy.

While I didn’t expect that Pinas Sarap episode to cover 100% of Bulacan cuisine, I was hoping it would feature the truly famous specialties of the province. The show had already featured the very flaky empanada de kaliskis before and that was a treat. I don’t know if they’re done with the inipit of Malolos, but that is a must. Inipit is an almost bite-size piece of sweetmeat made of chiffon and has custard filling. It is very delicious, but I have to say, quite expensive.

Pinas Sarap perhaps should also have featured the putong Polo. Yes, before puto Calasiao (from Pangasinan) was sold in the streets of Manila, city dwellers drove to Valenzuela (formerly called Polo) for putong Polo. You bought this from ambulant vendors lined along MacArthur Highway (when there was no NLEX yet).

A more recent Bulacan suman innovation—if I am not mistaken—is Rosalie’s suman pinipig. This was introduced to me by the late Corazon Samaniego, founder of the Guillermo Mendoza Memorial Scholarship Foundation that hands out the annual Box Office King & Queen Awards. (Mendoza was once a Bulacan mayor).

Some four, five years ago, the suman pinipig found its way to the malls of Metro Manila. Unfortunately, some of these are knockoffs—copycats of the original Rosalie’s brand and do not taste as good.

Sorely missing in that Bulacan food adventure is the story with the sad ending of a truly famous ensaymada in Malolos. This ensaymada was said to be the most delicious ever. Unfortunately, the woman who developed this ensaymada quarreled with her heirs and died without passing on the recipe to them. That would have made a good feature.

But to be fair to the show, there are very few Pinas Sarap episodes that disappoint. Maybe I got frustrated with their Bulacan food trip because I expected so much since I trace my roots to the province.

Pinas Sarap is perhaps the closest we have to the iconic Travel Time, although it is still several notches lower in terms of quality. I can only hope the late host-producer of Travel Time, Susan Calo Medina, is not doing cartwheels in her grave with the comparison.

The writing of Travel Time—by multi-Palanca winner Floy Quintos—overflowed with elegance. I can’t say the same for Pinas Sarap because some of the spiels that host Kara David are made to deliver make me cringe.

As to the research done by the staff, I am not sure if I should believe everything the show tells us. The researchers rely too much on so-called food historians and they seem to take that as the gospel truth. Do they ever do counter-checking?

Pinas Sarap has to thank Kara David because she lends credibility to the program. Kara is one of the most respected names in the news and public affairs arena and the viewers are aware that she is bright and intelligent.

In Pinas Sarap, however, she has a tendency to make herself look frivolous – maybe to make the show look more fun. In her soprano voice, she shivers and tingles at every food tasting. Perhaps she should learn to take on a more authoritative stance because each episode of Pinas Sarap is a documentation of  history and culture. (And this is why the research should be intensive and accurate.)

She cannot be a female version of Chef Boy Logro who hams it up or be as sultry as Solenn Heussaff because the public takes her show more seriously than Idol sa Kusina and Taste Buddies.

And yes, I’m a bit bothered with the way she stuffs food into her mouth. I am not saying she has no table manners, but I guess she should be reminded that there is a camera in front of her every time she does a taste test and should be more mindful with the way she eats.

One time, I even caught her pushing her food into a spoon with her finger. In many instances, she also talks with her mouth full, which, of course, can be quite forgivable because she has to make comments about the food. But if she can avoid that—why not?

Am I already nitpicking? I don’t think so. Eating in a presentable way comes with the territory of hosting a food show like Pinas Sarap. And it is Kara’s job to make the show look delectable for all of us.