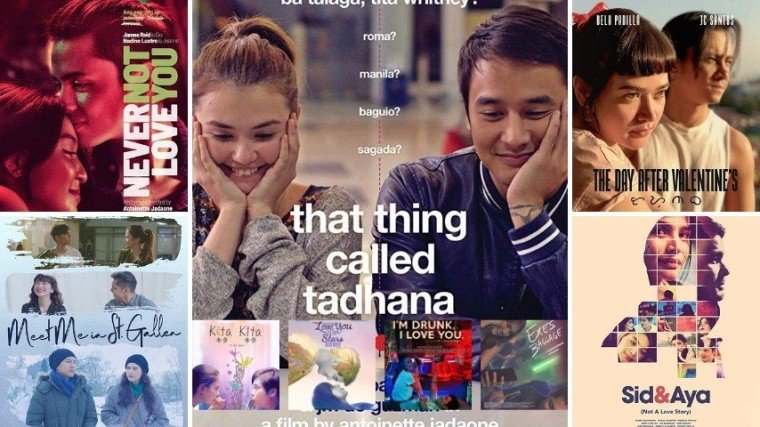 Since That Thing Called Tadhana (d. Antoinette Jadaone, 2014) made its way to the silver screen a few years back, the reception of netizens were shockingly accepting of Mace (Angelica Panaganiban) and Anthony’s (JM de Guzman) heart-aching, full of hugots, just-the-two-of-them story. It became so viral and crazy that the once quiet Sagada got full-packed after the movie. This became a go signal for filmmakers in the industry to join the trend with their own touch and a twist of the formula. Who would not swoon over the the Meet Cute of two characters lang, sapat na; the walk-and-talk full of hugot about life and love; plus the #wanderlust #feels rolled into one film?

These 11 films are the ones that will make us say ‘ang sakit-sakit na pero keri lang’:

Sakaling Hindi Makarating is the debut film of director Idanan which stars Alessandra de Rossi, Pepe Herrera, JC Santos and Teri Malvar. The movie did not disappoint our secretly #wanderlust feelings as Cielo (de Rossi), a heart broken artist, decided to see the hand-painted postcards with letters sent by an anonymous ‘M’. Thus, her travel around Zamboanga, Marinduque, Siquijor, Batanes, and Ilocos started.

The aquarelle postcards in the movie gave viewers the urge to pack our things, and go to the places Cielo went to. With or without the broken heart; with or without a jowa like Manuel (Santos), and a guy who’s waiting for our return like Pol (Herrera).

We love our best friend so much because they’ve been with us through thick and thin, like couples, just without the romance. The thing about I’m Drunk, I Love You—Carson (Maja Salvador) unfortunately crossed the line and fell deeply in love with her best friend for 7 years, Dio (Paolo Avelino). The reality hit her in the face when they went to their last roadtrip before graduation in La Union.

Filled with hugot songs, indie vibes and music, Carson’s unrequited love was a realization to graduate from the feelings because it won’t do any good to us. Sakit lang sa ulo like a very long hangover. Kumain na lang tayo ng bagnet, please?

2017 is the year wherein real people became the stars of a film. Kita Kita gave us the real thing when they cast Empoy Marquez and Alessandra de Rossi as the lead stars of this game-changer movie. This is about Lea (de Rossi) and Tonyo (Marquez) and their love story built in Japan. Most of the film only had Marquez and de Rossi on screen but there was never a shortage of the right feels, romance, drama, and comedy.

Also, how many did just book a flight to Japan and visit Saporro after watching this film?

After That Thing Called Tadhana (and Relaks, It’s Just Pag-ibig), director Jadaone gave us her third roadtrip movie after 3 years. This time, a younger demographic and RK feels with Mika and Caloy (portrayed by on and off screen partners: Julia Barretto and Joshua Garcia). These two are then strangers who met in a secluded highway and went to a trip together to justify the existence of aliens. Their road trip went to smooth, rough, en route, then stopped at their final destination, a symbolism of the two young adults’ lives, feelings, and beliefs.

The real question is, who on earth did not get an LSS with Moira dela Torre’s rendition of “Torete” while chanting Mika’s (Barretto) line: “Ashira grevinda mama ajaarum?”

A debut screenplay by Bela Padilla, strangers Carmina (Toni Gonzaga) and Mark (Piolo Pascual) had fallen in love when they decided to have a night to remember for the last time. The film got critical reviews from different sites as it touched the sensitive topic of committing suicide. Some said they depicted it truthfully, while others said it was shallow. Whether it was skin-deep, gave others hope, or a cinematic disappointment—Last Night was one of the movies that can manage 103 minutes of screen time with almost just two characters talking about life.

Note: If troubled, please talk to a trusted friend and / or seek for professional help.

After the success of Kita Kita, director Bernardo once again graced us with another film called Mr. and Mrs. Cruz, now with Viva Films as co-producer. The two curly-haired strangers Gela (Ryza Cenon) and Raffy (JC Santos) was so done with their lives in Manila that they decided to pack up to visit Palawan. There, they met and was mistaken as a married couple by their fellow tourist—which they went with just for the heck of it.

Like the rest of the films in the list, the characters had fallen in love because of their crazy quirks and crazy fast we’re-not-sure-what-they’re-talking-about-anymore dialogue. They shared longing stares, seducing tactics, and a dance outside a bar with just their drunkard state and neon swimsuits.

This is Carlo Aquino’s first leading man role in a film which was greatly received by many. His character Jesse met Celeste (Bella Padilla) and had a walk, talk, and coffee before sparks started flying around them. The film was divided into three parts: the Meet Cute, the heartbreak, then the solution, as it tackled self-discovery, romanticizing a stranger, and the frustration of a push-and-pull romance.

After watching the film, we wish we have someone special we can meet at St. Gallen while Moira dela Torre (again) sings her “You are my Sunshine” rendition at the background. Then, we can all say Celeste’s line: “Sobrang perfect naman ng moment na ‘to. ‘Wag nating sirain ito.”

Director Jadaone surely gets deep with this kind of trope as she made another one in a reunion project with loveteam Jadine this year; co-produced by Viva Entertainment. Unlike the light aura of That Thing Called Tadhana and the quirky yet deep drama of Love You to the Stars and Back, Never Not Love You was edgier, darker, yet still have this touch of simple and millennial #hugot #feels ang sakit-sakit na kind of thing.

Both Joanne (Nadine Lustre) and Gio (James Reid) struggled with passion and purpose as their relationship hanging loose and in the brink of separation. Most of the screen time only had the two but you wouldn’t feel the sawa factor, just frustrated with their #adulting problems we all could #relate. One of the rawest and most daring role of the love team since their Diary ng Panget days in 2014 (which was also produced by Viva Films).

Sid & Aya: Not A Love Story is definitely not a love story as it delves into Sid’s (Dingdong Dantes) insomnia and Aya’s (Anne Curtis) lack of sleep and need for money—both for survival. The dark romance got a lot more heart-breaking because of both actors (Dantes and Curtis) portrayal which gave a new life to their characters. They were like teenagers first time falling in love, staying in love, and falling out; but with heavier problems and themes. They were their own black swans.

Everyone surely remembers Stella and Fidel last 2017 as they stormed the whole internet with 100 Tula Para Kay Stella, the first project of director JP Laxamana with JC Santos and Bela Padilla. We thought we’re done with them, but nope, they were still not done with us.

One of his two entries for Pista ng Pelikulang Pilipino for this year, director Laxamana had a reunion project with JC Santos and Bela Padilla also under Viva Films. We were shocked that this movie was different than the first one, and we were not disappointed. The laughs, smiles, heartache, tears, and Baybayin learnings between Lani (Padilla) and Kai (Santos) were worthy as their characters and acting prowess punch us with the reality of self-harm, repairing others, and fixing our own issues.

The latest with this trend was also starred by Angelica Panganiban, with her on-screen partner (and real-life first ex) Carlo Aquino in a reunion project to satisfy our #CarGel fangirl heart. Funny enough, the theme was so relevant to the two which was all about exes.

It’s treatment is a back and forth of past and present Pia (Angelica Panganiban) and Nix (Carlo Aquino) relationship through the years. Again, like the rest of the films above, they were once strangers who had a day (or night) and built a connection (which grows in our little heart) within just a few hours of walking and talking. And then, the issue of ‘pushing through the relationship or not’ begins.

The two-main characters talking and driving the story forward trend, we think, won’t be stopping anytime soon so we’re getting ready to consume all of it, if we can. Tara, nood?