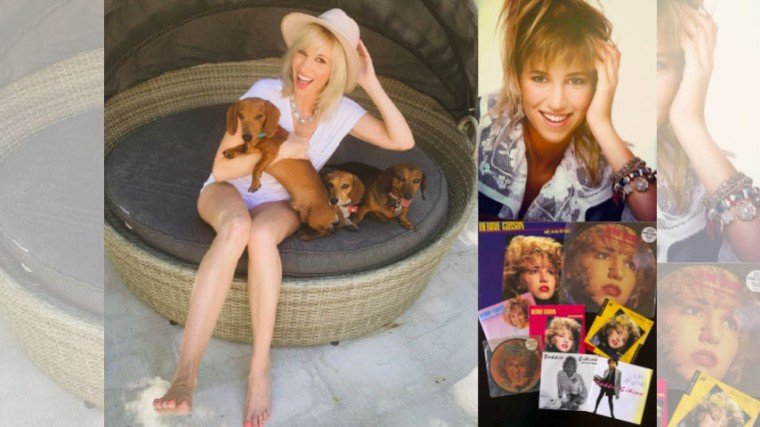 In an interview with People magazine, Debbie was asked if she could go back in time, what would she have advised to her teen self? She answered: 'If I could go back in time, I would tell myself to worry less and enjoy more. I always was a perfectionist to a fault, especially in preparing for live shows. As I've evolved, I've learned what we consider the imperfections are actually what make us unique and what makes a one-of-a-kind live performance. Always trust your instincts. Follow them in music, in love and in health. Nobody knows what's best for you better than you!"

The Teen Pop Princess of the '80s who dominated the airwaves with her hit singles "Foolish Beat," "Lost in Your Eyes," "Shake Your Love," "Say Goodbye," and "Electric Youth" turned 50 years old last August 31.

The latest Golden Girl, who currently resides in Las Vegas, spent her 50th birthday weekend with a couple of friends that she posted on Instagram:

"Birthday Weekend brunch with @daynaroselli @robinantin and a serenade by @mattgoss 💕 What could be better ?"

In another IG post, Debbie received an unexpected gift from her friends... a carousel horse, the same one that she rode on when she shot the music video "Girls Night Out".

"So this happened! My friends at @caesarsentertainment snuck the Carousel horse from my “Girls Night Out” video into my home while I was at Birthday Brunch on Sunday! I absolutely could not and cannot believe it ! Liberace now has company in the very eccentric piano room which now needs plush curtains to feature my beautiful new piece ! Gone are the days where I just pull up the blinds 😉 Thank you Damien, Darryl, Heather, Joey, Leo, and everyone who made this happen. What an extraordinary gift. I’m speechless. And that rarely happens 🦄 Wow... just WOW! #Grateful ❤️🙏🏽"

And in an emotional video, Debbie paid tribute to her mother, Diane Pustizzi Gibson, by wearing the gown she wore during her mom's 50th birthday.

"First of two posts in the gown I wore to MY Mom’s 50th Birthday which was at Tavern on the Green! It fits me 24 years later which is insane. I wanted to pay tribute to her yesterday because Mothers and their Children celebrate their special bond on birthdays ! Thanks Mom for bringing me into this world. This one’s for you!

"PS I remember shopping for this gown at @escadaofficial Couture in Chicago in the dead of Winter while on tour with Grease. I flew home to share in her special day and right back out to the road again!"

In an interview with People magazine, Debbie was asked if she could go back in time, what would she have advised to her teen self?

She answered: 'If I could go back in time, I would tell myself to worry less and enjoy more. I always was a perfectionist to a fault, especially in preparing for live shows. As I've evolved, I've learned what we consider the imperfections are actually what make us unique and what makes a one-of-a-kind live performance. Always trust your instincts. Follow them in music, in love and in health. Nobody knows what's best for you better than you!"

Deborah Ann Gibson was born in Brooklyn, New York and was only 16-years old when she released her first pop album titled Out of the Blue in 1987. It unexpectedly became a worldwide hit selling more than 5 million copies and spawned 5 number one hit singles.

Gibson the youngest female artist to write, produce, and perform a Billboard Hot 100 number-one single, "Foolish Beat." Her double-platinum second album, Electric Youth (1989), gave Gibson another U.S. number-one hit with "Lost in Your Eyes." Gibson is the sole songwriter on all of her singles to reach the top 20 of the Hot 100 charts. She was recognized by ASCAP as Songwriter of the Year, along with Bruce Springsteen, in 1989.

On her road to fame, Debbie collected several recognitions from the New York Music Awards, American Songwriter Awards, and she was inducted at the Long Island Music Hall of Fame in 2014. In 2018, she was one of Billboard's Top 60 Female Artists of All-Time.

In addition to music, Debbie started to appear on Broadway and touring musicals, including playing Eponine in Les Misérables and Sandy in Grease, as well as television and independent film work.

Because of her popularity, Debbie, like any other celebrities, became a target of stalkers. One of them was Robert Bardo who was convicted of murdering actress Rebecca Schaeffer in 1989. The walls of Bardo's house was filled with pictures of Gibson and her rival, Tiffany Darwish.

Another stalker was Michael Falkner, who was arrested outside Manhattan's Palace Theater, where Gibson was performing in the live-musical adaptation of Disney's Beauty and the Beast in 1998.

In 2008, Gibson filed for a restraining order against Spanish taxi driver Jorge Puigdollers, who had stalked her since 2002.

Gibson never married and has no children. She was once engaged to Jonathan Kanterman. She is currently in a long-term relationship with Rutledge Taylor since 2008.

“I grew up saying I’m gonna get married, I’m gonna have kids, I’m gonna get married, I’m gonna have kids, and then when you examine what your own personal reasons for doing it are, I couldn’t really come up with anything because I was like, I’m not fanatically religious to the point that I feel that pull. To me, my commitment is to my man, and our commitment is to wake up every day and do our best to make it work, because there obviously are challenges, but at the same time we’ve also always agreed that if it was not healthy for either one of us to be in the relationship anymore, then we shouldn’t be in it.

“To me, it’s not loving to say I’m holding you to this agreement, even though we’ve tried everything and it’s not the best and the most loving. And you know what, at that moment, if that happens, I don’t want a lawyer involved. It’s nobody’s business but ours. I don’t want anyone profiting off it. So we’re way more committed than most people are who have a piece of paper. We don’t run easily. I feel like I’m married at heart, and I take the commitment very, very seriously. But again, I love him so much that I want him to be happy, and if that meant without me then that meant without me.”

The singer have battled Lyme disease back in 2013. Because of what she experience with her illness, she thought it best not to have children.

“I was thinking a lot about kids in my late 30s, even 40, and again, in the context of our relationship, it didn’t feel like the right time. And then I had the Lyme thing happen, and then it became about me. Then it became about okay, now I need my body just to function for me, and I can’t even think about that. I can’t think about egg freezing, I can’t think about anything like that, because right now if I so much as take an aspirin, I have a reaction. I’m very hypersensitive to any chemistry changes in my body, hormonal or otherwise.

“Honestly, I’m at the point where, because I didn’t do it at 35, I just don’t know now, and I’ve decided it’s okay that I don’t know. I mean, I feel like the universe might decide it for me, obviously, but I also am open to adoption.

"My dad was an orphan, he grew up in the foster care system, he didn’t meet his own dad until he was 50, so I’m very, very sensitive to people who need to be adopted. I just feel like the right thing is gonna happen, but I feel like I’m coming out of a black hole, out of a tunnel of Lyme disease, and I’m just getting my own footing.”

Dwayne “The Rock” Johnson reveals he and immediate family are recovering after testing positive for COVID-19; shares reflections on diagnosis