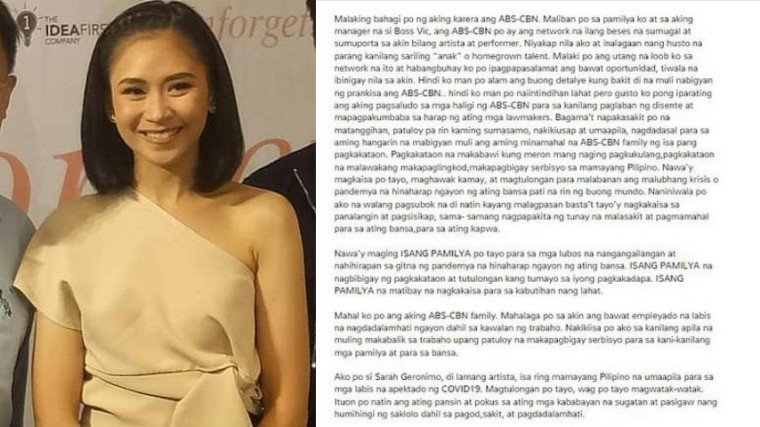 Sarah Geronimo breaks her silence to voice her support for ABS-CBN amidst its shutdown issue!

In a rare instance, Sarah Geronimo has made her voice known online, finally saying her piece on the issue of the ABS-CBN shutdown.

Supporters of the media giant have called her out on social media, saying she has not spoken up for her network ever since its franchise issue erupted. Her Popsters, though, have assembled behind her, trending the term "Protect Sarah G AtAllCost" on Twitter.

Some even surmised that she is one of the Kapamilya celebrities lambasted by Angel Locsin who, in a speech during the ABS-CBN noise barrage last Saturday, July 18, called out her fellow Kapamilya stars who have been silent about the franchise issue.

The singer-actress released her statement last Sunday, July 19, beginning with photos of Bible quotes from the books 1 John and Proverbs.

In the next photo was her actual statement, beginning by expressing gratitude to ABS-CBN for supporting her in her body of work while appealing to give them a chance.

Despite admitting that she does not know the full details on why her home network was not granted a franchise, she saluted ABS-CBN executives who spoke before Congress in the many hearings they have attended.

She also said that now is the chance to make up for shortcomings and to serve the Filipino people.

The Pop Star Royalty also called for unity in this time of pandemic and shared her sympathies to the ABS-CBN employees who are relieved of their jobs because of the network's shutdown.

She began to conclude her statement by asking everybody to build each other up and not tear each other down, saying we should shift our focus to helping our fellow countrymen.

Pika's Pick: Edward Barber feels hurt by people laughing at the fate of ABS-CBN; promises to help out instead should the situation is reversed. 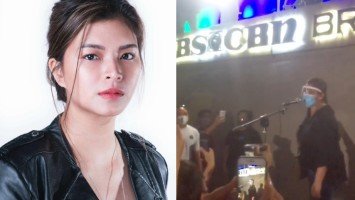 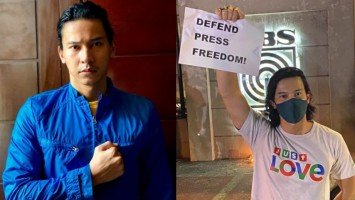