Regine Velasquez pokes fun at herself with a hilarious tweet 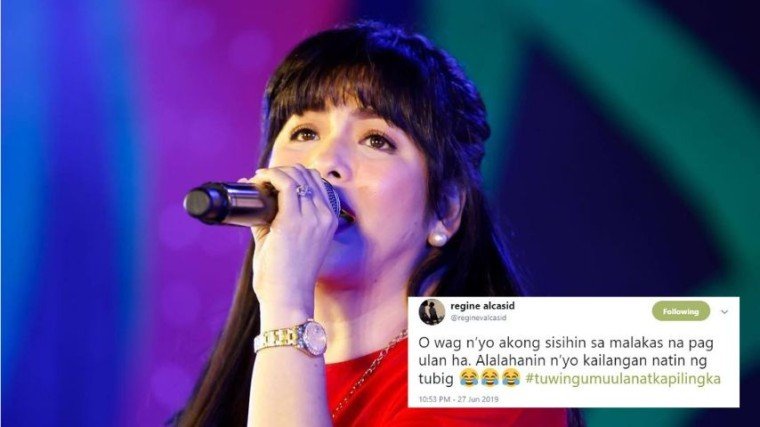 Asia’s Songbird Regine Velasquez welcomed the rainy season with a hilarious tweet—warning everyone not to blame her for any sudden downpour.

It all started when a netizen created a meme back in 2016 based on the singer-actress’s hit song cover of Ryan Cayabyab’s “Tuwing Umuulan at Kapiling Ka.” The song is about two lovers enjoying their time together despite the heavy rain.

The meme that went viral was a collage photo of Regine who appeared belting high notes from the song,  juxtaposed with random pictures of Filipinos blaming her for being stranded or affected by floods.

Regine herself found the meme so hilarious that she had since been anticipating the start of the rainy season just so she can finally revamp the old rainy-weather joke on her social media accounts.

The 49-year-old Kapamilya artist’s fans love it that their idol has such funny side. Her followers on Twitter alone, gave her a thousand thumbs up after tweeting the meme yesterday.

If you need a good laugh, scroll down for more Regine’s and Regine-inspired rainy weather memes: