QCinema honors the Father of Viva Films with a Lifetime Achievement award! 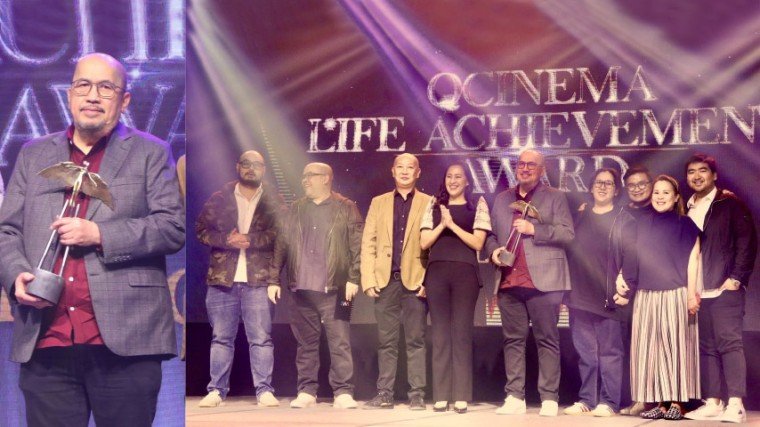 The 2019 edition of QCinema International Film Festival honors Viva Films topman Vicente “Boss Vic” del Rosario, Jr. with a Lifetime Achievement Award for his priceless contribution, not just to Philippine cinema, but for the entirety of the country’s entertainment and creative scene.

Before calling him up onstage last night to receive his pylon trophy, Boss Vic was treated to a five-minute audio-visual tribute that encapsulated all his achievements in the entertainment field for the past 53 years starting off by his founding the Vicor Music Corporation in 1966.

Calling him a visionary, the QCinema also lauded his efforts in strengthening the OPM (Original Pilipino Music) and for, later on “fusing music and films” through his Viva Films.

The festival also did not fail to acknowledge his keen eyes in discovering and honing genuine multimedia artists that are worthy of adulations by their own generations—Sharon Cuneta in the 80s, Regine Velasquez in the 90s, and Sarah Geronimo in the 2000s.

“Forged and strengthened by time, Viva is now a multimedia company, crossing over different platforms and breaking through the barriers of entertainment,” the audio-visual tribute said.

“The times may have changed but one thing remains constant, Viva is still here, providing Filipinos—and now global audience— quality entertainment across all platforms.”

In his short speech thereafter, Boss Vic—who was addressed as that night as the “entertainment expert, the visionary, and the father of Viva”—said the award will only do one thing to him: inspire to create more.

Part of his speech went:

“Thank you to the people behind QCinema especially Mayor Joy Belmonte...it’s such a great honor to be given recognition from the city where I put up the Viva headquarters when we started in 1981. The city where I stood became my residence and the city where my kids grew up in.

“This award will continue to inspire me to nurture new artists and creating meaningful content for the future generations. Filipinos are very talented and as long as we cultivate our artists—directors, writers, actors, singers, and composers—we will continue to produce great contents that will be a precedent not only in the Philippines but globally as well.”

Meanwhile, the film Babae at Baril, which is about the daily struggles of a department store saleslady, went home with two major awards: Best Director for Rae Red, and Best Actress for Janine Gutierrez.

Below is the complete list of winners, in order of announcement:

The QCinema International Film Festival, which was “designed to serve as the lens through which the general public will get to appreciate the active role of Quezon City in Philippine filmmaking from its pioneering years in the 50’s down to the present and on to the future” is held annually every October.

This year, it runs from October 13-22 in select QC Cinemas.