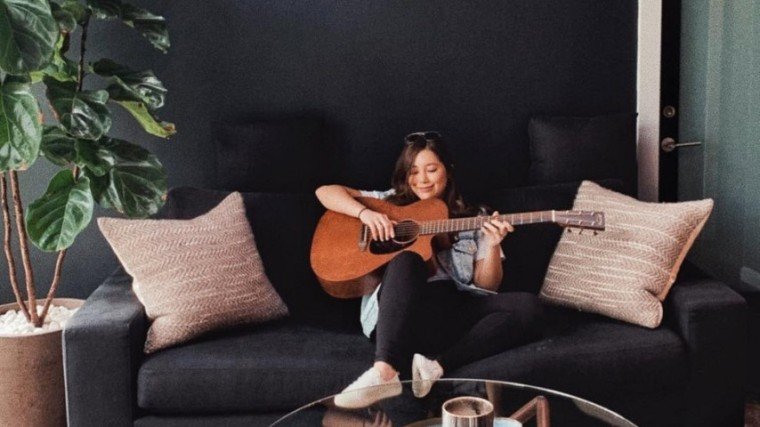 “It has been such a struggle for me to write songs the past few months that I struggled w[ith] so many lies in my head..” says Moira.

Moira Dela Torre shares a wonderful story via Instagram how she managed to make a breakthrough amidst her creativity block.

The musician has been trying to write songs recently but she can’t seem to put everything into words specifically now that she’s experiencing her “most challenging season yet”.

But all thanks to her ninong Jonathan Manalo who helped her get inspired by buying her a new guitar she have been eyeing for quite a while and she named it Nazareth.

Through God’s grace as she claimed, the singer-songwriter was able to finish writing and recording four tracks and three more songs in the works.

“It has been our most challenging season yet, but the most rewarding of all. I experienced asking God for miracles that didn't come the way i wanted it to, only to find out His plans were so much better.”

“I learned to trust that He always has the final say even when the world's findings say otherwise. It was a season of learning to praise God, not just in the storm, but also in the desert when you don't get the answer you expected, and yet trust that He is doing something greater. And He was. This photo is an example of that.”

“What we had wanted originally wasn't available but one of our dream guitars was. But the dream guitar was also more than twice the price. It has been such a struggle for me to write songs the past few months that i struggled w so many lies in my head, esp when writing is my outlet and i couldnt seem to write about my most challenging season yet.”

“I picked up the guitar and we sang a worship song we wrote called "Anchor" and it just felt amazing, to be worshipping in the middle of guitar center in LA with a guitar we couldnt afford.[laugh]”

“so we fiddled around the idea of maybe getting it when our Ninong @jonathanmanalo out of nowhere says "God wanted me to get you this guitar." And that he did. [cry] I know it isn't the Nazareth in Israel but the one in the US haha but my heart jumped when we looked inside the guitar and it said "MADE IN NAZARETH."[heart]”

“It has now been 3 days since and i am very happy to tell you that we have finished writing & recording 4songs and have started on 3 more. I have also been healed and have been healing very well. [smile]”

“I share this because whatever season I find myself in, whether in the desert or through the storm; whether in the hospital or on stage; whether in breakthroughs or in breaking, the reason behind all the inhaling and exhaling, all the writing and the singing will always be Jesus.”