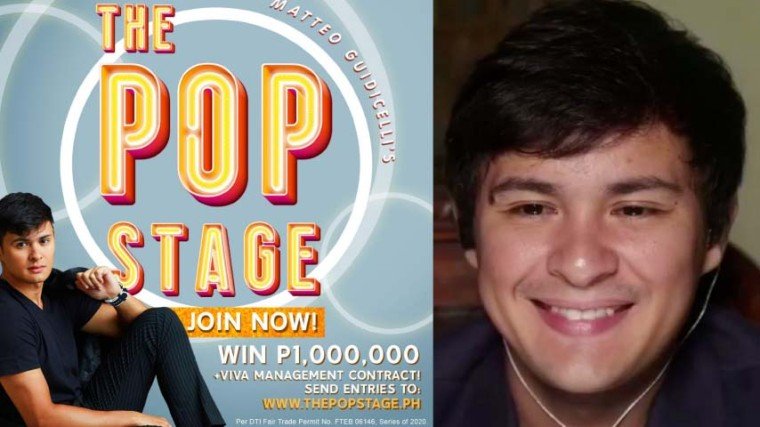 Besides the hosting job, Matteo says he’s also part of the show’s conceptualization earlier on; plus he will have a hand in the judging later on.

Matteo Guidicelli, the first brand ambassador of Popeyes Philippines, is excited to host his first ever online show, The Pop Stage, which premieres tonight, May 10, at the Facebook Page The Pop Stage.

The Pop Stage is an online talent search initiated by Matteo and is being supported big time by Popeyes Philippines, which has been for Matteo in all his charity efforts including Heroes’ Day celebration for the soldiers when he was still training in Camp Tecson in Bulacan, his relief efforts for Taal volcano eruption, and his recent effort for the Covid-19 crisis just to name a few.

Big time, we say, because the cash prize is a whopping P1 million pesos plus a one-year talent management contract with the Viva Artist Agency!

“We thought of this and they [Popeyes] said they’re gonna give one million [pesos], then I called up Boss Vic [del Rosario of Viva Films] and he says he can give management contract...so, everything just fell into place,” Mateo says excitedly at the May 9 digital conference.

“We see Matteo being an active citizen of the community,” adds Mr. Francis Reyes, the Chief Financial officer of the Kuya J Group of companies, the umbrella organization of Popeyes Philippines, at the digital conference.

“So this is actually one of the visions that Matteo had and and we’re supporting him talaga. We’re just making it a reality for all of us.”

He goes on: “The talent show is something that Mateo has been looking forward to creating especially helping and guiding the youth. Matteo’s goal has always been to bring joy to people and that’s what Popeyes has been doing as well. It’s always inspiring to see individuals showcase their talents amidst the many challenges of life.”

Mr. Reyes adds that an online search is fitting at the moment since everyone is in quarantine. Thus, they want to make the contest very accessible for the youth.

“There’s a number of reasons why they’re maybe held back in terms of sharing their talent,” explains Mrs. Reyes. “Either the difficulty in going to Manila to audition, the time that it takes out of working and earning a salary, or even the simple act of courage of showing who they are and how they’ve been living is oftentimes very challenging.

“That’s why we really focused on making sure this is accessible for them to be able to submit their entries. Having this online talent show creates many opportunities for many talented Filipinos. We hope we can inspire more to find the courage and inspiration in sharing their talents to the people and knowing they also inspire others to have a glimpse of hope in the everyday lives that we live in. That is why we are here now to support Matteo in this cause.”

Matteo further explains that they are limiting the ages of participants from 13 to 25 at the moment so as they won’t have a deluge of applicants. But he is encouraging participants to be as “raw and organic” as possible in the entries they’d be sending. And while the contest is open for all talents—singing, dancing, drama/comedy acting, magic— he is discouraging dangerous stunts as entries. So, the “bubog-eaters” aren’t allowed.

So, if you’re 13-25 years old, you may upload the videos of your performance at www.thepopstage.ph. Deadline of submission of entries is on May 27, 2020.

Initial selections will be done by Matteo and the Popeyes’ team but there will be celebrity guest judges later on. But Matteo won’t reveal any of them yet. Besides that, there will be public voting as well.

When asked if his wife Sarah Geronimo will take part in any part of the show, be as a judge or a guest, Matteo straightforwardly said: “You know, it would have been very, very nice... but she’s working with a different [fast food] company.”