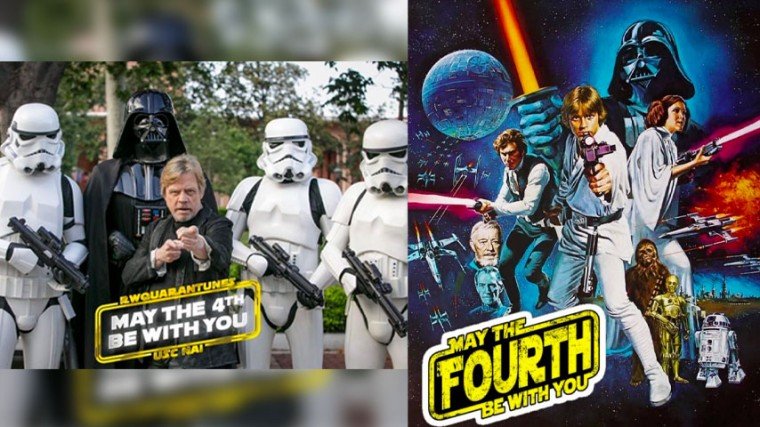 Mark Hamill, who played Jedi master Luke Skywalker, was master of ceremonies for the May the Fourth-themed Quarantunes, a semi-weekly invite-only Zoom concert series which raised money for USC's Neighborhood Academic Initiative (NAI). "This is really a special occasion for me. I'll probably never do a movie that gets its own day,” says the 69-year old Hamill who joined via Zoom call from Serbia, where he is currently filming a movie.

In celebration of “May The Fourth,” several Star Wars legends have teamed up for a great cause—to support children in school.

Mark Hamill, who played Jedi master Luke Skywalker, was master of ceremonies for the May the Fourth-themed Quarantunes, a semi-weekly invite-only Zoom concert series which raised money for USC's Neighborhood Academic Initiative (NAI).

The NAI "supports more than 1,000 children in college access programs and early literacy programs each year," according to USC's website.

"This is really a special occasion for me. I'll probably never do a movie that gets its own day,” says the 69-year old Hamill who joined via Zoom call from Serbia, where he is currently filming a movie.

Joining Hamill was the star of The Mandalorian, Pedro Pascal, who admitted that he had “helmet hair.”

"It's amazing what you guys are doing. I hope you raise a lot of money today,” says the 46-year old actor.

The 84-year old Williams sang "Our Love Is Here to Stay" during his introduction, while the 76-year old Oz opened up about how though he was hired to provide the puppetry for Yoda, he almost didn't voice the green Jedi master.

"Well, actually when I did the character, I did a voice, but it was not Yoda's voice,” he laughs.

Oz said he later provided some potential voices for the character, but that George Lucas auditioned several other voice actors for Yoda.

Oz added that Lucas, eventually called him during his honeymoon after marrying his first wife.

"’Hey, Frank, maybe you can do the voice after. Maybe you can come down to L.A.,' " Oz recalls what Lucas told him.

Tina Fey also joined the call, and opened up about playing Princess Leia in one of the episodes of 30 Rock.

Her character, Liz Lemon, tried to play the iconic Star Wars character to get out of jury duty.

The late Carrie Fisher became a guest on 30 Rock and delivered her iconic line on the show: “Help me, Liz Lemon, you're my only hope."

"And I was like, 'So, you know, in this part is kind of a reference, and [Fisher]'s like, 'You think? You think I don't know what you want me to do here?'” Fey says of her conversation with Fisher.

Kelly Marie Tran, who played Rose Tico in The Last Jedi and The Rise of Skywalker, also made an appearance, opening up about hanging out with Star Wars legend Hamill on the set.

"I was really, nerdy when I got to set and just would sort of go on set for all the scenes that I wasn't in. So I got to see Mark a lot and he was really welcoming me into their family and we would hang out on the weekends and watch movies."

The night not only featured the many people behind Star Wars, but also magical musical performances.

In a pre-recorded segment, Josh Groban and Aloe Blacc did a duet of "Imagine" in front of the Millennium Falcon.

The franchise's iconic composer, John Williams, made a brief cameo performing the main theme of Star Wars on piano.

Since lockdown began, Quarantunes has raised more than $24 million.

May the 4th has been a special day Star Wars fans since the late ’70s a nd it also also known as Star Wars Day, an unofficial holiday that originated from the line “May the force be with you.” The said line was from from the 1977 Star Wars: A New Hope.