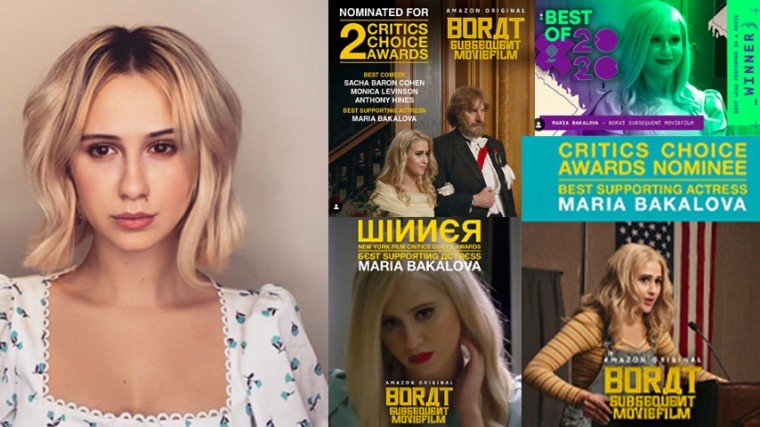 Bakalova’s performance in Borat Subsequent Moviefilm earned her critical acclaim and made her as the first Bulgarian actress to receive a nomination at the Golden Globes (Best Actress – Motion Picture Comedy or Musical), Screen Actor’s Guild Awards (Outstanding Performance by a Female Actor in a Supporting Role), and the Critics' Choice Movie Award (Best Supporting Actress).

Who is Maria Bakalova?

Bakalova’s performance earned her critical acclaim and the made her as the first Bulgarian actress to receive a nomination at the Golden Globes (Best Actress – Motion Picture Comedy or Musical), Screen Actor’s Guild Awards (Outstanding Performance by a Female Actor in a Supporting Role), and the Critics' Choice Movie Award (Best Supporting Actress).

Aside from her big break in Borat, Bakalova has a small part in the critically-acclaimed film, The Father.

In the breakout star’s interview with Deadline, Bakalova shares her Cinderella story as well as the best, hardest and scariest moments working on the film, Borat.

Born in the town of Burgas, the actress graduated in 2019 at the Bulgarian National Academy for Theater and Film Arts. Weeks after receiving her diploma, she self-tape an audition for a mystery casting call that would eventually change her life.

“My first love was music. By the time I was 12 or 13, that was no longer enough, I expanded into acting. I want more,” she says.

At the performing arts high school, where she was a straight-A student majoring in acting and minoring in flute, she started doodling the Hollywood sign on her desk, and jotted down thoughts about moving to L.A. in her notebooks.

“I started dreaming that I was arriving in Los Angeles, rolling my suitcase down those iconic palm tree-lined streets, with the Hollywood sign in the background, and I was telling myself, ‘I’m going to be a great movie star someday,’” says Bakalova, quoting Marilyn Monroe.

She adds: “I told myself, these are just childhood dreams. There haven’t been any big Hollywood stars from Eastern Europe. I focused on European cinema. I studied the works of top filmmakers like Ingmar Bergman, Emir Kusturica, and Andrey Zvyagintsev and became a big fan of Danish films.”

Bakalova credits her acting skills to directors Kristina Grozeva and Petar Valchanov, two of the top Bulgarian filmmakers of the past decade.

“They taught the only film acting class at the Academy, and I loved it so much I volunteered to help Grozeva and Valchanov with scheduling and other tasks so that I could attend each week. I even traveled with them to the set of a film the pair were directing and rendered PA services for free just so I could watch and learn.”

When one of the directors called her in her third year at the Academy to invite her to audition for a very small part in their new movie The Father, Bakalova was ecstatic. She landed the part and filmed her brief scene as the wife in a flashback as a young TV actress.

“The film tackles a global problem; the problem of communication in the age of mobile devices that have become handy during the COVID-19 quarantine, but that have also destroyed our ability to have a real conversation,” she says about the film.

A casting director saw Bakalova in The Father and sought to cast her as Borat’s daughter Tutar with the help of Bulgarian actor Julian Kostov. The actor found Bakalova and assisted her to a secret audition.

Borat Subsequent Moviefilm was, at that time, a secret project. Virtually all the girls in Bakalova’s class had sent in audition tapes, along with the required NDAs (Non-Disclosure Agreement) and were awaiting a response. But Bakalova was skeptical about the project, and suspected something, like human trafficking.

“Well, I’m not going to be the only one who didn’t audition. I recorded myself when I got home from a party at around 5 a.m. I got a call for a movie shoot later that morning. I had time to do only two takes,” she recalls.

For Bakalova, her challenge was to overcome her fear of speaking in English, and the feelings of insecurity about her Bulgarian accent, something she considered a big obstacle to a Hollywood acting career.

“I would stay up all night watching the Oscars live every year, telling myself, ‘God, why wasn’t I born in an English-speaking country so I could have a shot at being there?’

“But I have since accepted speaking with an accent. It’s part of who you are. Part of your ethnic background, and not something to be ashamed of.”

A year later, Bakalova marked the anniversary of her audition with an Instagram post from the house in Los Angeles where she was quarantining while filming Borat Subsequent Moviefilm.

In a post written in Bulgarian, Bakalova chronicled her journey from making the tape as a joke, through the “scary” trip to London for the in-person audition, to working on what she called, “The greatest and funniest movie. EVER.”

She even included a video (with no sound) of that fateful first audition.