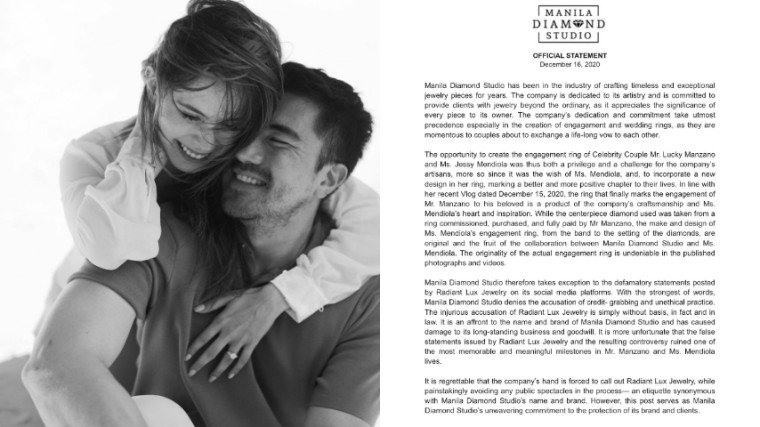 Manila Diamond Studio, the jewelry company credited for the redesign of Jessy Mendiola's engagement ring, has released a statement regarding "credit-grabbing" claims of Radiant Lux Jewelry.

Manila Diamond Studio, the jewelry company that redesigned the engagement ring of Jessy Mendiola given by Luis Manzano, has released a statement regarding Radiant Lux Jewelry's claim of them "credit-grabbing" and doing "unethical practices."

In a post on Facebook, Manila Diamond Studio cried foul of the "defamatory" claim of Radiant Lux Jewelry, who said they were the original designers of the actress' ring.

"The injurious accusation of Radiant Lux Jewelry is simply without basis, in fact and in law," they said. "It is affront to the name and brand of Manila Diamond Studio and has caused damage to its long-standing business and good will."

“It is more unfortunate that the false statements and the resulting controversy ruined one of the most memorable and meaningful milestones in Mr. Manzano and Ms. Mendiola’s lives,” they added.

Read their full statement below:

In a now-deleted post on their various social media accounts, Radiant Lux Jewelry said they felt the "need" to inform the people that the ring was their original work, while saying Luis and Jessy's decision to give credit to Manila Diamond Studio was "very misleading and unethical."

Jessy, in a vlog posted on YouTube last December 15, responded to the statement, explaining how Radiant Lux Jewelry "robbed" her of the life milestone of her fiancé surprising her with an engagement ring during a proposal.

This led them to having the ring reset to erase negative memories.

Since Luis already paid for the ring they bought from Radiant Lux Jewelry, Jessy said they had the right to do anything they want with it, including a redesign.

Manila Diamond Studio was credited by the celebrity couple for the ring's reset.

It could be recalled that Jessy and Luis surprised netizens when they posted their engagement shoot last December 12.

Luis Manzano and Jessy Mendiola spill details about their engagement

Jessy Mendiola emotionally opens up about engagement ring controversy and break up with Luis Manzano last May, says someone ruined the whole engagement experience for them