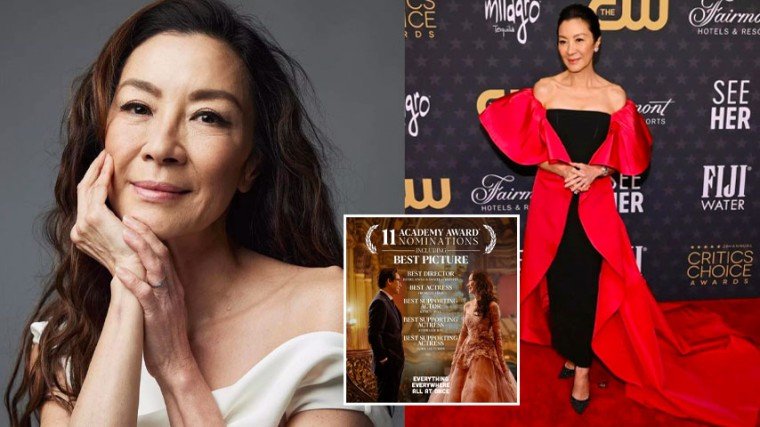 Malaysian icon Michelle Yeoh is the first Asian actress to break down that wall and receive a best actress nomination for her first lead role in the Hollywood film Everything Everywhere All at Once. The 60-year old former beauty title holder (Miss Malaysia World and Miss International Tourism Quest, both in 1983) and actress have successfully crossed over from being a Hong Kong movie star to being an award-winning and critically-acclaimed Hollywood actress.

For the first time in 95 years, the Academy of Motion Picture Arts and Sciences (AMPAS) have finally given an Asian actress a place in the best actress category.

Malaysian icon Michelle Yeoh is the first Asian actress to break down that wall and receive a best actress nomination for her first lead role in the Hollywood film Everything Everywhere All at Once.

The 60-year old former beauty title holder (Miss Malaysia World and Miss International Tourism Quest, both in 1983) and actress, known for her supporting yet scene-stealing roles in such films as Crouching Tiger, Hidden Dragon; Memoirs of a Geisha, Tomorrow Never Dies; The Mummy: Tomb of the Dragon Emperor; Shang-Chi and the Legend of the Ten Rings and Crazy Rich Asians, have successfully crossed over from being a Hong Kong movie star to being an award-winning and critically-acclaimed Hollywood actress.

In her recent interview with The Hollywood Reporter, Yeoh said that she waited for a long time and it was all worth it.

“It’s taken a long time. But I think this is more than me. At the present moment, constantly, all the time, having Asians walking up to me saying, ‘You can do it, you’re doing it for us.’ It’s like, ‘I understand. I totally understand.’ All this time, they’ve not been recognized, they’ve not been heard.”

Oscars’ best actress category is historically one of the awards body’s whitest and least diverse, certainly among the four acting races.

Women from the global majority represent a slim minority of nominees, with Halle Berry the only winner, more than 20 years ago, for Monster’s Ball. Barely a dozen Black women have been nominated for best actress, the first was Dorothy Dandridge for Carmen Jones in 1955. This was followed by Diana Ross (Lady Sings The Blues), Cicely Tyson (Sounder), Diahann Carol (Claudine), Whoopi Goldberg (The Color Purple), Angela Bassett (What's Love Got To Do With It?), Halle Berry (Monster's Ball), Gabourey Sibide (Precious), Viola Davis (The Help), Quvenzhané Wallis (Beast of the Southern Wild), Ruth Negga (Loving), Cynthia Erivo (Harriet), Viola Davis (Ma Rainey's Black Bottom), and Andra Day (The United States Vs. Billie Holiday).

Keisha Castle-Hughes, a Māori or Polynesian people of mainland New Zealand was the first indigenous actress to receive a best actress nomination for The Whale Rider in 2003.

Not until today, not a single woman who identifies as Asian, the largest racial group on the planet, has been recognized as best actress by the Academy Awards.

Technicalities exist: Some record keepers consider Merle Oberon (1936, The Dark Angel) to be the first Asian best actress nominee, but she hid her ancestry. Her mother was reportedly of partial Sri Lankan descent and passed for white.

Likewise for double Oscar winner Vivien Leigh (Gone With The Wind, A Streetcar Named Desire), who was born in British-colonized India and whose mother might have had partial Western Asian ancestry.

And although past nominee Salma Hayek and winners Cher (Moonstruck) and Natalie Portman (Black Swan) all have claims to some Western Asian heritage (Lebanon, Armenia and Israel/Russia, respectively), none has identified as Asian.

Interestingly, Yeoh’s EEAAO character, the immigrant laundromat owner Evelyn Wang, is not the first Asian character to be recognized in an Oscar-worthy lead actress performance. That distinction goes to The Good Earth’s hardworking Chinese wife O-Lan, whose portrayer earned Oscar gold all the way back in 1938 at the 10th Academy Awards: the 100 percent white actress Luise Rainer.

Here is the full list of the 95th Academy Awards nominees with the film Everything Everywhere All at Once leading the pack with 11 nominations:

Best Original Song
—“Applause” from Tell It Like a Woman, Music and Lyric by Diane Warren
—“Hold My Hand” from Top Gun: Maverick, Music and Lyric by Lady Gaga and BloodPop
—“Lift Me Up” from Black Panther: Wakanda Forever, Music by Tems, Rihanna, Ryan Coogler and Ludwig Goransson; Lyric by Tems and Ryan Coogler
—“Naatu Naatu” from RRR, Music by M.M. Keeravaani; Lyric by Chandrabose
—“This Is a Life” from Everything Everywhere All at Once, Music by Ryan Lott, David Byrne and Mitski; Lyric by Ryan Lott and David Byrne

Best Animated Short Film
—The Boy, the Mole, the Fox and the Horse—Charlie Mackesy and Matthew Freud
—The Flying Sailor—Amanda Forbis and Wendy Tilby
—Ice Merchants—João Gonzalez and Bruno Caetano
—My Year of Dicks—Sara Gunnarsdóttir and Pamela Ribon
—An Ostrich Told Me the World Is Fake and I Think I Believe It—Lachlan Pendragon