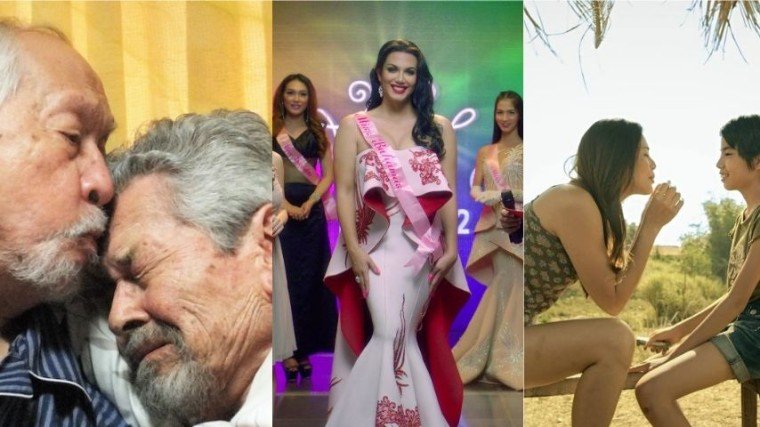 Pride Month is almost over and we now await for the annual Metro Manila Pride March where members and allies of the LGBTQ+ community take it to the streets for the recognition of rights and equality of people regardless of their sexual identity.

In anticipation for the biggest LGBTQ+ event of the year, we have collated some of the best local LGBTQ+ films you could binge watch with family and friends in celebration of love, equality, and pride! Check out our suggestions right here:

It was always Trisha Echeverria (Paolo Ballesteros)’s dream to become a beauty queen, religiously joining beauty pageants left and right to get the coveted crown and title. Yet, as you watch further, this comedy-drama film is more than someone’s dream of being queen. It’s about the life of becoming transgender and the challenges they face along the way--within family, friendships, and society.

In this Jun Lana flick, you get to see the struggles different people from the LGBTQ+ community face in their lives and how they are seen within society with lessons on acceptance and grit along the way. This movie earned Ballesteros a Best Actor Award in the 29th Tokyo International Film Festival.

Alex (Jasmine Curtis-Smith) is an openly lesbian jill-of-all-trades who juggles multiple jobs, yet her main struggle is her feelings towards her best friend Jess (Louise de los Reyes). Her sexual identity is already known to most people, except for Jess who, after finding out about Alex’s open secret, begins to question her own sexuality and explore the possibility of falling in love with her best friend.

This directorial debut by Samantha Lee is part of the Cinema One Originals film festival in 2016 wherein it garnered three awards: Best Sound, Best Actress (for Curtis-Smith), and Audience Choice.

Set in the late 1990s after the eruption of Mt. Pinatubo, this coming-of-age Petersen Vargas film depicts the life of Felix (Khalil Ramos), a social outcast in high school whose life takes a turn after meeting the half-American transferees Snyder Brothers, Magnus (Ethan Salvador) and Maxim (Jameson Blake).

Felix would develop feelings towards Magnus whom he would have a close friendship with. His relationship with the younger Snyder would bring to light an inner desire he has never felt before, which would entangle with the dark, mysterious motives behind the private life of the two boys.

In this family drama, former senator Ramon Estrella (Eddie Garcia) comes out as gay to his family to take care of his long-time lover Fredo (Tony Mabesa) who falls ill to cancer. He temporarily leaves his wife (Gloria Romero) and children (Tirso Cruz III, Aiko Melendez, and Sunshine Dizon) to live with Fredo in what might be his last remaining days on earth. While he takes care of his beloved, Ramon’s family begins to fall apart with their own troubles, leaving him torn between focusing on his family or Fredo.

After watching a documentary about “comfort women” who were forced into sexual slavery during the Japanese occupation of the Philippines, Walterina Markova (Dolphy) spills his own story to the press as a “comfort man” during the same era. From falling victim to an abusive older brother, Markova and his friends find refuge into an even painful suffering--the hands of Japanese soldiers who, like the women he saw in the documentary, forced them into sexual slavery, as well, in order to survive.

Director Gil Portes not only showcases a perspective of a comfort man in the Japanese era, but also the suffering homosexuals had to go through in the 1940s. This movie bagged multiple accolades from different national and international award-giving bodies such as the FAMAS Awards, the Gawad Urian Awards, the 2001 Brussels International Film Festival, and the Young Critics Circle.

With all her children moving out, Shirley (Vilma Santos) decides to move out of the Philippines to move in with her son Mark (Luis Manzano) in New York City. Upon arriving in the States, Shirley is picked up by Noel (John Lloyd Cruz) who she thought was hired by Mark to pick her up. Upon arriving at Mark’s apartment, she sees pictures of Mark and Noel being affectionate towards one another, with Shirley realizing that they are, in fact, together.

This Olivia M. Lamasan film depicts a mother who must face the reality of her gay son having a lover. This story shows lessons on acceptance, which the LGBTQ+ community is fighting for this upcoming Pride, and how family remains a big part in their lives.

In this coming-of-age film, 12-year-old Maximo “Maxi” Oliveros (Nathan Lopez) develops feelings for a policeman named Victor (JR Valentin) after the latter saves him from being molested by two men. Despite forcing to confront his inner desires, the two form an unorthodox, platonic friendship which is strained when Victor’s job leads him to Maxi’s criminal family.

This Sigrid Andrea Bernardo film tackles first love from the perspective of a young, little girl and the seed to her sexual awakening. It won Best Picture in the CineFilipino Film Festival and gave Angel Aquino a Best Supporting Actress accolade in the Gawad Urian Awards.

Viva to produce localized version of The Masked Singer on TV5