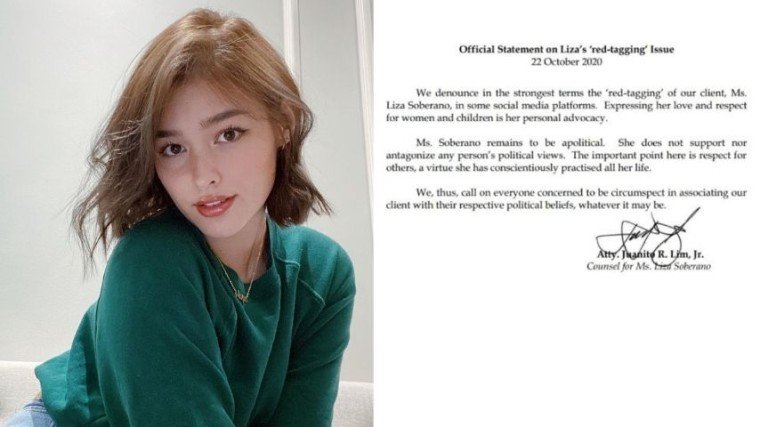 Liza Soberano, through her legal counsel, has released a statement regarding her being involved in "red-tagging" issues!

Through her legal counsel, Liza Soberano has released a statement on Thursday, October 22, regarding her issue of being red-tagged on various social media platforms.

It could be recalled that last October 13, the actress spoke in a webinar spearheaded by Gabriela Youth, calling upon all influencers to use their platforms to speak up on social issues regarding women and children.

Mga Tinig ni Nene: Reclaiming Our Voices on the International Day of the Girl Child Live!

Since her appearance, Liza has been red-tagged in numerous online platforms, most recently by a YouTube vlogger named Maui Becker.

A military official of the Armed Forces of the Philippines (AFP), who deemed the women’s group as a left-leaning organization, released a statement, warning Liza, as well as Miss Universe 2018 Catriona Gray, against working with them.

"Liza Soberano, there's still a chance to abdicate the group," Lt. Gen. Antonio Parlade, Jr., AFP South Luzon commander, said in a statement. “If you don’t, you will suffer the same fate as Josephine Anne Lapira.”

"The choice is yours Liza, and so with you Catriona," he added. "Don't follow the path Ka Ella Colmenares took in the underground and NPA Quezon. I am sure Angel Locsin and Neri Colmenares will not tell you this."

By October 20, Tuesday, Gabriela Youth slammed Parlade, Jr. for his statement, specifically for the degradation of their former member Lapira.

"They [AFP] continuously make use of 'red-tagging' to silence everybody, with or without organization, who speak out against [the] Duterte regime's tyrannical rule," they said in a statement.

In their statement, Liza’s legal counsels, led by Atty. Juanito R. Lim, Jr., condemned the above mentioned red-tagging issue placed upon the actress, while clarifying that her expression of love and respect for women and children is her personal advocacy.

“Ms. Soberano remains to be apolitical,” Lim added in a letter released through Star Magic. “She does not support any person’s political views. The important point here is respect for others, a virtue she has conscientiously practised all her life.”

Lim concluded the letter by calling on everyone involved in the issue to be wary in linking Liza to their respective political beliefs.

“We, thus, call on everyone concerned to be circumspect in associating our client, with their respective political beliefs, whatever it may be,” he concluded.

Read the full statement below: 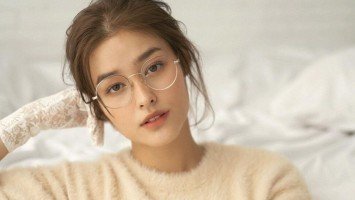 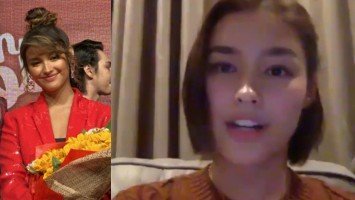 Liza Soberano on being vocal about social issues on women and children: "I fear that my nieces and my future children won't be able to go out in a safe environment."