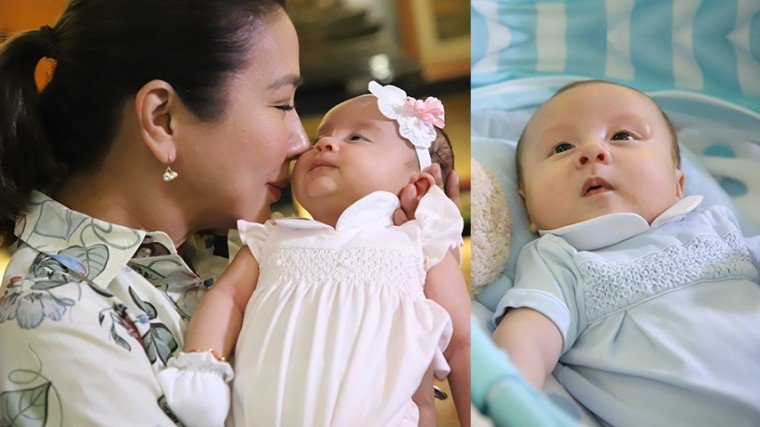 Say hello to Korina and Mar's twins Pilar and Pepe!

When Korina Sanchez-Roxas introduced her twin babies to the public last February, many were pleasantly surprised. Korina is, of course, one of most recognizable faces in the country: a broadcast journalist, former TV Patrol anchor, and host of the long-running magazine show Rated K.

Indeed, for most of her life Korina has been known as a storyteller. Now, at 54, she is basking in her newest role: that of a mother to Pepe and Pilar.

Yes, the journey to motherhood took Korina longer than expected. But for the first-time mom, it is all worth it.

Korina became a journalist when she was just 21. Friendly and hardworking, she steadily rose through the ranks of ABS-CBN’s news and public affairs division, eventually bagging the spot of anchorwoman.

Though Korina was in the public eye, not everyone knew that she was battling endometriosis. The painful disorder, in which the uterine lining grows outside of the uterus, brought with it a host of symptoms—infertility being one of them.

Korina says matter-of-factly: “I already had a difficult time in the beginning because I really am incomplete.

“I had endometriosis very early in my life at past 20 and I already knew that even if I had gotten married earlier that I would have difficult time conceiving so I was battling endometriosis for most part of my 20s and early 30s.”

Her battle with the disease left her, literally, incomplete—as she had to have one and a half of her ovaries removed.

“So now I only have half an ovary left.”

Even then, Korina was conscious of the fact that her biological clock was ticking, likely faster than other women’s due to her endometriosis. But the journalist’s desire to be a mother took the back seat to her idea that, first and foremost, she had to find the “right guy” for her—a guy who would make for a good husband and father.

It was only when she was dating the senator that Korina felt, more than ever, that she wanted to be a mother. The journalist asked her then-boyfriend to be her donor for her oocyte cryopreservation, also known as egg freezing.

Mar, however, agreed to donate—and thus started what must have been one of Korina’s longest “personal projects” to date—that is, to have a baby of her own.

It was a project that would span more than a decade and require Korina to be, in her own words, “unrelenting” in her journey to become a mother.

“I didn’t think that I would ever have (kids) pa,” she says of her mindset at the time. But in her heart, she knew that if she didn’t at least give it a shot, she would regret it down the line.

Says the journalist: “I don’t like living with regret. And before I regret not trying, I’ve got to try.”

“Motherhood is not defined by whether you carried the baby or not. It probably doesn’t matter whether ampon yan, dugo mo, hindi. I think motherhood is about the bond and the care that you give the child. And the child knows who his or her mother is, depending on who gave him or her the love and the inspiration while growing up.”

So she tried—and she succeeded. After being turned away by two specialists, Korina finally got her eggs frozen in 2008, with the help of a Belgian-trained Filipino doctor.

Lovelife-wise, things were also progressing for the TV Patrol anchor. On October 27, 2009, she tied the knot with Mar in front of 2,000 guests at the Sto. Domingo church in Quezon City.

Without a doubt, Korina had already found the right guy—so having kids must have been her next step, right?

“And in between, alam mo naman ako, si constant gardener ako. I always have projects—project dito, project doon, napunta na sa aso at pusa,” she recalls with a laugh.

Korina thinks that at the time, she did not feel the need to rush because she was always surrounded by children—including her nieces and nephews and the many kids she met while doing Rated K.

This would change in 2016, when Mar lost his presidential bid to then Davao mayor Rodrigo Duterte. Korina, already in her 50s, just knew that the right time had come for her and her husband to be parents.

To put it simply, things were set into motion—and years after Korina started her personal project to have a child of her own, motherhood was finally in her horizon.

Pepe and Pilar were born on February 12, 2019, two days shy of Valentine’s Day. Meeting her children, Korina admits, was “a little weird,” if only because she didn’t carry them in her own womb.

“It was a little weird for me having these kids and I’m their mom and yet I didn’t carry them,” she says, pausing for a moment.

But more than guilt, Korina also remembers feeling immense strength—the kind that a woman can only feel when she becomes a mother.

“Pero apparently it’s normal. Whether or not you are the one who carried, the feelings are the same.

Besides, she says: “Motherhood is not defined by whether you carried the baby or not.

“It probably doesn’t matter whether ampon ’yan, dugo mo, hindi. I think motherhood is about the bond and the care that you give the child. And the child knows who his or her mother is, depending on who gave him or her the love and the inspiration while growing up.

For Pepe and Pilar, it will definitely be Korina.

The first-time mom also says that having children at her age comes with its own benefits, first of them being knowledge.

Though she has no hands-on experience, Korina has watched many of her mommy friends undergo trials and tribulations—and she has learned alongside them.

“Siguro naman dapat may pinagkatandaan ako ’no, hindi ba? There should be, there should be an advantage to having kids this late in your life and I should apply it. Otherwise it’s just whimsical to have kids at this age.

Even before she laid her eyes on her son and daughter, Korina already thought of them as angels.

Just before Christmas, the car that the twins’ surrogate mother was driving was hit by a drunk driver. Thankfully, no harm came to the surrogate mom—but the incident left an impression on Mar and Korina.

“There should be, there should be an advantage to having kids this late in your life and I should apply it. Otherwise it’s just whimsical to have kids at this age.”

Korina, on the other hand, thought that heaven had a part in it.

The happy mom adds: “Alam mo ang weird, every time na I put them in the same spot to change their diaper where there changing table is, there’s a blank spot in the ceiling.

“All white, there’s nothing there. Every time I put them both of them there, they just start laughing and talking there in that the same spot.

Korina’s parents, Ramon and Celia, both passed away in 2004.

With two angels in her midst, Korina is fully enjoying all the joys of motherhood. Her favorite, she says, is “to just be the first face they see when they wake up in the morning and they will smile at me and I’m their first conversation.

When reporters remarked that Pilar seemed to have a future in showbiz, Korina agreed and added: “Tawag ni Mar diyan Pilar Superstar.”

According to Korina, “tsismosa” as Pilar may be, she is also mabait. The mom lists all of her daughter’s good attributes in one go: “even tempered, very patient, very mabait, mahinhin, sacrificial, martir, ’tapos friendly, sociable, easy.

At this point, she and the reporters around her burst into laughter—but not as loud as when she speaks this next line:

“Pepe, parang I want to hold off my description and wait for him to improve!”

Is the little boy the exact opposite of his sister?

“But now, we discovered, you know from readings, from Youtube, ang daming instructional, lahat ’yan pinapatulan ko, and I was told by the pediatrician na hindi na uso ’yong every three hours gigisingin mo para padede.

Of course, Korina is asked the perpetual question for new parents: who do the twins look like?

With the arrival of her children, we remark that Korina must now be complete in all aspects of life.

She may be a first-time mom, but Korina is prepared for what is to come.

And in that movie, she is credited as Korina Sanchez-Roxas - mom to Pepe and Pilar. 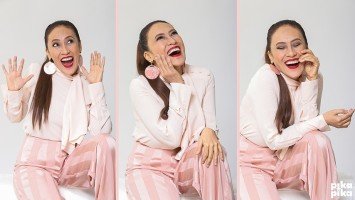