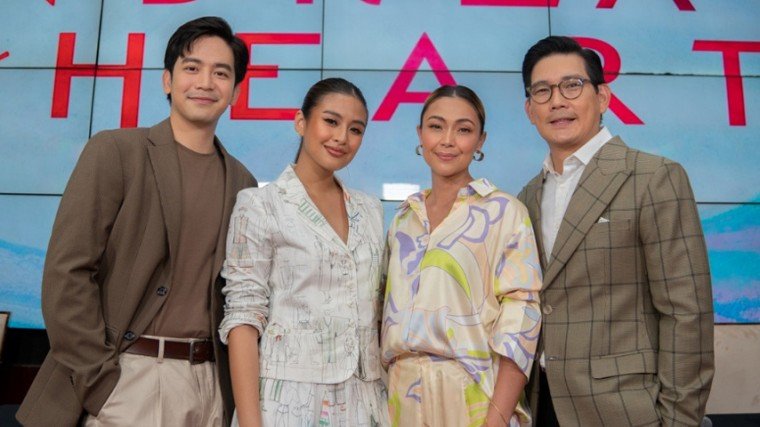 “It’s a first for Philippine TV and I’m sure it’s the audience that will be the winners in this collaboration. We’re very excited to be working with ABS-CBN on TV for the first time,” said GMA's Annette Gozon-Valdes about the Kapuso-Kapamilya volt-in project.

GMA Network and ABS-CBN Corporation have sealed a new historic partnership for the co-production of a groundbreaking teleserye titled Unbreak My Heart with a stellar cast top-billed by the premiere artists of both companies: Joshua Garcia, Gabbi Garcia, Richard Yap, and Jodi Sta. Maria.

The romantic-drama series, which will be filmed in Switzerland, will air on GMA this 2023 and stream in 15 territories outside of the Philippines on Viu, PCCW’s leading pan-regional over-the-top video streaming service.

“It’s a first for Philippine TV and I’m sure it’s the audience that will be the winners in this collaboration. We’re very excited to be working with ABS-CBN on TV for the first time,” said Annette at the story conference held on the same day.

“This is a milestone in the industry. We're thankful for this opportunity and we're very happy to work with GMA to serve our audiences. We unite as one team. We never imagined that this was going to happen,” said Cory.

“Today, we are able to proudly showcase that on our platform with premium Filipino content not just for Filipino audiences but also for global audiences to appreciate and enjoy. This is with a vision of bringing the best of the Filipino talent on-cam and off-cam to the world,” said Garlic.

Joining the ensemble cast of Unbreak My Heart are Maey Bautista, Will Ashley, Bianca de Vera, Nikki Valdez, Eula Valdes, and Laurice Guillen. It's to be directed by Emmanuel Q. Palo and Dolly Dulu.

Viewers can expect an exciting collaboration as the teleserye marks the first project of Jodi with young stars Joshua and Gabbi, who will also be paired together for the first time ever. Meanwhile, Jodi reunites with Richard, her former on-screen partner.

"I’m really proud, honored, and excited to be part of this show which is history in the making since this is the first time that two network giants will be working with each other. Of course I’m also excited to be working with Jodi again and all the other people in the cast," said Richard.

Watch out for Unbreak My Heart this 2023.