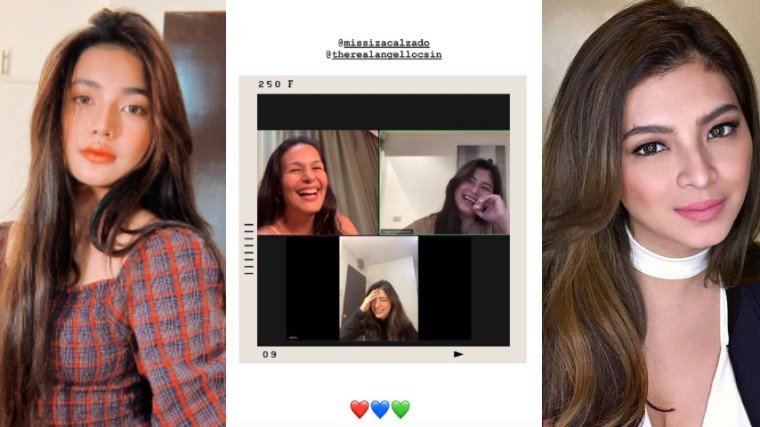 Past and present Darna actresses Jane De Leon and Angel Locsin appear to be in good terms after speculations that they are in conflict after clashing opinions over their way of support for ABS-CBN!

With rumors flying that they are in conflict following different views of showing support for ABS-CBN, Jane De Leon and Angel Locsin appear to be on good terms as they talk via video call last Wednesday, July 23.

The past and present Darna actresses were seen in a screenshot of a video call in the former's Instagram Stories. They were joined by fellow Kapamilya actress Iza Calzado.

The screenshot of the call was captioned with heart emojis that bore the memorable colors of the ABS-CBN color.

Jane did not add more details of her call between the two actresses.

Her update came in the middle of the rumoured conflict between her and Angel. It could be recalled that their respective viral posts on the ABS-CBN shutdown would allow netizens to speculate that they have clashed in opinions, with some surmising that the 35-year-old slammed the 21-year-old for what she said.

Angel has been present in protest rallies for ABS-CBN, joining its employees and hee showbiz colleagues in solidarity. She took to the streets of the media giant to air her sentiments about its shutdown and the loss of livelihood for its employees.

Jane, on the other hand, opted to share her thoughts through social media, citing the COVID-19 pandemic as the reason why she is not able to take it to the streets.

The quote was compared to a statement made by Locsin on her Instagram Stories, prompting netizens to guess that the latter's statement was for the Darna successor.

"No one asked you to go a rally,” Angel said. “Obviously, you don’t need to go out to use your voice for the voiceless. But making up an excuse to save face at the expense of those who are fighting for their lives is purely disgusting.”

However, Angel did not mention Jane in any of her posts.

Jane's Instagram Story about her video call with Angel and Iza is her first time to address the rumored rift.

Angel has been vocal about her celebrity colleagues who have remained neutral amidst the issue of the ABS-CBN shutdown.

"Kapag hindi tayo nagsalita, kinampihan natin ang mali!" she said in a speech in front of ABS-CBN employees during their noise barrage.

Apart from her and Angel, Darna has been portrayed by the likes of Vilma Santos-Recto, Lorna Tolentino, Marian Rivera, and Gina Pareño.