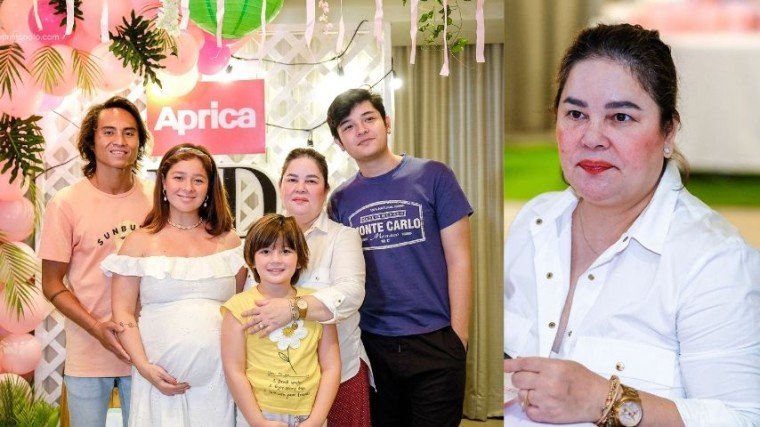 Jaclyn Jose gave a straight-faced  reaction  when  asked  about  the  initial  fear  that her  daughter  Andi Eigenmann’s boyfriend Philmar Alipayo felt when they first met.

“Di ko alam kung bakit siya natakot,” the award-winning actress told pikapika at the baby shower thrown for Andi, who’s due to give birth to her and Philmar’s first child together in a few weeks. The baby shower, which doubled as Andi’s advance birthday party, was held June 22 at the Rockwell Center in Makati City. It was organized by the baby stroller brand, Aprica.

Jaclyn was reacting to the story Philmar, a champion surfer, shared during his appearance in the June 17 episode of the ABS-CBN morning talk show, Magandang Buhay, in which Andi was the guest star. He recalled that a few days before coming face-to-face with Jaclyn, he was having nightmares because he was too scared of her.

Jaclyn, who’s known for her intense onscreen portrayals and quiet but intimidating demeanor, explained that a lot of people get the wrong impression of her. “Lahat naman gano’n ang sinasabi pag hindi lang nila ako kilala,” she said. “Pero pag kilala nila ako, I’m nice to be with naman.”

Jaclyn and Philmar have since become at ease with each other. In fact, she’s not too worried about her daughter’s pregnancy this time around, which happened seven years after Andi gave birth to her first child, Ellie. “Nandiyan naman si Philmar, e. At least may nakatutok,” the gorgeous lola pointed out.

Last February 1, Andi herself announced through a “body update” post on Instagram Stories that she’s in the family way. Back in June 2011, Jaclyn confirmed in an interview aired on ABS-CBN’s daily newscast, TV Patrol, that her daughter, then 21 years old and had a blossoming acting career, was pregnant. “Hindi madali, pero kailangan kong tanggapin. Kasi mahal ko siya at anak ko siya,” she tearfully said.

She noted that Andi now knows how to handle her pregnancy in a mature way. “Although parang bata pa rin, pag naglakad siya,” she said, adding that she’s “nai-stress” whenever she’d see posts on Andi’s Instagram account showing the pregnant girl’s athletic lifestyle, like for a time, surfing in Siargao, where Philmar hails from.

Jaclyn considers her first apo, Ellie, like her own child, too, and she’s all praises to the girl who turns eight in November. She wondered aloud if there could anybody be better than Ellie, even Ellie’s on-the-way baby sister. “Oh, my God, wala pa akong nakitang ganyan,” she exclaimed. “She’s so nice, loving, walang problema. Ang ganda-ganda niya. ’Yung ganda niya ’yung maaliwalas. She’s pleasant. ’Yung bukas, ang light.”

Jaclyn is similarly excited to take care of another girl, and she’s happy that Andi has opted to give birth in Metro Manila. For the last few years now, Andi has decided to pursue a surfer’s life, first in Baler town in Aurora province, and then in Siargao island in Surigao del Norte province. Andi and Philmar are building a house in Siargao that will also serve as a bed and breakfast.

After Andi gives birth, she and Philmar will go home to Siargao with their newborn in tow, as Ellie spends half of her time between her mom Andi and dad Jake Ejercito. Then it will be Jaclyn’s turn to visit her daughter and baby granddaughter out of town. “Walang choice. Mukhang gano’n na nga,” she said.

Apparently, Jaclyn wasn’t receptive to Andi’s decision to lie low from showbiz. “Wala akong magagawa,” she pointed out. “Ang akin, phase lang siguro ’yun. I’m sure the passion will always be there. No’ng unang gusto niyang mag-artista. Sabi ko, ‘Is it just for money, fame, or passion? Money and fame will always go away. But the passion will stay in your heart.’ She said passion. So it’s there. Babalik at babalik siya.”

For her part, Jaclyn sees herself acting until her sunset years, just like the recently deceased Eddie Garcia, who was an actor till the age of 90. “Ang sarap, e,” she said of her profession and passion.  “I’m in love with creating, introducing characters to a society no matter who she is.  Sometimes you just want to jump into another character just to be someone else for a day. That is helping me a lot in growing and liking life.”

Jaclyn said she won’t forget Eddie’s humility and good humor. When she won Best Actress  at  the  Cannes Film Festival in 2016, for instance, she had the pleasant surprise of being praised by the legendary actor. Mimicking Eddie’s deep and commanding voice, she recalled what he told her: “Congratulations, Miss Jaclyn! You made it! You made us proud.”

Andi Eigenmann is one happy momma

Andi Eigenmann: Hopeful for the future