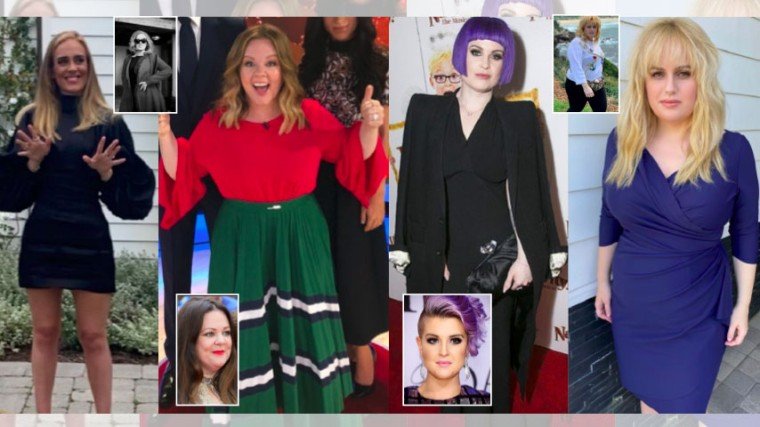 Being an international celebrity has its perks, but it also has its downside. Ang being a woman in a world where bodies are constantly scrutinized, is just one chapter. Each talented woman has their own reason on taking the challenge of losing weight. And they all hope to be an inspiration to many women who has struggled with their weight and the ability to love themselves again, even more.

Singer Adele, comediennes Melissa McCarthy and Rebel Wilson, and TV host Kelly Osbourne all took a journey to discover their new selves as healthy and strong women, who just want to enjoy life.

Being an international celebrity has its perks, but it also has its downside. Ang being a woman in a world where bodies are constantly scrutinized, is just one chapter.

Each talented woman has their own reason on taking the challenge of losing weight. And they all hope to be an inspiration to many women who has struggled with their weight and the ability to love themselves again, even more.

ADELE
Adele, the multiple Grammy Award-winning singer who dazzled the world with her unique singing voice has found the way to lose all that incredible weight she has carried for so many years.

Just recently, she posted on Instagram her unrecognizable photos while taking a holiday on a beach in Anguilla and attending a festival in Notting Hill.

The "Someone Like You" singer has lost more than a 100 pounds and she is loving it.

According to a source, Adele is trying out The Sirtfood Diet. It encourages slimmers to eat plant foods such as kale and buckwheat. The diet allows slimmers to eat dark chocolate and drink red wine, as they are high in sirtuins.

For years, Adele has struggled with her weight since she shot to fame in 2008. She once worked with hypnotherapist Susan Hepburn help her achieve her dramatic weight loss. But to put it all together, Adele isn't sensitive about her size.

In one interview with People, Adele refused to work with anybody who had an issue with her size.

"Even when I was signing a contract, most of the industry knew if anyone ever dared say: 'Lose weight' to me, they wouldn’t be working with me. I can’t be a product; no one can do that to me. I have all the say; I have power over everything I do. Weight has nothing to do with my career."

But for the benefit of being healthy for her child, Adele started to eat healthy and take charge of her weight.

MELISSA MCCARTHY
Being a box-office star, a two-time Oscar nominee and an Emmy winner, Melissa McCarthy has no reason to fret over her weight.

But turning 50, the actress realized that her health is more important then any recognition in the world.

The funny lady wants to be an inspiration when it comes to weight loss and body positivity.

Melissa said in 2013: "I've been every size in the world Parts of my twenties, I was in great shape, but I didn't appreciate it. If I was a six or an eight, I thought, 'Why aren't I a two or a four?’ Now I feel like I have two great kids and the dreamiest husband on the planet, and everything else is just a work in progress."

When Melissa landed the role of Sookie in the series Gilmore Girls in 2000, she attempted a doctor-supervised all-liquid diet, which led her to lose 70 pounds in four months.

"But I’d never do that again. I felt starved and crazy half the time," she says.

As her career took new heights, Melissa's weight was magnetized and every body wants a piece of it.

Melissa recalls an insident with a writer from InStyle: "He kept asking, 'Are you shocked that you actually work in this business at your tremendous size?' He was like, 'Oh, your tremendous size, you can actually work?' I just remember all the blood drained out of me. I thought, 'With my tremendous size, I could tackle you so quickly.' There were two cameras on him, and one was on me, and he went back to that question three or four times, and I just kept talking about the script or how fun Paul Feig was. He was looking around like, 'She’s crazy.' When we left, their producer was horrified and said, 'We’ll never play what he said. I’m so sorry.' Not to be a jerk or single him out, but when John Goodman was heavier, did anybody ever talk about his girth?"

Because of Hollywood's obsession with slimmer bodies, Melissa struggled to find designers to dress her for awards shows.

"When I go shopping, most of the time I'm disappointed. Two Oscars ago, I couldn't find anybody to do a dress for me. I asked five or six designers—very high-level ones who make lots of dresses for people—and they all said no."

This led the actress to design clothes for Lane Bryant under her own line, Melissa McCarthy Seven7 line in 2015.

“Women come in all sizes. Seventy percent of women in the United States are a size 14 or above, and that’s technically ‘plus-size,’ so you’re taking your biggest category of people and telling them, ‘You’re not really worthy.’ I find that very strange. I just think, if you’re going to make women’s clothing, make women’s clothing. Designers that put everyone in categories are over-complicating something that should be easy. I’ve been every shape and size that’s out there, and I just found it harder and harder to find stuff.

"I thought, I’m modern and young and want to wear what everybody else is wearing. Why is this such a strange request? I just wanted to make it a little smaller and more accessible. I wanted to work on keeping prices down and for it to be for everyone. I could eat healthier, I could drink less. I should be learning another language and working out more, but I'm just always saying, 'Ah, I could get hit by a bus tomorrow.'"

In 2015, Melissa lost 50 pounds by changing the way she thinks about her weight.

"I truly stopped worrying about it. I think there's something to kinda loosening up and not being so nervous and rigid about it that, bizarrely, has worked. No trick, nothing to tell, just super-boring life. You bring it real down, you don’t do anything fun, and you go to bed at 7:30—that's the trick."

In 2016, Melissa shared on Instagram an empowing message on body positivity.

“We have to stop categorizing and judging women based on their bodies. We are teaching young girls to strive for unattainable perfection instead of feeling healthy and happy in their own skin. Imagine we are linked not ranked."

REBEL WILSON
The Australian star of Pitch Perfect shared earlier this year that 2020 will be her "year of health".

Rebel Wilson's goal was to achieve a weight of 165 pounds by prioritizing exercise and a combination of her eating plan called the Mayr Method.

"Okay so for me 2020 is going to be called 'The Year of Health,' So I put on the athleisure and went out for a walk, deliberately hydrating on the couch right now and trying to avoid the sugar and junk food which is going to be hard after the holidays I’ve just had but I’m going to do it!" she shares on Instagram.

Rebel has been working out with trainer Jono Castano up to seven days a week. The actress recently shared a new intense move in her routine: flipping tires.

Rebel captioned the video: "Starting the week off right! Look out @chrishemsworth & @liamhemsworth 👀 Australia’s latest action hero is turning it up! 💪🏻."

Her routine also includes stair sprints and bouts with battle ropes. It's all about high-intensity interval training.

Rebel knew about the Mayr Method while visiting a luxury medical detox and wellness center in Austria called VivaMayr. The Mayr Method is based on the “Mayr Cure,” created by Dr. Franz Xaver Mayr, an Austrian physician, nearly 100 years ago. Mayr believed that most people are poisoning their digestive systems with the foods they eat and how they eat them. So the goal is to improve health through digestion.

In July, Rebel revealed her exact weight loss goals in a now-deleted Instagram post: "I’ll be honest with you guys—with my 'Year of Health' mission I’m trying to get to 75kg’s and career wise am trying to get one of my movies into production before the end of the year! Both of these things are requiring a daily effort and there’s constant set backs—but I’m working hard x" (FYI 75 kg is roughly 165 lbs.)

KELLY OSBOURNE
TV host Kelly Osbourne shocked social media when she posted her on Instagram her new slim body. She lose a total of 85 pounds during lockdown.

In her podcast, Hollywood Raw, Kelly revealed that she underwent gastric sleeve surgery and called it the “best thing I’ve ever done.”

“I had surgery; I don’t give a f--- what anyone has to say. I did it, I’m proud of it… I did the gastric sleeve. All it does is change the shape of your stomach. I got that almost two years ago. I will never ever, ever lie about it, ever. It is the best thing I have ever done.

"The kind of surgery I had… if you don’t work out and you don’t eat right, you gain weight. All it does is move you in the right direction. So, anyone who’s thinking of doing something like this, really think about that.”

Kelly also revealed that she had a year of therapy to prepare her for a life change.

“What people don’t realize is, it cuts out this hormone that if you have addiction issues, it stops your craving and it makes you not emotionally eat, which is a huge problem for me. All it is, is a push in the right direction. It doesn’t solve all your problems. It’s not a quick fix. The number one thing I had to do was get happy. I had to fix my head before I could fix my body. You can never go into this if you’re not in a good mindset.”

During the process, Kelly also gave up drinking with no regrets.

“I really wanted to fix the things that were broken in me. I’m not perfect. I still make a lot of mistakes. I have bumps in the road, I fall down, I get back up again.

"I didn’t do this for anyone. It was a long process, and now I’m here and everybody is noticing.”