From “try-sexual’ PR boss in Sex and The City; Kim Cattrall now plays as a wealthy widow in Filthy Rich 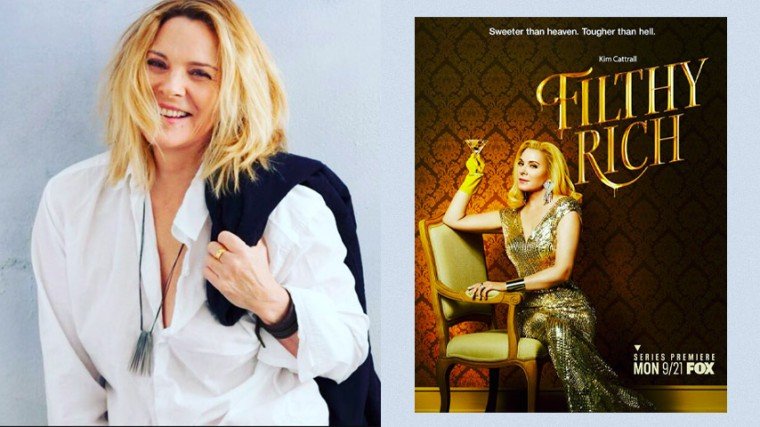 In the series created by Tate Taylor, Kim plays Margaret Monreaux, a widow of Eugene Monreaux, a wealthy Louisiana CEO of the number one Christian network in America. After Eugene’s sudden death in a plane crash, Margaret discovered that his philandering husband fathered three more children.

Sex and The City star Kim Cattrall has reasons to be happy despite the ongoing COVID-19 pandemic.

Her new show for Fox titled Filthy Rich, a dramedy series set in the gothic South, had its premiere last September 21.

In the series created by Tate Taylor, Kim plays Margaret Monreaux, a widow of Eugene Monreaux, a wealthy Louisiana CEO of the number one Christian network in America. After Eugene’s sudden death in a plane crash, Margaret discovered that his philandering husband fathered three more children.

In his will, the company will be divided amongst his offsprings and Margaret will make sure her two children will get the big share despite of what the will states.

The pilot for the Fox series was shot just after Mardi Gras in February 2019, and the cast didn’t finish filming until January 2020 just before COVID-19 halted all TV and film productions for months. The series was moved from its Spring debut to the Fall 2020 lineup.

Kim says playing Margaret is far from her sexy PR boss role in Sex and The City that she played for six seasons and in two film versions.

“It's almost like a personal interest as well as a great, flashy, fun role to play, with some really talented people to guide me.

“When Tate Taylor sent me the script, I gobbled it up. It was really funny, and I love the characters, and I didn't know that world at all.”

Cattrall took inspiration from a few people she knew personally and three biographies of Margaret Thatcher to inspire her for the role of Margaret.

“There was something about her leadership and always wanting to do the right thing and working so hard and being earnest that I felt was helpful.

“Actors, when they usually do a Southern accent, it's kind of all over the map. But this is a very specific Louisiana sound. I really wanted that to be real and work for the show and work for the character.

“Margaret is an entertainer, and she knows how to work an audience. She's a manipulator. I realized that our show needed that.”

With a new direction in her career, the 64-year old English-Canadian actress has put behind her the long feud with SATC co-star Sarah Jessica Parker.

“Everything is on Google, so I encourage you to Google it, about anything that I've said. I feel that that was then, and when I look at what's going on around me, I just don't have any regrets.”

Since the height of the pandemic, she has retreated to Vancouver Island with her partner, Russell Thomas.

Keeping Up With The Kardashians, mag-gu-goodbye na after 14 years